Attorneys for suburban Dayton resident Brock Turner, who was convicted of assaulting a woman behind a dumpster at Stanford University, say he was treated unfairly during his trial. 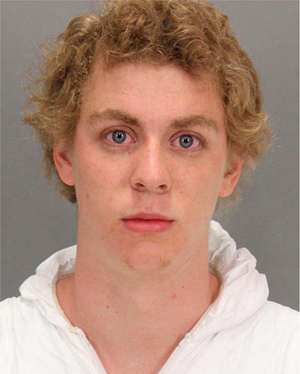 Brock Turner after his arrest for sexual assault

Hello all. Did you make it out to see Sanctuary, an exhibition of art and objects — celebratory, difficult, complicated — that legendary writer (and former CityBeat columnist) Kathy Y. Wilson has amassed? It’s like stepping into her East Walnut Hills apartment. Go. Have a seat on her couch. But be prepared for some frank, intense conversations. I went to the opening Friday at the Weston Art Gallery and was blown away.

On to the news. As we reported Friday, the University of Cincinnati revealed that UC Police Chief Anthony Carter stepped down after an investigation into “inappropriate” text messages and phone calls he made to an unnamed witness in a UCPD investigation. Carter texted a woman 171 times whose estranged husband made threats under investigation by campus police. In those texts, he allegedly invited her on social outings and generally went well beyond his role as a UCPD official. Read more about the fallout from that investigation here.

• The city of Cincinnati is asking the state of Ohio to put up $10 million for infrastructure around a proposed FC Cincinnati stadium. Cincinnati has already committed about $36 million to infrastructure from a variety of sources, and Hamilton County Commissioners have agreed to build a roughly $15 million parking garage for the project. But city engineers estimate the infrastructure needs around the soccer stadium cost between $70 million and $80 million. The stadium is on a list of 43 projects around Hamilton County that officials would like to see the state chip in on.

• Civil rights groups say the leader of Cincinnati’s police union is misusing his position and should be held accountable. The city’s NAACP branch, The Urban League of Greater Cincinnati, black police union The Sentinels and other civil rights groups released a statement last night blasting comments made by CPD officer and FOP President Dan Hils.. Those comments come after complaints against Hils by Danita Pettis, a black Cincinnati Police lieutenant. Pettis says that during an officer roll call on a day when she was off, Hils bragged to the officers she oversees  about “kicking her ass” when arresting her as a civilian 25 years earlier. Pettis also says Hils encouraged officers to file complaints against her. Pettis says that has undermined her authority with those officers and created a hostile work environment. The civil rights groups are also reacting to comments Hils has made referring to Avondale as an “urban ghetto.”

"Cincinnati Police Chief (Eliot) Isaac must hold Hils accountable, by taking appropriate corrective action,” the statement reads. “Hils statements are sure to affect the morale within the Cincinnati Police Department by sowing seeds of divisiveness and cultivating a hostile work environment, which could potentially place the public and officers at risk.”

• Would-be marijuana cultivators who saw their applications for medicinal marijuana licenses rejected by the state of Ohio aren’t happy about the process. Some are even predicting a wave of court battles over the way the state chose the businesses who will receive the state’s 24 permits to grow and sell medicinal weed, citing what they say are “irregularities” in the application process.

• Ohio resident Brock Turner is appealing his sexual assault conviction. Turner, who lives in a Dayton suburb, became a national symbol of campus sexual assault after a jury convicted him of assaulting a woman behind a dumpster at Stanford University in March last year. The woman he assaulted was discovered with her skirt pulled up and her underwear missing behind that dumpster. Turner got six months in jail in California for that assault but was released after three months and is currently serving probation while living here in Ohio. Turner’s attorneys say he wasn’t treated fairly in his trial and would like to challenge his conviction, which requires him to register as a sex offender for life.

• Ohio’s Democratic gubernatorial primary candidates will go head-to-head tonight for the third time in Cleveland. The same four contenders who appeared in the last primary debate will be there: Dayton Mayor Nan Whaley, former state Rep. Connie Pillich, former U.S. Rep. Betty Sutton and state Sen. Joe Schiavoni. Ohio Supreme Court Justice William O’Neill, however, was left off the debate program. He is protesting that move, which the Ohio Democratic Party says is due to the fact O’Neill didn’t go through their vetting process. It probably didn’t help that O’Neill made a widely reported gaffe on Facebook in which he defended U.S. Sen. Al Franken against sexual assault allegations by bragging about his own sexual exploits. Another likely contender who won’t be on stage tonight: former U.S. Consumer Financial Protection Bureau head Richard Corday. He is set to formally announce his candidacy in the primary tomorrow.