Plus, Tom DeLonge and Moby were apparently right when they said they had top-level connections in the U.S. government 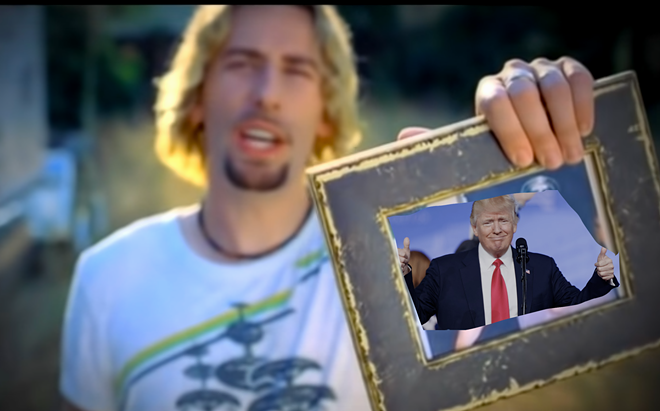 Like about 98 percent of what has happened with the executive branch of the U.S. government in, say, the past nearly three years, no one would have guessed a recent turn of events possible — this one involving eternal Rock punching bags Nickelback and the President of the United State (yes, of America!). It started when Donald Trump tweeted a video based on the “Look at this photograph” meme that used Nickelback’s song/video for “Photograph.” The video was meant to spotlight a photo of Joe Biden’s son doing something Trump and fellow conspiracists believe proves Biden was involved in some kind of corruption in Ukraine. The Canadian band (or their label or other reps) filed a copyright complaint over the meme, which resulted in the president’s Twitter page now showing Trump’s all-caps exclamation “LOOK AT THIS PHOTOGRAPH!” with a notice that the video had been removed. If you need another dimension of weirdness to convince you that there is a glitch in The Matrix — Nirvana bassist Krist Novoselic got involved by tweeting his support (nay, his LOVE) for Nickelback after Fox News (jokingly?) compared the band to… socialism? (Imagine waking up from a three-year coma and reading the above five sentences.)

A couple of popular star musicians who made comments that were written off as being loony are probably feeling pretty good about themselves lately. Many wrote off former blink-182 singer/guitarist Tom DeLonge’s statements about UFOs as the ramblings of a madman, but the musician — co-founder of the To the Stars Academy of Arts & Science (a UFO research org) — was reportedly correct about some classified info he said he received from internal government sources. In a recent interview, a Navy spokesperson confirmed that images depicted in three videos DeLonge had shared were indeed considered “unidentified” flying objects, though not (necessarily?) aliens. Experts said it was unusual for the Navy to use the words “unidentified,” as officials usually publicly offer explanations that dismiss such objects as drones or weather balloons or some other aircraft.

Before Moby got canceled for saying creepy things about Natalie Portman, he was extremely online and a vocal part of the internet “resistance” to Donald Trump’s administration. The musician would sometimes say he had inside knowledge through connections in the government and intelligence community, which drew a lot of eye-rolls. But now those connections appear confirmed. A recent New York Times article chronicled the goings-on of Val Broeksmit, son of a Deutsche Bank exec who died, leaving behind several “secret” documents that potentially contained information about Trump’s dealings with the bank (Trump received huge loans from Deutsche Bank after being denied by several other financial institutions, raising suspicions of questionable dealings). The report says that Broeksmit went to a Hollywood party where he was introduced Moby. When told of the Deutsche Bank documents, Moby is said to have introduced Broeksmit to his friend, Chairman of the House Intelligence Committee Adam Schiff, who has reportedly since subpoenaed the documents for investigation.