"Strawberry Hill" is the third track to be released from Kennedy's forthcoming EP, 'Cadmium,' which is due just before the end of the year 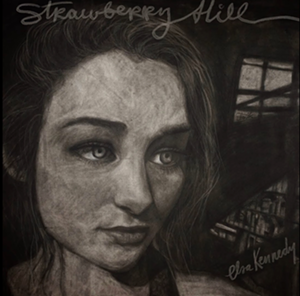 In September, Cincinnati singer/songwriter Elsa Kennedy released the exquisite track "Redwoods," the first of four songs set to release each month through the end of the year. Following the next song's release later this month, the four tunes will be collected as an EP titled Cadmium.

Last week Kennedy dropped the third Cadmium cut, "Strawberry Hill." Though only three of the four tracks from the EP have been unveiled, it's already crystal clear that it will be a magical, poetic, diverse and wildly compelling release. "Redwoods" features just piano and vocals, while October's "Cripple Punk" bounces on a dark cabaret vibe (think Tom Waits and The Dresden Dolls jamming at a Parisian speakeasy), with unique soundscaping recorded with renowned local guitarist Ric Hordinski and veteran drummer Joshua Seurkamp.

"Strawberry Hill" strips everything back down, this time to just acoustic guitar and vocals. The connective thread between all of the songs is, of course, Kennedy's enigmatic songwriting and voice, which is layered hypnotically in heavenly harmonies. The unflinching honesty and emotional directness of the first two tracks are also in full force on "Strawberry Hill" — so much so that it was physically difficult for Kennedy to perform the song at first.

"'Strawberry Hill' is all of my unclosed grief," Kennedy says via email. "For the first few months after I wrote it, I couldn’t sing it without crying. It's so powerful for me; honestly, as I tell you about this piece, I’ve started crying. Sorrow is really bizarre.

"This song is the intimate conversation I was never able to have with people I've loved dearly and lost. It’s the letter that I wish I’d been able to send before it was too late, the impossible closure that I’ve dreamt of in so much detail so many times, the sincere 'I love you, you are so important to me,' that I didn’t get time to communicate."

Kennedy confirms that, though brief, Cadmium will be quite the whirlwind listening experience.

"(The EP) will intentionally take whoever's listening on a short, intense journey," she writes, "connecting the present, the new past, the old past, and the future, into something… can’t say what, but whatever it turns out to be — in the words of my Grandma Tommy — it’ll be somethin’."

The first three Cadmium singles are available now on all streaming platforms. Visit elsakennedy.net for links and more info.