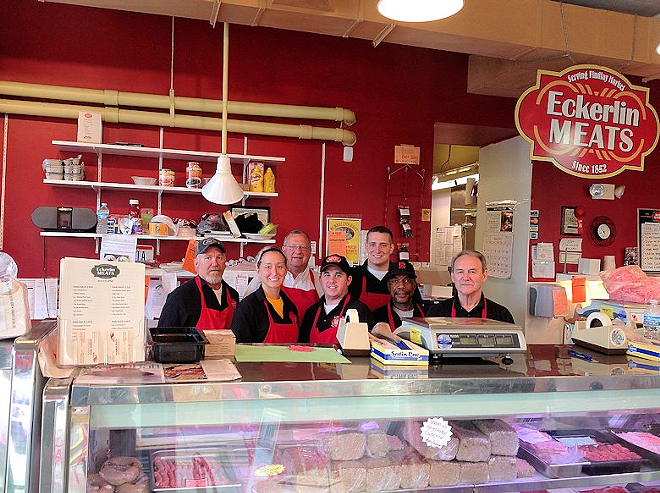 Food & Wine magazine senior editor David Landsel has once against graced a Queen City business with a "best" in the nation designation. (Landsel also named Allez OTR as one of the best bakeries in America and did a full feature on Camp Washington's mom 'n 'em.)

In his recent collection of the 100 Best Butcher Shops and Meat Markets in America, Landsel called out Findlay Market's Eckerlin Meats.

"Butchering is a commitment, and as so many pretenders have discovered, this isn’t a trend that you ride, and it's not for the weak. The battlefield is littered with failures, the ghosts of cute shops with subway tiles, the pricey, custom-made aprons collecting dust on the peg. If you’re not in this for the right reasons, the last few years have provided extraordinary clarity: you will not be around for very long," Landsel writes in his intro.

And then says of Eckerlin:

Order a freshly made breakfast sandwich stuffed with the house goetta — some of the best in a city that can’t get enough of the stuff — before browsing the overstuffed (but not for long) case at this Over-the-Rhine institution, a pillar of the historic Findlay Market experience.

Eckerlin's has been a Cincinnati institution since 1855 and is a multi-generational, family-run business.

Per the "history" page on their website, Bob Lillis, Jr. still makes their famed goetta daily:

"Bob makes 'Eckerlin's Best Goetta' every day, from a family recipe over one hundred years old. On the label is a turn-of-the-century photograph of his Grandmother Frieda's brother, Adolph Eckerlin, in his Mt. Adams butcher shop. Adolph is dapper in a dress shirt (sleeves rolled up, of course) and necktie underneath his butcher's apron. The sign behind the counter reads 'The best goetta in town.' It's the best in the world, according to many customers today."

You'll also find Findlay shoppers flocking to Eckerlin for fresh sausages, stuffed meats, multiple types of bacon and basically any cut of beef you're in the mood for.