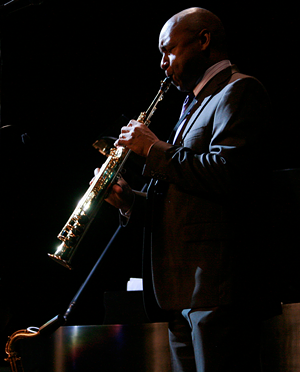 The saxophonist and composer is Jazz royalty, part of the Marsalis family dynasty that includes brothers Wynton, Delfeayo and Jason. In 2011, the brothers and their father, pianist Ellis Marsalis Jr., collectively received the NEA Jazz Masters Award, the highest honor the U.S. bestows upon Jazz musicians.

Along with his illustrious solo career and work with his quartet, Branford Marsalis has performed with Jazz icons like Miles Davis, Herbie Hancock and Dizzy Gillespie, as well as non-Jazz musicians like The Grateful Dead, Public Enemy and Sting. The saxophonist has a pair of Grammys and was nominated for a Tony for his first Broadway effort — composing the score for the revival of August Wilson's Fences, for which he won a Drama Desk Award.

Marsalis has a couple of interesting Cincinnati connections. He was the Creative Director of Cincinnati Symphony Orchestra's Ascent series in 2012-2013 (he performed with the CSO again in 2016 at the Taft). And he was a member of Sting's band when the Police frontperson performed at Riverbend on Sept. 11, 1985 — the same day Pete Rose broke Ty Cobb's record for the most hits in Major League Baseball at Riverfront Stadium.

The Branford Marsalis Quartet's new album, The Secret Between the Shadow and the Soul, is set for a March 1 release.