A local group that provides clothing for nonbinary and transgender youth is looking for a stand-alone location — and it has gotten some national attention for its efforts. 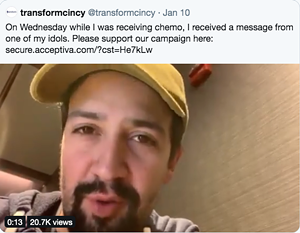 Learning how to be yourself can be hard when you're young. It's especially difficult when you're navigating questions about your gender identity.

Last September, a Cincinnati-based nonprofit called Transform launched in the back room of Nancy Dawson's makeup boutique Brideface to make that process a little easier for area transgender and non-binary youth ages 6-18 by opening up a free clothing closet.

"It is simple," the group says on its Facebook page. "Kids in transition need clothes that authentically reflect who they are and we need to protect trans kids. What we didn’t expect was the creation of community out of these carefully curated outfits."

Now, with the shop growing, the group is looking for a stand-alone location, and in early January, they launched a crowdfunding campaign to get there.

Making the drive all the more poignant — and painful — is the fact that Dawson has terminal cancer.

A week and a half after their crowdfunding campaign went live, Dawson, her daughter Ella Dastillung and cofounder Tristan Vaught have raised more than $47,000 toward their goal.

Transform has gotten a few big boosts from some big names along the way. After Dawson's husband Matt Zoller Seitz (a film and TV journalist) included information on the fundraiser in a Jan. 7 tweet that was a part of his thread about Dawson's diagnosis (he's since moved to Cincinnati to be with her), Seth Meyers, who hosts NBC's Late Night with Seth Meyers, shared the tweet, leading to a flood of interest, support and donations. Lin-Manuel Miranda, creator of the musical Hamilton, recorded a video promoting the fundraiser that was posted Jan. 10.

"I think what you're doing with Transform is incredible," Miranda said in the video. "I think you're going to change Cincinnati. I think it's really laudable."

164. When @cincinnancy was getting chemo, an amazing thing happened: @Lin_Manuel contacted her, FaceTimed for a few minutes & sent her this message praising her nonprofit @transformcincy, which gives clothes to trans & non-binary teens. Donate here: https://t.co/mSqhjO78Qv pic.twitter.com/xJSMnZb594


On Jan. 14, filmmaker Ava DuVernay (director of movies like Selma and A Wrinkle in Time) also shared a video asking people to support Transform.

"I think everyone should be able to have clothes that match their identity," she said in the clip.

167. Here is @ava on why you should donate to @transformcincy, a nonprofit that gives donated clothes to trans & non-binary teens. To donate, click here: https://t.co/rNFZs1qLJL pic.twitter.com/dE6SdqVMUA


Those messages and others have inspired more than 500 donors to contribute more than $47,000 to date.