Music Tonight: Art Vs. Science, Beneath Oblivion and More AvS keyboardist/guitarist/vocalist Dan McNamee spoke with CityBeat this week about the band's "conversion mission"/U.S. tour and how they borrow elements from various Dance music styles to create their own distinctive sound. Read Brian Baker's interview with McNamee here.

Below, check out a live video from Art Vs. Science, a recent clip from Shadowraptr and You, You're Awesome's cover of Gary Numan's "Metal."

• It's a night of Doom, Sludge and Crust as rising underground Metal locals Beneath Oblivion headline a free hometown show tonight at Baba Budan's in Clifton Heights. BO has been continuing to tour behind its latest From Man to Dust album, which was released by former local label The Mylene Sheath and has been receiving glowing reviews from outlets like Decibel Magazine and MetalSucks.com. The band will be hitting the road again in August.

Performing with Beneath Oblivion at its 8 p.m show will be Grass (Sludge band from Philadelphia), Before the Eyewall (Sludge from Columbus) and Cincy Crust Punk crew Coelacanth.

• Fans of Americana/Roots/Folk music can catch some of the area’s finest tonight at Paddlefest out at Coney Island, as WNKU presents the Roots on the River Music Festival. The fest (and parking) are free. Artists scheduled to appear (5-11:30 p.m.) include Jake Speed & The Freddies, Tex Schramm & the Radio King Cowboys, The Lewis Brothers, Magnolia Mountain and Brown County, Ind., Country Blues faves Reverend Peyton’s Big Damn Band. Full details on Paddlefest can be found here; click here for the music schedule.

Perhaps because Cincinnati is becoming such a cool city to hang out in lately, like the members of the Red Hot Chili Peppers (who hung out at the Radiohead concert and took batting practice with the Reds the night before their show in Cincy recently), the Phish phellas spent an off day in the Queen City yesterday. Singer/guitarist Trey Anastasio and bassist Mike Gordon spent at least part of the day shopping for and/or playing with gear at Mike's Music in Corryville. Check out the pics below of Trey and Mike noodling about in the store (from the Mike's Music Facebook page here). 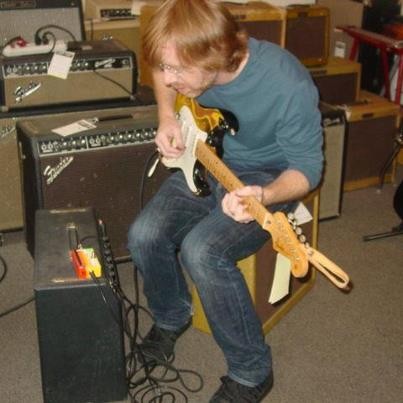