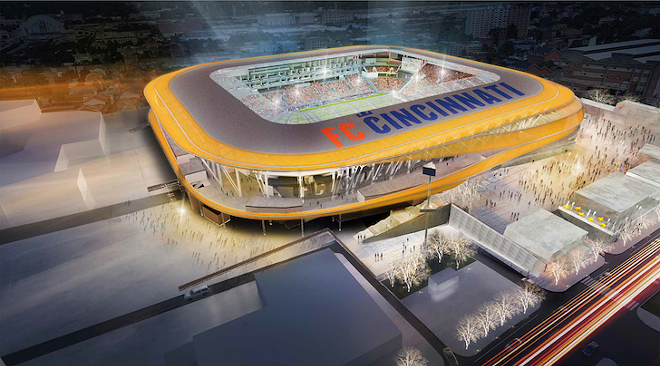 As it continues to move forward with a $250 million Major League Soccer stadium in Cincinnati's West End neighborhood, FC Cincinnati has announced an effort to hire its local workforce for the construction jobs the project will bring.

“From the beginning, we anticipated this project to be a catalyst in so many ways for our city and the community,” FC Cincinnati President and General Manager Jeff Berding said in a statement today. “One of those ways includes the trade work that fuels the stadium’s construction. The word opportunity in the project mission statement is focused at both the business level, as well as the individual level.”

As part of a community benefits agreement between the team and some neighborhood representatives, FC Cincinnati agreed to pay prevailing wages for jobs related to the stadium, to hire 25 percent minority-owned businesses and 30 percent small businesses, and to give priority to West End residents, low-income Cincinnatians and previously incarcerated applicants when hiring.

The team has recently run into some controversy around the site after revelations residents of two buildings purchased by the team are being asked to move, despite assurances the facility wouldn't cause displacement.

Work has already begun at the stadium site, which will regularly see more than 200 workers over a 12-month period and as many as 350 workers during peak construction phases. CityLink will play a major role in selecting those workers, according to the team.

“We see FC Cincinnati’s West End Stadium project as a significant platform to connect people to new career opportunities and a new path forward,” CityLink Executive Director Johnmark Oudersluys said in a statement.  “We wanted to create a program that is sustainable not only for the relatively short-term FCC project, but for the long-term investment in the industry."

CityLink, a faith-based nonprofit, houses a number of services and partner organizations — from job training to clothing and food assistance to childcare — in a single location on Bank Street in the West End.