New Coronavirus Tests Promise to be Faster, Cheaper and Easier

In the United States, the average wait time for COVID-19 test results is about four days. Even worse, 10 percent of individuals don’t receive lab results for 10 days or more.

Quick reporting of test results helps identify infected individuals so they and anyone they potentially spread the coronavirus to can be isolated, preventing further spread of the virus.

“If you have a 14-day lag to knowing if someone is actually sick and contagious, then they’ll interact with many, many more people in that period than if you have a one-day or a six-hour or one-hour turnaround,” says Omar Abudayyeh, a bioengineer at MIT.

Abudayyeh is among the many researchers and companies racing to develop new and speedier types of diagnostic tests that circumvent clinical labs altogether. Some of these tests complete their analyses in all-in-one machines that are portable enough to be set up in schools, nursing homes and offices. Several companies are developing tests like these that can diagnose COVID-19 in 30 minutes or less, with a level of accuracy comparable to lab tests. Others are harnessing the power of the gene editor CRISPR to deliver rapid results.

And another type of test, made by Abbott Laboratories and granted emergency use authorization by the U.S. Food and Drug Administration on August 26, works more like a pregnancy test. All it requires is a test card the size of a credit card, a few drops of a reaction solution and a sample from a nasal swab. Within 15 minutes, two lines appear on the card if the sample contains the virus; one line appears if it doesn’t.

The current gold standard for accurate COVID-19 testing is PCR, or polymerase chain reaction, which can detect even tiny quantities of the virus’s genetic material, RNA (SN: 3/6/20).

The test requires collecting viral RNA directly from the patient, typically gathered using a swab inserted deep into the nasal cavity. At a clinical laboratory, the virus’s RNA is converted to DNA and then run through a specialized instrument that heats and cools that DNA to multiply copies of it, making it easier to detect. After repeating the process for around an hour, if DNA shows up, the sample is considered positive for SARS-CoV-2, the virus that causes COVID-19.

Such tests are fairly accurate. They miss some people very early in the infection or because of lab errors, producing false negatives, meaning that the test results indicate someone isn’t infected when they really are. False positives — when tests wrongly indicate an uninfected person has the virus — are rare with this type of technology. So if a PCR test indicates a person is infected, they probably do carry the virus. The main drawback is the speed. It typically takes days to get results back, and backups at labs can drag the process out for a week or two.

Some people find the nasal probe uncomfortable, so other lab tests have been developed that rely on less invasive samples. On August 15, the FDA authorized a saliva-based test, SalivaDirect, for emergency use. This isn’t the first test to detect the SARS-CoV-2 virus in saliva, which is easier to collect than samples from nasal passages. But its simplified protocol speeds up sample preparation and bypasses testing supplies that have been in short supply in recent months. SalivaDirect, however, is not a rapid test. It still requires processing by clinical laboratories, which contributes to the wait time between providing a sample and receiving results.

To develop faster tests, companies are taking a variety of approaches. Funding for some of this work comes from the Rapid Acceleration of Diagnostics initiative, or RADx, from the National Institutes of Health, which has invested $248.7 million in seven companies tackling testing challenges.

San Diego–based Mesa Biotech, for instance, received RADx funding to manufacture a PCR test that replaces an entire clinical lab with a handheld dock and a single-use cartridge. The company says the proprietary technology in its Accula test, which has already received FDA emergency use authorization, can provide a COVID-19 diagnosis in just 30 minutes.

Turning on the LAMP 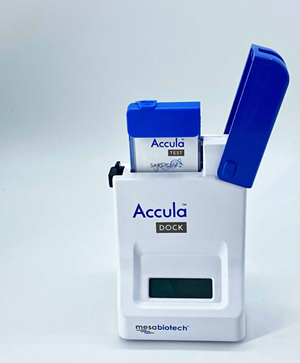 Other RADx-funded companies, such as Talis Biomedical, headquartered in Menlo Park, Calif., aren’t using PCR to amplify SARS-CoV-2 viral material. The Talis One system instead uses LAMP, or loop-mediated isothermal amplification. In a typical LAMP assay, a patient’s nasal or oral swab sample is mixed with enzymes and specially designed DNA fragments, then heated to 65° Celsius to copy the viral RNA to DNA and produce many more DNA copies. With the Talis test, samples are placed in a cassette, popped into a specialized dock, and analyzed in just 30 minutes.

As opposed to an instrument that cycles between hot and cold, LAMP heats the reaction to one temperature. “You could run the reaction in a water bath,” says Nathan Tanner, a molecular biologist at New England Biolabs in Ipswich, Mass.

In general, LAMP-based diagnostic tests aren’t quite as sensitive as ones based on PCR, Tanner says, but could be used to test more people, given their simpler requirements. In one newly described LAMP testing method, a solution changes color in the presence of 100 or more SARS-CoV-2 RNA molecules. The authors, who describe the test August 12 in Science Translational Medicine, propose that the approach, which didn’t detect the lowest viral loads, would be suitable for identifying individuals with a moderate to high viral load.

A third RADx-funded test provides results in a mere 15 minutes. Rather than detecting viral RNA, the test, by Quidel, based in San Diego, detects proteins from virus particles. These viral proteins are also antigens, meaning they stimulate immune responses when they invade our bodies. Such antigen tests are similar to ones used in doctors’ offices and pharmacies to diagnose people with influenza.

Don’t confuse antigen tests with an antibody test that detects antibodies a person develops in response to an infection (SN: 4/28/20) Much like a pregnancy test, COVID-19 antigen tests use antibodies to detect the viral proteins and give a yes or no answer, says Kim Hamad-Schifferli, a bioengineer at the University of Massachusetts Boston.

The Quidel Sofia SARS antigen test has been authorized for emergency use. Like the other RADx-funded rapid tests, it uses a dock and single-use cartridges: Instead of making a line on stick the way a pregnancy test does, the dock detects a fluorescent signal if SARS-CoV-2 proteins are present.

Abbott Laboratories’ test granted emergency use authorization August 26 also is an antigen test and, with its card-based technology, is even simpler. Abbott, based in Abbott Park, Ill., said its test was able to detect 34 of 35 COVID-19-positive patients with symptoms, or 97 percent, in initial studies.

The benefit: An antigen test doesn’t require any specialized lab instruments or enzymes. “It’s all self-contained,” Hamad-Schifferli says. Without a step to amplify viral material, however, an antigen test can be less sensitive than PCR or LAMP and result in a higher rate of false-negative results, up to 20 percent per the FDA’s emergency use authorization guidelines for antigen tests.

That’s because people may produce widely varying amounts of virus, depending on how long has passed since they became infected. In most people, the coronavirus is most abundant from a couple of days after infection to about nine days into the illness (SN: 3/13/20). After that, the immune system kicks in, preventing viruses from being made. On the other hand, viral RNA can be detectable in some people for more than a month.  A negative result from an antigen test has a higher chance of being false comfort, so the FDA says that diagnosis may need to be confirmed with another type of test, like PCR.

A new kind of rapid test

Even though antigen tests typically are not as accurate as standard PCR or the new rapid tests, they could play a crucial role helping to end the pandemic — if their use becomes widespread. As of now, though, even Abbott’s 15-minute test still needs to be ordered by a doctor and performed in a health care setting, so that can provide hurdles to its use. But what if people didn’t even have to leave home to get a test?

That’s what Hamad-Schifferli and her colleagues are working on. The idea is to build a cheaper test that doesn’t involve a dedicated instrument — just a paper strip and a signal detectable by eye. Such a simple test could be used more widely by people at home. “It would be a game changer,” she says.

If COVID-19 tests are deployed widely enough, they could serve as a public health measure to identify people with high levels of SARS-CoV-2 and spreading the virus to others, even if they’re not displaying symptoms. That’s because frequent and fast tests can be used to pinpoint outbreaks as they are happening (SN: 7/1/20).  If cheap enough, these tests could be used by people daily, catching any missed detections through repeated rounds of testing.

The United States is currently testing nearly 700,000 people a day on average, based on data from August 21 through August 27. Michael Mina, however, wants to see even more tests, like “200 million tests … every day in this country.” Surveillance provided by such widespread testing “will effectively do the same thing as a vaccine” in slowing the spread of the coronavirus says Mina, an epidemiologist at the Harvard T.H. Chan School of Public Health in Boston.

But for daily, population-wide testing that could alert people when they first start transmitting the coronavirus to be adopted, a test needs to be cheap enough — for instance, under a dollar — for many people to use them frequently. Abbott said its tests would cost $5. Quidel’s test cartridges cost $23 apiece and the other RADx-funded rapid tests are likely in a similar price range. Given their higher accuracy, those tests could serve a separate purpose: to conclusively determine if an individual is infected and ensure they receive treatment.

The holy grail of tests may be one that is fast, easy, accurate and inexpensive and that could be used broadly — even by people at home. One group of scientists may be among those nearing that goal. The work is led by Abudayyeh, Jonathan Gootenberg and Feng Zhang, all bioengineers at the McGovern Institute for Brain Research at MIT. Zhang is also at the Broad Institute of MIT and Harvard University.

The team developed a test that uses the gene-editing tool CRISPR. All someone has to do is add a sample — either from a nasal swab or saliva — to a tube with a reaction solution, heat the tube to 60° C for an hour in a pot of water, then add a paper test strip to the tube. If two lines appear, that means SARS-CoV-2 RNA is present.

The readout relies on activity of a CRISPR enzyme, Cas12b. If SARS-CoV-2 RNA is present in the reaction, Cas12b cuts what’s called a reporter, a short piece of DNA that’s labeled on both ends. The two halves of the reporter then wick up the paper strip to different places and appear as two lines. If viral RNA isn’t present, the reporter remains intact and wicks up the strip to one place, showing up as one line.

The new test, STOPCovid, is not yet authorized for clinical use, but based on tests in a small number of patients, it identifies SARS-CoV-2 cases as well as PCR tests, the researchers reported May 8 in a preprint posted at medRxiv.org. It returns results in about an hour and would cost under $10, they say.

With the development of so many new technologies to test for the coronavirus, “we’re going to come away from the epidemic with a whole new field of diagnostics,” Mina says.

This story was originally published by Science News, a nonprofit news source.