While the Cincinnati Bell Connector has met or exceeded its ridership goals since starting Sept. 9, it’s lagged on a requirement that passengers wait no more than 15 minutes for a ride. 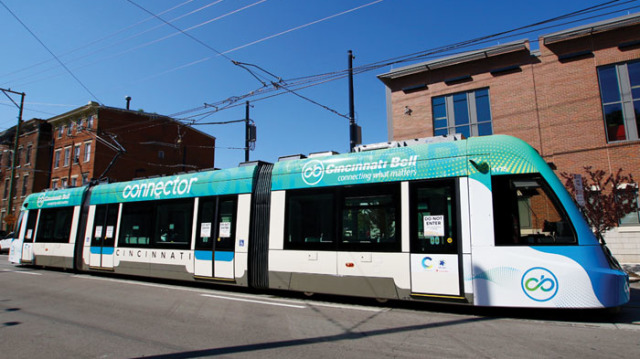 Breaking news: Cincinnati’s streetcar is the subject of a heated back and forth about money and politics. Yes, I’m shocked, too. Cincinnati City Manager Harry Black and the Southwest Ohio Regional Transit Authority have exchanged some slightly testy letters over how fast the transit loop is running through downtown and Over-the-Rhine. Black wants more cars pressed into service during peak hours. But SORTA says that’s going to cost the city. While the Cincinnati Bell Connector has met or exceeded its ridership goals over the past three and a half weeks, it has lagged on a requirement that passengers wait no more than 15 minutes for a ride. Supporters say that’s because there aren’t enough streetcars running. Of the five available, only two run on the weekends, as stipulated by the city’s contract with SORTA. During the four busy weekends the streetcar has been operating, however, the cars have had to pass up waiting riders on at least a few occasions because they’re full.

• Cincinnati City Council’s Human Services, Youth and Arts Committee passed a resolution yesterday that would rename the second Monday in October — Oct. 10 this year — “Indigenous Peoples Day.” The committee heard presentations from the Cincinnati Human Relations Commission’s Ericka King-Betts, Christina Brown and Jheri Nehri. The commission highlighted the history of the idea and other cities that have taken up the gesture, meant to acknowledge and remember the oppression and displacement experienced by native peoples at the hands of European settlers coming to the new world. Nehri said the proposal wasn’t an attempt to “erase history,” but rather to celebrate whole nations of people who existed here before European settlers arrived. Cincinnati City Council must consider and vote on the proposal in its full meeting before a city Indigenous Peoples Day would be official.

• Cincinnati’s Findlay Market is one of five great public places in America, according to a list by the American Planning Association. The organization highlighted Findlay’s 160-year history, its role in historic preservation, its indoor and outdoor vendors and small businesses and its inclusiveness and diversity. As a person who is there multiple times a week, and who missed it dearly when I lived outside Cincinnati, I can say it’s definitely something special.

• Wow. Just down the river in Aurora, Indiana, a parade put on by the local Lions Club has attracted some less-than-ideal attention. A float at last Saturday’s Farmers Fair Parade featured Democratic presidential nominee Hillary Clinton in an electric chair with GOP nominee Donald Trump flipping the power switch. That’s… offensive. But then float maker Frank Linkmeyer went the extra mile, also throwing on an Easter Island-style statue and labeling it President Obama, which is confusing, but also probably pretty offensive. Linkmeyer says the float is just for laughs. Others in the community aren’t amused, though. This quote from Aurora resident Jackie Reynolds sums it up pretty well: “For us to be in 2016 and have our president depicted as an Easter Island statue in blackface… which doesn’t even make any sense… is just as racist as can be.” I’m laughing but I’m really crying.

• There’s plenty of political talking going on today. Mayor John Cranley will give his State of the City address tonight at the 20th Century Theater in Oakley, highlighting his view of the city’s progress over the past year and presumably making big plans for the next. Last year, Cranley unveiled proposals to lift Cincinnatians out of poverty as well as the now-infamous parks levy, which voters roundly rejected. Whatever Cranley proposes this year, expect the talk to be a preview of his re-election campaign. He’s facing off against Cincinnati City Councilwoman Yvette Simpson in a Democratic primary.

• After you finish watching the State of the City, why not go ahead and make tonight  a politics double-header by checking out the Vice Presidential debate? GOP VP contender Mike Pence, who is governor of Indiana, will square off against Democrat Tim Kaine, a U.S. senator from Virginia. Pence looks a little like an aging Michael Scott from The Office, while Kaine is the spitting image of a younger Jerry Gergich from Parks and Recreation. Which is to say they’re both older white guys who probably aren’t much fun to hang out with. Only one is has presided over some pretty scary anti-LGBT legislation, though. (Hint: It’s Pence.) So there’s that. Decision 2016 is upon us.

• Finally, will the revelation that Donald Trump used a loophole for real estate developers in tax laws to pretty much avoid paying federal income taxes after a $1 billion business loss in 1995 hurt him in Ohio? Some people think it could. That could be a boon for presidential opponent Hillary Clinton, who is neck and neck with The Donald here in the Buckeye state. More about that here.