Report on Dubose shooting to be released today; NKY theater to become brewery; 2016 is important because judges are old 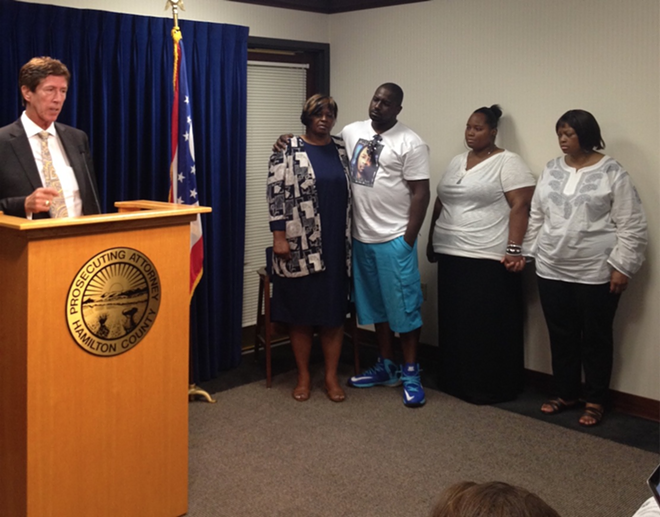 Mark O'Mara, left, speaks at a press conference as the family of Samuel Dubose looks on.

Good morning y’all. Here’s a brief rundown of the news today before you head off for your weekend.

At a news conference this morning, the Cincinnati Fire Department released a report on the March 26 death of FAO Daryl Gordon, the 54-year-old who was killed after falling down an elevator shaft while responding to a fire in Madisonville. That report reveals that other firefighters wrote a warning on the door to that elevator shaft just minutes before Gordon fell. “Do not enter, open shaft,” the black scrawl on the white door reads. Officials with CFD believe thick smoke and dim lighting conditions may have prevented Gordon from seeing the warning. He was in the building about 10 minutes, working to rescue some of the 29 residents who were eventually removed from the structure. Gordon’s death was the first for CFD in seven years. The department plans to use the report released today to review its operating procedures and avoid a similar accident in the future.

• Another important report is coming down the pike today. The University of Cincinnati Police Department will release its initial findings in the investigation into the police shooting death of Samuel DuBose by UC officer Ray Tensing. The shooting happened after Tensing pulled DuBose over for a routine traffic stop. When DuBose refused to exit his car and turned the key in the ignition, Tensing shot him in the head. DuBose’s car then rolled for more than a block. Many, including Hamilton County Prosecutor Joe Deters, have called the shooting inexcusable, but Tensing and his attorneys argue he acted in self defense and felt he would be dragged by the vehicle. Tensing is charged with murder in the incident and will stand trial later this year.

• An historic theater in Northern Kentucky could soon become another area brewery. Bellevue City Council yesterday approved a proposal by Cincinnati-based developer Kent Hardman to convert the 73-year-old Marianne Theater in Bellevue into a unique entertainment venue that just happens to brew beer as well. Hardman wants to retain the theater’s stage and screen to show movies and stage live shows. This kind of setup has seen big success in other parts of the country, including my former home of Austin, which has the Alamo Drafthouse, a theater where you can drink. They also serve great food. If developers find a way to bring chicken wings into the NKY plan, I’ll be there every week.

• The latest GOP polls from the early presidential primary state of Iowa are about what you’d expect on first glance, with some surprising details once you dig in. According to the Quinnipiac University poll released today, Ohio’s guy, Gov. John Kasich, aka K-Dawg, aka Big Queso, (OK I’ll stop now) is in fifth place with 5 percent of the vote. That’s surprising considering Kasich hasn’t really been focusing much on Iowa and because other polls in past months have had him down around 2 percent of the vote. That ascendancy is the good news for him, however. The bad news is he’s in a three-way tie for fifth and he and the rest of the GOP field are being dominated by a real estate Svengali with a bad hairpiece. Yes, Donald Trump is still on top, followed by former doctor Ben Carson. Texas Sen. Ted Cruz and former Florida Gov. Jeb Bush round out the top four. A surprise at the bottom of the list is Wisconsin Gov. Scott Walker, who leads Iowa’s next door neighbors and was at one point the front runner in the GOP’s Random House sweepstakes-style contest for president. What a mess.

• Hey, so check this out. Did the above 2016 rundown give you a headache? Are you daunted by the fact we have well over a year of this garbage we have to pay attention to before the election? Are you ready to throw in the towel?

Well, here’s a brief illustration of why all this stuff matters. As Democrats and Republicans tussle over which of their problematic candidates will fight the other party’s problematic candidate in a gross-out battle of yawn-inducing personal attacks, political back-flipping and the like, multiple perches on the U.S. Supreme Court might be at stake. That’s right. Our judges are aging, with three in their 80s, and the next president may well get to appoint a significant number of replacements as they retire. Given the huge role the nation’s highest court has played in recent issues (see: same-sex marriage, abortion, affordable housing, affirmative action, etc.) and the fact that presidents usually choose a judge who roughly agrees with them ideologically, that’s super-terrifying.

So, you know. Pay attention. Vote. All that good stuff.