Influential Indie Rock band Sebadoh began in 1986 as an outlet for Dinosaur Jr. bassist Lou Barlow, who showed a keen lo-fi, experimental sensibility early on but also proved himself to be a compelling songwriter. After leaving Dinosaur Jr., Sebadoh evolved into one of the best bands of the era, with Barlow’s emotionally honest and effective songs becoming the band’s centerpiece. After reuniting with Dinosaur Jr., Barlow reteamed with longtime co-conspirator Jason Loewenstein and drummer Bob D’Amico to make the first new Sebadoh album in 14 years, Defend Yourself, released in 2013 on the Joyful Noise label. Defend Yourself received mixed reviews, but it’s a great addition to the band’s impossibly strong discography. The band returns to Cincinnati Friday after sneaking into town to play a free show at MOTR Pub last year. 9 p.m. Friday. $12; $15 day of show. Woodward Theater, 1404 Main St., Over-the-Rhine, woodwardtheater.com.

ONSTAGE: CIRQUE MECHANICSThe Cincinnati Pops presents Cirque Mechanics, an innovative show featuring aerialists, trapeze artists and contortionists performing alongside orchestral favorites from composers like Tchaikovsky, Strauss, Copland, Ravel and more. In a press release, conductor John Morris Russell describes it as a mix between Cirque du Soleil and the steampunk scene, with a huge titanium infrastructure placed before the orchestra that serves as the canvas for the entertainment. Additional fire performers, jugglers and magicians will also be at the event. 8 p.m. Friday and Saturday; 2 p.m. Sunday. $25-$99; $10 children. Music Hall, 1241 Elm St., Over-the-Rhine, cincinnatisymphony.org. 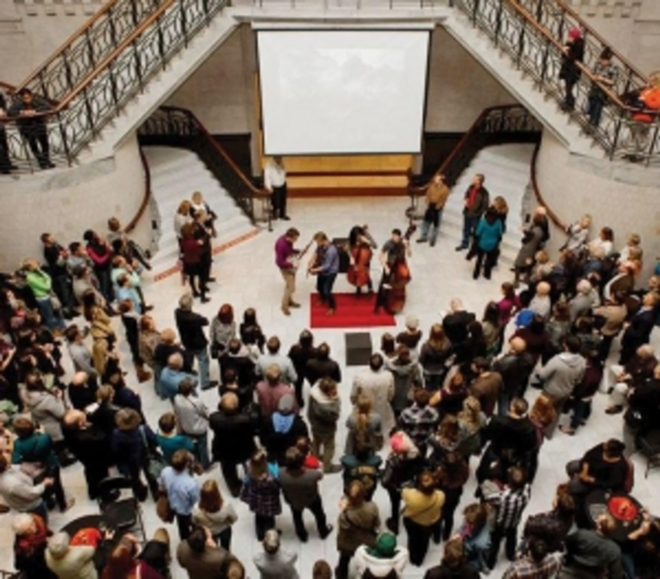 ONSTAGE: PETER AND THE STARCATCHERIn Rick Elice’s loopy script (based on Dave Barry and Ridley Pearson’s novel about Peter Pan’s backstory), wordplay abounds, sometimes blowing by faster than the typhoon that comes upon ships on the way to Rundoon with three orphan boys to be sold into slavery. But this ensemble cast can manage wind speed as they narrate and perform the hilarious show — sometimes individually, sometimes together — but even more so as they race through delirious reinvention of the fairytale. Everything is performed both obviously and imaginatively, from levitating (at the close end of a seesaw plank) to a storm at sea to flying (with just the suggestion of motion, no wires — no “real” taking flight). Amusing costumes, a star field of 200 incandescent light bulbs and buckets of stage magic make it possible. Peter and the Starcatcher continues through April 4. $30-$85. Cincinnati Playhouse in the Park, 962 Mt. Adams Circle, Mount Adams, cincyplay.com.

FILM: ’71 Streets don’t get much meaner than those of Belfast back in 1971 as the British army all but occupied the territory, caught up in what amounted to terroristic street fights between Catholics and Protestants with few truly innocent bystanders in the middle. Everyone took sides, no matter how reluctantly. Gary Hook (Jack O’Connell), an anonymous soldier in the British army, trains hard but is no standout. Hook looks for all intents and purposes like a young Liam Neeson or a baby-faced soldier-boy of few words (think Clint Eastwood) who is simply waiting for the opportunity to prove himself in the theater of battle. And he certainly gets his chance when his unit, under the command of a rather green lieutenant (Sam Reid), receives orders to back up local police in a neighborhood search for weapons. Opens Friday. Read full review here. Over the Moon Vintage Market

MUSIC: ELLIOTT BROOD WITH YOUNG HEIRLOOMS When a band’s sound gets tagged as “Death Country,” you know something special is afoot. And Canadian trio Elliott Brood lives up to its advance billing in every conceivable way. Utilizing guitar, banjo, ukulele, bass pedals, kazoo, harmonica, keyboards, percussion and a sampler in acoustic and electric contexts, Elliott Brood has reimagined rootsy Country, Bluegrass and Folk in a twangy and bracing manner that suggests Old 97’s and legitimately deserves the designation of Canadiana.The trio’s latest triumph is Work and Love, released late last year to rapturous reviews, many of which cited it as the trio’s best album to date. No need to plan a long trip to see Elliott Brood; the best of the Great White North is coming your way. Free. MOTR Pub, 1345 Main St., Over-the-Rhine, motrpub.com.

EVENT: POP-UP CINCY CONCEPT CAMP POP-UP CINCY, a monthly pop-up organization founded by local artist and designer Catherine Richards, invites creative thinkers and makers to participate in the second Concept Camp at an unused storefront in Corryville. Participants will brainstorm with peers from various sectors about effective ways to take their ideas from concept to completion in this one-day event. The space will feature an “idea wall” to pin project outlines and receive feedback from participants, as well as the opportunity to connect with those whose skillsets might help accelerate your plan. Work session: 1-4:30 p.m. (sign-up required); celebration: 5-7 p.m. Free. 3501 Burnet Ave., Corryville, facebook.com/popup.cincy. How to Build a Rain Barrel
Photo: The Civic Garden Center

CLASS: HOW TO BUILD A RAIN BARREL Spring is slowly showing itself as the winter and its accursed snow melt away. As you plan to plant petunias, sunflowers, vegetables and more, consider the task of watering and the best practices to save money, go green and store water for a hot summer so your plants (and your wallet) won’t suffer. The Civic Garden Center hosts a DIY class on how to build and use your own rain barrel to collect free rain water to use for the garden. 1:30-3 p.m. Saturday. $10; free for Civic Garden Center volunteers. 2715 Reading Road, Avondale, civicgardencenter.org.

COMEDY: DC BENNY Like his peers Jimmy Shubert and Rocky LaPorte, D.C. Benny is a talented veteran comic who received a nice boost by competing on last season’s Last Comic Standing. Well-known in the New York and L.A. comedy scenes, Benny has also written and performed extensively for various TV projects. He also functions as the producer and head writer for Jim Breuer Unleashed on Sirius/XM satellite radio. On stage he mixes jokes with storytelling, peppering them with several original characters. Showtimes Thursday-Sunday. $15-$17. Funny Bone on the Levee, Newport on the Levee, Newport, Ky., funnyboneonthelevee.com.

ONSTAGE: DETROIT ’67 Detroit ’67, making its regional premiere at Ensemble Theatre Cincinnati this month, is not something to smile about — but it might be possible to feel good about the “tryin’,” even though 48 years later the backdrop of this story feels eerily familiar, perhaps leading us to ask if America will ever rise above such racially driven conflicts. The details behind the story of Chelle (Zina Camblin) and Lank (Bryant Bentley), a sister and brother hoping to build a secure future, are this: In late July 1967, more than 10,000 citizens of Detroit rioted. Police had raided a blind pig — an unauthorized after-hours hangout very much like the one Chelle and Lank have established in their family’s basement — where more than 80 patrons, all African-American, had gathered to celebrate the return of a Vietnam veteran. Detroit '67 continues through April 5. $18-$44. Ensemble Theatre Cincinnati, 1127 Vine St., Over-the-Rhine, ensemblecincinnati.org.

FILM: MOON DUST Detroit-based painter Scott Reeder’s new Moon Dust is a sci-fi feature film with a one-and-a-half-hour running time. Moon Dust is about the denizens of a run-down tourist resort on the moon (called Moon World) who struggle to maintain enthusiasm at a time when the hip, wealthier travelers have all gone to Mars. With its deadpan tone, frequently improvised dialogue from non-professional actors (including Reeder, himself) and eccentric production design featuring color-saturated, patterned or monochromatic sets and oddball costumes and hairstyles, it very much is the work of a visual artist.  2 p.m. Sunday. Free. Cincinnati Art Museum’s Mary R. Schiff Library & Archives, 953 Eden Park Drive, Mount Adams, cincinnatiartmuseum.org.

CHARITY: CINCINNATI GORILLA RUN This Sunday don’t be surprised to find downtown resembling a scene from Planet of the Apes. Hundreds of runners dressed as our endangered primate relatives will be participating in the Cincinnati Gorilla Run 5K presented by The Gorilla Glue Company, which aims to raise money for the Mountain Gorilla Conservation Fund. Gorillas found in the African mountains are close to extinction, and the Mountain Gorilla Conservation Fund is working to expand the program’s wildlife health and research center in Uganda. Registration closes at 5 p.m. March 28. Race opens at 9 a.m.; run starts at 11 a.m. $99.95 first-time gorillas; $40 and up for returning gorillas; $15 kid gorillas. Montgomery Inn Boathouse, 925 Riverside Drive, East End, cincinnatigorillarun.com. ATTRACTIONS: MUMMIES OF THE WORLD The Cincinnati Museum Center’s new once-in-a-lifetime exhibit, featuring real mummies and artifacts, some dating back as far as 4,500 years, is in its final weeks. Discover how mummies are created, where they come from and who they are in an immersive, multi-media display. Through April 26. Non-member exhibition-only tickets: $19.50, $17.50 senior, $12.50 child. Cincinnati Museum Center, 1301 Western Ave., Queensgate, mummies.cincymuseum.org.

See more stuff to do here.