RNC Day Three: Everyone is arguing with everyone and it is fascinating

No bodies of water have caught fire yet. Trump’s hair has yet to leap off his head and devour any errant delegates whole. All in all, I think we’ve done OK here. So, what happened yesterday? 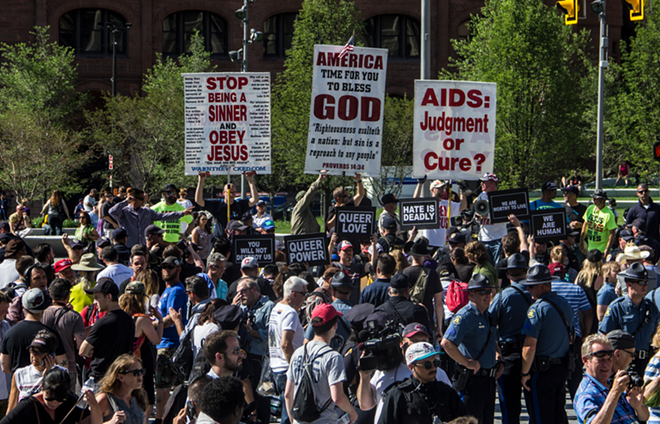 Welcome one and all! We’ve made it almost to the end of the Republican National Convention, and that in and of itself is an accomplishment. Congratulations. Just one more day and we can all go back to pretending like the world as we know it isn’t ending, and Cleveland can go back to doing whatever Cleveland does when it’s not winning NBA championships or hosting tens of thousands of conservatives. No bodies of water have caught fire yet. Trump’s hair has yet to leap off his head and devour any errant delegates whole.

All in all, I think we’ve done OK here. So, what happened yesterday?

• Anti-Trump protests reached a new fervor, both in intensity and proximity to the RNC itself as demonstrators staged protests right outside the convention venue. In the morning, dozens of immigration advocates with groups called the Ruckus Society and Mijente literally walled off the Quicken Loans Arena, holding up a very long banner in front of the venue’s entrance reading “Wall Off Trump” and “No Mas Trump.” (That’s Spanish for “no more Trump,” in case you didn’t know). The protest started at Public Square before moving a few blocks to the area around the arena’s entrance. It went on for about an hour before dozens of police showed up.

• But wait, there’s more. In the afternoon, a group calling themselves the Revolutionary Communists burnt an American flag outside the arena, leading to 17 arrests, including two for felony assault of police officers. The group claims the arrests were overly violent and unnecessary, since a lawsuit filed by the ACLU forced the city of Cleveland to allow constitutionally protected protests throughout the city. The person burning the flag was none other than Gregory Lee Johnson, who in 1984 burned a flag at the RNC in Dallas. His subsequent arrest led to the historic U.S. Supreme Court case Texas vs. Johnson, which upheld flag burning as constitutionally protected speech. Police say protesters caught themselves on fire and that the kerfuffle arose from that. The protesters disagree, and some legal observers have also cried foul. The Ohio chapter of the National Lawyer’s Guild, which represents protesters, said it was “highly concerned” about the arrests.

The ensuing chaos — officers scrambling to put the flag out, communist group members trying to block them, flying limbs and the like — inspired police to bring in mounted patrols and a large number of bike cops. For tense moments, the proceedings outside the arena took on a real air of urgency for the first time at the RNC. Or maybe I just had to use the restroom and was blocked in between some elbow-happy national media people, who were kind of jerks about the whole thing really.

• The rest of the day was more or less about small skirmishes in America’s ongoing culture wars. The Revolutionary Communists marched around Public Square for their members who had been arrested at the flag burning, chased briefly by a group of Libertarians wearing “socialism sucks” shirts. (Soundtrack here.) Trump supporters argued with anarchists. I saw a group of Christian fundamentalists argue with supporters of Gary Johnson, the Libertarian Party’s candidate for president. At the peak of the exchange, a fundamentalist told a female Johnsonite that her “skirt could really provoke a man. Modest is the hottest.” A wild-eyed Johnson supporter rebutted, “your mom really provoked me last night,” and the fundamentalists walked away, knowing they had been bested. Well-reasoned discourse, eh?

• Elsewhere, young conservatives were branching out, experimenting. Have you heard about this? It’s called the alt-right, and you can kind of think of it as your scary hipster-brand version of the Tea Party. You’ve got gay folks who are conservative and Islamophobic. You’ve got your out and out white supremacists, some of whom love to open carry. You’ve got some of your younger, more fashion-forward militia peeps. Alt right icon, Breitbart editor and recently banned Twitter user Milo Yiannopoulos and other young conservative… err… stars? I guess? made appearances at Wake Up, the “most fab party at the RNC.” Basically, the idea was to recruit LGBT folks to the right based on post-Orlando shooting fear around Muslims and immigrants, despite the fact the Orlando shooter was born in the United States and was a closeted gay man himself.

On a side note, several Trump supporters I talked to today shared the same little nugget of alt-right wisdom: They like Trump because he’s a “pro-American nationalist.” So when someone tells you that nationalism is on the rise, believe that.

• As reported yesterday, Indiana Gov. Mike Pence is Trump's official running mate. But did Ohio Gov. John Kasich have a legit shot? Did Trump offer him the opportunity to control both foreign and domestic policy as VP? Wait, that sounds crazy. But that's what The New York Times says happened.

• The convention itself seems to have become something of an endurance sport. For the third night in a row, delegates and attendees put on their American flag finery, sidled up to the Republican Roadhouse and GOP Bistro (yes, those are the real names of the concession stands inside Quicken) for some chicken fingers, and sat through 20 or so speakers from America’s political junior varsity team, various television shows or Donald Trump’s immediate family. Last night’s lineup was no exception to this rule.

Country star Chris Jansen sang a song about being rich and owning a boat. “Well, I ain’t rich, but I damn sure wanna be,” the song, called “Buy Me a Boat” went. Jansen fantasized about getting all the money that “could buy me a boat, buy me a truck.” Jansen also did a ripping cover of Johnny Cash’s “Ring of Fire,” which is about adultery, because why not?

Florida Governor Rick Scott managed to talk about the Orlando shooting without mentioning the LGBT community at all, only hammering home the dangers of ISIS.

“I’m old enough to remember when terrorism was something that only happened in foreign countries,” Scott said. “Not today.”

Conservative author Laura Ingraham riffed on the flag burning incident earlier in the day before laying into Hillary Clinton. She also listed a number of things that are great about America and ended by shouting, “it’s where our dead are buried!” which is an odd crescendo, to be honest.

The man a few seats over from me fell asleep several times, and for the most part people seemed less than animated in the mostly empty rafters. It went on and on like that.

• But then, something amazing happened, and U.S. Sen. Ted Cruz did something most would have thought impossible: He made Ted Cruz look noble, inspiring, even. Cruz gave a speech in which he refused to endorse Donald Trump. Now, some folks think Ted “Oops I Shut Down the Government” Cruz is a sociopath, but it was hard not to want to root for him, especially after tons of Trump delegates booed him and began chanting for him to endorse their guy. Instead, Cruz told voters to “vote their conscience,” a phrase borrowed from Never Trumpers. Bold.

After that, headliner, VP nominee and Indiana Gov. Mike Pence had a tall order in topping all that excitement. He did it by looking like Michael Scott from hit TV show The Office if actor Steve Carrell had aged 20 years, and by… you guessed it… lighting into Hillary Clinton.