"The looting and criminal damaging we saw last night, particularly to our county campus, will not be tolerated. Let me remind everyone we do have room in our jail for you," said Sheriff Jim Neil 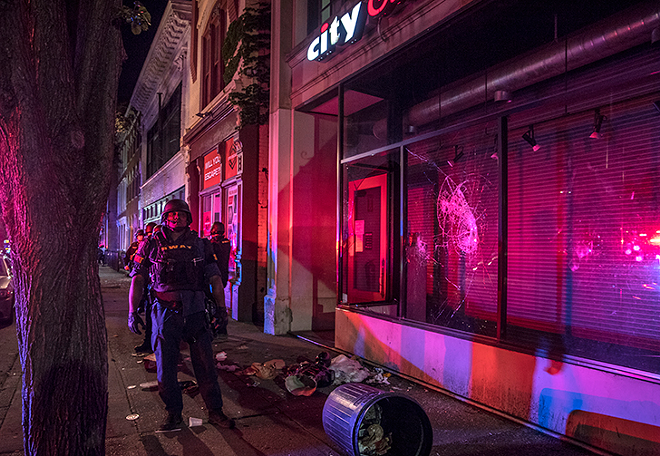 In a press briefing this morning, Mayor John Cranley addressed the property damage and theft that happened during last night's demonstrations after stating: "The biggest and most important issue facing the country today, and our city as a result, is the murder of George Floyd and it has obviously, understandably, created a great deal of anger and righteous indignation about life in this country."

He said that hundreds of people gathered yesterday to peacefully express their anger and frustration over the death of Floyd, and that there were no issues until about 11:30 p.m. when a small group of people started breaking windows and stealing items from businesses who were already struggling to recover from the impact of the coronavirus shut-downs.

"Let me state unequivocally that the people who engaged in criminal behavior last night were not part of the protest," Cranley said. "There is and has always been in these episodes throughout American history a conflation between people who are exercising their First Amendment right to protest and to free speech and people who take advantage and exploit that opportunity to engage in criminal behavior. They are not the same thing. They are not the same people."

Some reports suggest around 50 businesses were damaged across downtown and Over-the-Rhine, including those he listed, like BlaCk Coffee, Cappel's and MiCA 12/v.

"It is completely unfair to target someone like BlaCk Coffee or Cappel's or MiCA," he said.

Eleven people were arrested last night for charges ranging from burglary to breaking and entering to disorderly conduct and more. Cranley said there will be more arrests coming based on video evidence and he expects more arrests tonight.

Hamilton County Sheriff Jim Neil didn't mince words in a Facebook statement, saying, there's room at the jail for anyone who wants to loot or damage.

"We wholeheartedly condemn the actions of the Minneapolis police officer, who was fired and arrested. We also recognize the constitutional right of all Americans to assemble in peaceful protest and be heard. However, the looting and criminal damaging we saw last night, particularly to our county campus, will not be tolerated. Let me remind everyone we do have room in our jail for you," he said.

Part of the reason for that "room" might be some recent releases to cut down the Hamilton County Justice Center population in light of the coronavirus pandemic.

In April we reported there were 803 people in county jail, down from 1,200 in March. The reduction is a way to diminish the possibility that COVID-19 will spread among the jail's population. That month, two deputies who work at the jail tested positive for COVID and exposed inmates were placed in quarantine.

In recent years, the jail has been plagued with overcrowding issues. According to media reports, the jail's population got as high as 1,600 inmates in 2017 — a level that has shown up in reports recently as well. The facility has 847 cells.

Prior to COVID-19, local legislators were also look for ways to reform how the county jails people and modify how the city approaches practices like cash bail.

Support local journalism and our small but mighty team. Please consider making a one time or monthly donation to help support our staff. Every little bit helps.