One Hundred Years Ago Today, the Cincinnati Reds Won Their First World Series

There is a catch, however. The Reds beat a Chicago White Sox team whose key players were accused of participating in a plot to fix the series. 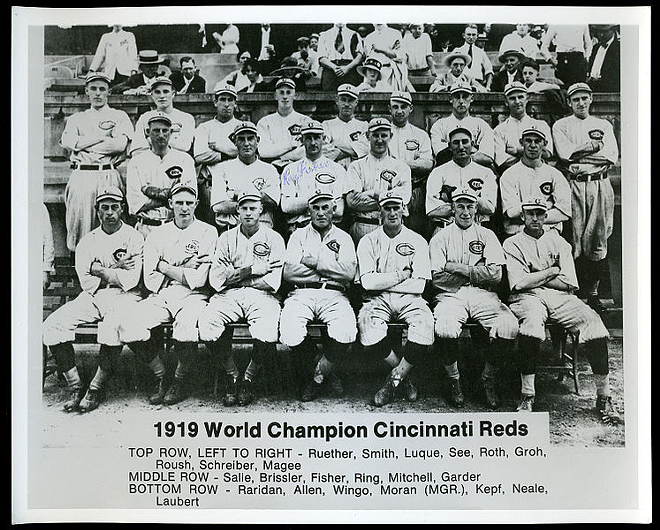 Being a sports fan in Cincinnati is... kind of brutal these days. So we can be forgiven for looking back wistfully at former glories.

And those glories don't get much bigger than when, 100 years ago, our Cincinnati Reds, the first professional team in baseball, won its first World Series.

The Reds beat the Chicago White Sox on Oct. 9, 1919 in the eighth game of an unusual best-of-nine series to take their first championship. It was a series full of surprises — and scandal.

At the time, the Reds were a bit of a Cinderella team, having spent the previous two decades never rising higher than third place in the National League. But a new manager, former Philadelphia Phillies skipper Pat Moran, led the team to a dominating season that put them nine games ahead of the second-place New York Giants. That performance was fueled by centerfielder Edd Roush's league-leading .321 batting average and a rock-solid pitching staff.

As good as the Reds were, the Sox were heavy favorites in the series, having finished first in the American League themselves on the strength of star player Shoeless Joe Jackson's .351 batting average and one of the league's best pitchers, Eddie Cicotte.

But the Reds' win came with a rather enormous asterisk — the fact that eight White Sox players, including Jackson and Cicotte, were implicated in an attempt by gamblers to fix the series later called the "Black Sox Scandal." Jackson, Cicotte and six other White Sox, including supposed fix mastermind first baseman Arnold "Chick" Gandil, were banned from organized baseball for life for their admitted involvement in the plot, though they were acquitted on criminal charges.

Involved players, allegedly spurred on by the supposed cheapness of Sox owner Charles Comiskey, were promised by a gambling syndicate between $5,000 and $35,000 to throw games. Already by the first game in the series, some were raising suspicion about a possible fix. Cicotte, usually a dependable pitcher, gave up five runs while the two teams were tied in the fourth inning, including a triple to the Reds' pitcher. That and other mysterious bungles gave the Reds a commanding 9-1 victory in the series opener at Redland Field (the eventual Crosley Field) in the West End.

Questions about the legitimacy of the Reds' win aside, it was a hard-fought eight-game series. The Reds beat the Sox in the next game at Redland Field 4-2. They dropped the third game 3-0 at Comiskey Park in Chicago before winning the next two games there 2-0 and 5-0. The sixth game, back at Redland Field, was the closest — the Sox eked out a 5-4 victory after a 10-inning nail biter. They visiting Sox took that momentum into the series' seventh game at Redland, winning a decisive 4-1 victory.

At that point, the Sox were still trailing the Reds by a game in the series but had the opportunity to tie it up on their home turf in Comiskey Park. By this point, Gandil would later claim the players had abandoned the plot to fix the series over concerns they would be caught and because some had yet to be paid as promised. But rumors at the time suggest the gambling syndicate behind the fix, shaken by the recent White Sox wins, threatened Sox starting pitcher Claude "Lefty" Williams if he did not throw the game.

Whether that's the case or not, the Sox took a drubbing in front of almost 33,000 hometown fans during the eighth game. The Reds scored five runs in the first two innings and just kept pounding, ending up with a 10-5 win to close out the series.

Ironically, the series' only home run came from Jackson of the Sox during that game. Jackson would also notch 12 hits during the eight games — a World Series record at the time — and rack up a .375 batting average.

It still isn't entirely clear how much of the Reds' victory came as a result of the plot to fix the World Series. Even with suspicious, idiosyncratic performances from some of the Sox's key players, the Reds' record that year shows they were a team to be reckoned with and many players turned in great games throughout the series.

Despite the team's strengths, however, it was back to third place in the National League in 1920 as another Ohio team — the American League's Cleveland Indians — took the World Series that year. Ouch.

The Reds wouldn't win another World Series for two decades. After a victory in 1940, the team again lapsed 35 years before taking two championships back-to-back in 1975 and 1976, the culminating accomplishments of the Big Red Machine era. The Reds last won the World Series in 1990 — meaning we're probably due for another right about now.