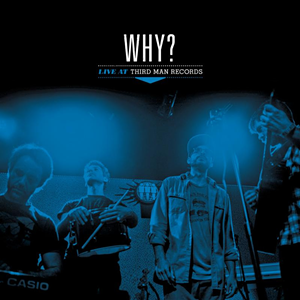 On May 3, 2017, just a couple of months after the release of their first album in five years, Moh Lhean, Cincinnati's Yoni Wolf and his Avant Pop group WHY? recorded a session at the studio at Jack White's Third Man complex in Nashville. Today, a recording culled from those sessions (in the studio's "famed Blue Room") was released by Third Man Records.

WHY? Live At Third Man Records' tracklisting is a WHY? retrospective, featuring tracks from the group's albums like Moh Lhean, Eskimo Snow, Mumps, Etc. and Alopecia. The band is currently playing Alopecia in full on tour in honor of the LP's 10th anniversary. WHY? plays Utah tonight, with sold-out shows in San Franciso and L.A. coming up next week. The Alopecia tour continues into 2019.

White has been a fan of Wolf's for a while. In 2014, he covered "Dead Dogs Two," a song by Wolf's cLOUDDEAD project with a couple of other Cincinnatians — Doseone and Odd Nosdam. The three musicians were among the founders of the Hip Hop label Anticon when they lived in the Bay Area; White played the song during a concert in San Francisco.

WHY?'s new Third Man release is available on 12-inch vinyl here. It's also available on most major digital/streaming services, including Spotify (listen/link below).