Dallas Frazier was sentenced today for punching a protester outside an Aug. 9 rally for President Donald Trump in Cincinnati 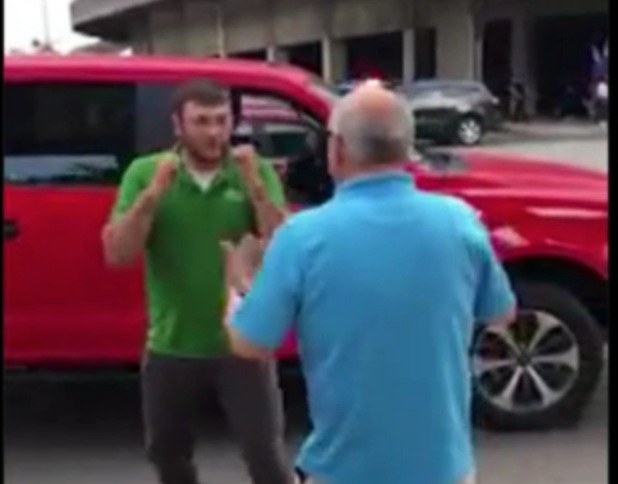 A Kentucky man will spend four months in jail for his role in an altercation outside a rally for President Donald Trump in Cincinnati last summer.

Frazier today was sentenced to 120 days in jail and ordered to pay restitution for the incident.

Frazier, then 29, jumped out of a red pickup truck just north of U.S. Bank Arena (which has since been renamed the Heritage Bank Center) and punched 61-year-old Alter of Hyde Park, breaking Alter's glasses and leaving visible wounds on his face. Frazier was almost immediately arrested after the incident.

Frazier, who says he was not attending the rally, admitted to punching Alter, but claimed that Alter made statements and gestures that provoked the fight. Frazier and defense attorney Sam Heller argued that Alter took of his baseball cap, raised his hand and motioned Frazier to come at him, then said, "Come on."

Alter has said Frazier was yelling at him and other anti-Trump protesters, and that his own actions and words were not meant to start a fight with Frazier, but rather to express exasperation.

"They pulled up and were yelling at everybody, whatever," Alter told CityBeat immediately after the incident. "So I was just like, 'Come on, buddy,' and he jumped out and started swinging."

Scott Fantozzi, a bystander, caught the incident on video. Fantozzi says he saw protesters exchange words with the passenger of the truck about political matters, but did not believe the anti-Trump group was provoking violence.

In a call placed from jail after the incident and played for the jury in Hamilton County Court, Frazier expressed no remorse for the incident.

"I wish I would have dropped his ass like a sack of flour," Frazier said in that call, according to multiple media reports. "I would have looked a lot cooler. At least I only hit one dude. He'll have to go to the hospital every time he sneezes to get his eye put back in."