Brothers Paul and Neil Barraco — chef and management from Milford's 20 Brix and Padrino, respectively — opened this East Coast-style diner at the end of January 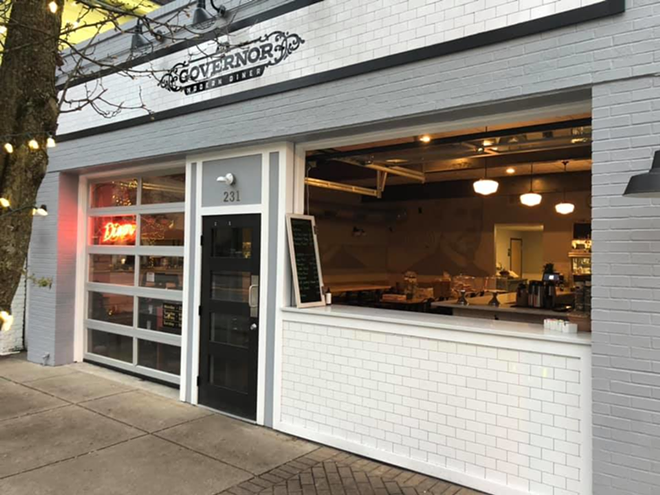 Brothers Paul and Neil Barraco had been working in fine dining for years when they returned to their East Coast roots to open a classic diner with a modern twist in downtown Milford.

With Paul, who has served as executive chef a Milford's 20 Brix for more than a decade, and Neil, specializing in front of house management at its sister restaurant Padrino, the Barracos are a dream team… now that they’ve learned how to work together as business partners instead of bicker as brothers.

The mission of the Governor is to offer the perks of fine dining — locally procured meat and produce, a menu made from scratch, a carefully designed cocktail list — at a medium price point in a laid-back environment.

The Barraco brothers opted to open the Governor in Milford as opposed to battling it out with the restaurants that seem to be regularly opening up in Over-the-Rhine.

“Maybe if we make something great, people won’t always go to OTR — maybe they’ll drive out here once in a while,” says Paul.

“I’ve seen a massive change (in Milford) over the past couple years,” he says. “We have a brewery down there now that kills it, we're getting this amazing distillery coming in soon, we have a bike trail which brings a lot of adventure-seeking clientele.”

The menu at the Governor features cuisine ranging from Asian to Italian to classic Americana. There's a Krab Rangoon "fromelette" with krab mix, scallion cream cheese and apricot chili sauce for breakfast; a housemade pastrami sandwich for lunch; and chicken and meatball soup with pecorino cheese for anytime.

“The cool thing about diners, especially East Coast-style, is that they tend to be more of a melting pot of a restaurant than you would think,” Paul says. “I like so many different types of cuisines, I thought if we could take all of these flavor elements and mix them into something very recognizable, we could help less-open eaters try new things and realize (these cuisines) aren’t scary.”

Every dish, be it pancakes or a cheeseburger, is available all day long — classic diner style.

“There’s so many times when I wake up in the morning and I don’t want a coffee, I want a burger,” Paul says.

One would think that a new local restaurant would have suffered amid the COVID-19 craziness, but Paul says that the Governor has been lucky.

Opening in January of this year, a time when most restaurants are at their slowest, Paul says the Governor “absolutely killed it” because of the buzz around town leading up to opening.

Paul believes that the restaurant’s garage-style walk-up window and their location in Milford’s “Designated Outdoor Refreshment Area” — meaning open-container is permitted — is what helped the Governor thrive through the pandemic.

The Governor served a limited menu during the carry-out only period, with dishes chosen for the menu that traveled well so that customers could best enjoy the food from the comfort of their homes. They also offered family-style dinner specials to feed groups, ranging from San Diego-style chimichangas to pasta arrabiata and a smoked lamb French dip.

“We actually had our best business day ever during COVID,” Paul says, “but if we need to work 20 hours a day to make this happen, we’re willing to do it.”

The Governor plans to reopen for in-house seating on Monday, June 1, and the team is taking extra precautions to make sure they “do it right,” including adding partitions, using high-end antiseptic cleaners and ensuring that the full staff is well-trained on the new procedures.

Paul says they have maximized their limited space as well as they can, making room to safely serve around 60-percent of their original capacity.

Their new seasonal menu is rolling out Monday. Or you can always grab their signature Governor Tso’s chicken sandwich and a boozy slushie made with their Big Red soda-infused simple syrup.