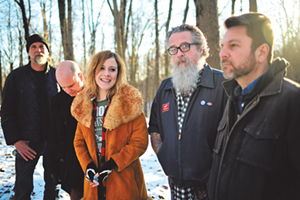 One of Cincinnati’s most widely acclaimed bands, Wussy, is gearing up for the international release of its much-anticipated new album What Heaven is Like. Hometown fans will get first crack at hearing the full-length when the group performs this Saturday at Woodward Theater. The show will feature two sets — one of the new album in full (the only time the band is slated to do so) and one featuring songs culled from throughout Wussy's fantastic discography.

It’s the band’s last show before Heaven’s official release on May 18, as well as their final domestic gig before the quintet's overseas tour, which kicks off May 24 in Manchester, England and includes dates throughout the U.K. and Germany (plus a concert in Amsterdam in between). The band’s U.S. summer tour starts in July and includes several East Coast dates.

In the lead-up to What Heaven is Like’s release (on locally-based Shake It Records in the States and through Damnably Records — label home to records by Shonen Knife, Cincinnati’s Leggy and South Korean buzz-band Say Sue Me  — overseas), three tracks have been premiered through a trio of high-profile music outlets, helping build the anticipation.

After a late February album announcement and debut of the track “Gloria” on Stereogum, at the end of March, Vice/Noisey premiered “Aliens in Our Midst,” Wussy’s cover of a 1979 track by obscure left-field Garage band The Twinkeyz (the band’s Chuck Cleaver told Noisey he first discovered the song around the time of its release while working at a Cincinnati record store).

This week, the second track on What Heaven is Like, “Cake,” debuted on Billboard magazine’s website. The premiere was accompanied by a feature story by veteran music journalist and Cincinnati native/resident Gil Kaufman. In the interview, Cleaver and fellow frontperson Lisa Walker talk about some of the things that inspired the album (like the comic book series Black Hole, the movie/TV series Fargo and feelings of fear and hope in Trump’s America), while also addressing whether a line in the album’s final track is a hint that the end is near for Wussy. Regarding the “It’s the last time around” lyric, both singer/songwriters seem to confess to a little trolling: “You know, you fuck with people’s heads,” Cleaver says.

Listen to the three publicly available tracks from What Heaven Is Like below.

You can pre-order the vinyl and CD versions of What Heaven Is Like here.

Tickets for Saturday’s album release show are currently still available here. It’s highly recommended that you buy tickets in advance rather than wait until the day of the show; it’s a safe bet this one will be a sell-out.

In other Wussy release news, the band's limited-edition 7-inch Record Store Day EP of covers has been made available digitally (here). The Getting Better EP features versions of songs by three Ohio artists (Cincinnati’s Afghan Whigs and Seedy Seeds and Columbus’ Jenny Mae), plus the title track, a tripped-out take on a song by another obscure Garage band, this one from the ’60s (listen below).