A massive march swept through downtown and Over-the-Rhine on Saturday following the announcement of Ray Tensing’s mistrial, coinciding and joining with another large rally protesting president-elect Donald Trump.

Cincinnati has been holding its breath as it waits to find out the fate of Ray Tensing, the University of Cincinnati police officer indicted on murder and manslaughter charges for shooting black unarmed motorist Sam DuBose last year. After a jury deadlocked Saturday, the city will have to wait still longer to learn if Tensing will face punishment for DuBose's death.

As protesters came and went from the courthouse leading up to the announcement, DuBose’s family, including his daughters, underwent a difficult roller coaster ride that culminated when the jury couldn’t come to a verdict.

“There are a lot of people in that room who are apparently blind to justice,” DuBose’s fiancé DaShonda Reid said outside the courtroom the day before. “We shouldn’t be out here this long.”

DuBose’s 17-year-old daughter Teaila Williamston often joined activists outside the courthouse, chanting “no justice, no peace, no racist police” into a bullhorn or comforting others in the family. When the mistrial was announced, she took to the streets with hundreds of other protesters, quietly marching with a determined, but distant, look in her eye.

Hamilton County Judge Megan Shanahan officially declared a mistrial around 10 a.m. the day after the jury submitted a note to her saying it could not reach a verdict. After five days of testimony and about 25 hours of deliberating, eight jurors wanted Tensing convicted on manslaughter charges for the July 19, 2015 shooting death of DuBose in Mount Auburn, Hamilton County Prosecutor Joe Deters says. Three of those jurors originally wanted a murder conviction.

Tensing's jury was made up of six white men, four white women and two black women. Two jurors wept in court as Shanahan announced the deadlock.

Now, Deters must decide whether his office will ask for a retrial. The prosecutor has stressed he still thinks Tensing murdered DuBose, but says his office must assess the options going forward. Those include trying Tensing again on the same charges, seeking lesser charges, or dropping the case.

“I'm going to go through a process where we analyze whether or not there's a probability of success at trial,” he said after Shanahan read the announcement. “If I think we can get a win, we'll retry the case.”

Nick Swartsell
Demonstrators leave the Hamilton County courthouse on a march protesting a jury's failure to reach a verdict in the Ray Tensing trial.

Deters argued that Tensing's life was not in danger when he shot DuBose in the head during a routine traffic stop in Mount Auburn last year. Tensing and his attorney, Stew Mathews, say he was being dragged at the time he fired and thought he would be killed. The prosecution called on an expert video analyst who, using footage from Tensing's body camera, showed that DuBose's car was stationery a split-second before Tensing fired and that the officer's arm was not tangled in the car's steering wheel, as Tensing has claimed.

But Tensing says he feared for his life.

"I was thinking, 'Oh my gosh, I'm being dragged by this guy's car,' " Tensing said in a videotaped statement made after the shooting.

Mathews introduced his own police use of force expert witness who testified that he believed Tensing was justified in shooting DuBose.

There were some unexpected moments during testimony in the trial, including the revelation that Tensing was wearing a T-shirt from the Great Smoky Mountains with the Confederate flag on it, a symbol generally associated with white pride and slavery.

As Deters considers the costs of a trial and its likelihood of success, Cincinnati Black Lives Matter and other activist groups have promised to continue protests until Tensing is convicted. Some of those will take place outside the prosecutor's downtown offices. 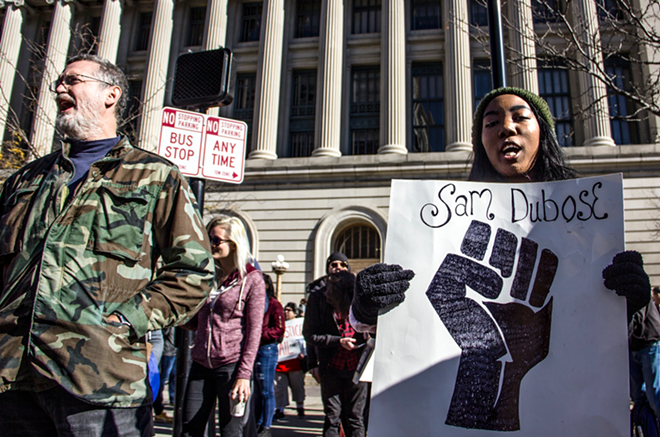 The mood outside the Hamilton County courthouse had been tense for days leading up to the mistrial announcement. As the jurors deliberated inside on Tensing’s guilt or innocence, protesters came and went.

Members of Black Lives Matter, The Greater Cincinnati Coalition for the Homeless, Over-the-Rhine’s Peaslee Neighborhood Center, faith-based group the Amos Project and others took turns holding signs and leading chants. Bigger crowds congregated at times, drawn by word that something was happening inside the courtroom that could mean a verdict soon, general outrage over the shooting or just curiosity about one of the biggest court cases in Hamilton County history.

Hamilton County Sheriff's deputies posted up near the courthouse doors and a few dozen officers from the Cincinnati Police Department sometimes circled on bicycles. Politicians, reporters, attorneys and several members of DuBose’s family, including his daughters, came and went. As the days went on, tension gathered.

On Friday, crowds lingered after the jury had been sequestered for the day. The mood got tense at times. A young man paced back and forth, swinging his arms and berating the crowd, calling for action instead of “just talk.” Greater Cincinnati Homeless Coalition Director Josh Spring gave him a bullhorn to air his frustrations, and he calmed somewhat.

Later, Black Lives Matter activists powered speakers with a generator, played Kendrick Lamar’s “Alright” and Public Enemy’s “Fight the Power” and led the crowd in a chant based on the words of Black Panther Assata Shakur before everyone dispersed.

The next day, the news came down: There would be no guilty verdict for Tensing, at least not yet.

The mistrial set off consternation from advocates for the DuBose family and anger from protesters outside.

“With the video evidence as clear as it is, they shouldn't have been so stuck,” said DuBose family attorney Al Gerhardstein, a noted civil rights attorney who helped craft Cincinnati’s 2001 Collaborative Agreement after the police shooting death of unarmed black 19-year-old Timothy Thomas.

Faith leaders also decried the results of the trial.

“My heart is broken for the DuBose family and what this means for my community,” said Amos Project organizer Elizabeth Hopkins after the mistrial had been announced. She read a passage from the book of Jeremiah. “You have treated the wounds of my people carelessly. You cry, ‘peace, peace.’ But there is no peace. The church will no longer cry for peace when there is no peace.”

About three hours after the announcement, hundreds struck out from the courthouse steps, where they had begun spilling onto Main Street and proceeded down Court Street, where anti-Trump marchers merged with the group. More than 1,000 streamed down Walnut Street to Fountain Square, up Vine Street, past City Hall and then through Over-the-Rhine, trading chants of "When I say 'Tensing,' you say 'guilty," back and forth with "Fuck Trump" cries.

Nick Swartsell
Protesters in Washington Park following a march through downtown and Over-the-Rhine. Racial justice activists decrying a mistrial in the Ray Tensing case and anti-Trump demonstrators joined together for the march.

The march ended at Washington Park after passing by the spot where CPD officer Roach shot and killed Thomas, setting off days of unrest in OTR.

There was little violence this time. One person was arrested for breaking glass downtown, and CPD officers blocked off Ninth Street past City Hall to prohibit access to I-75, which marchers had shut down during a previous protest in 2014. 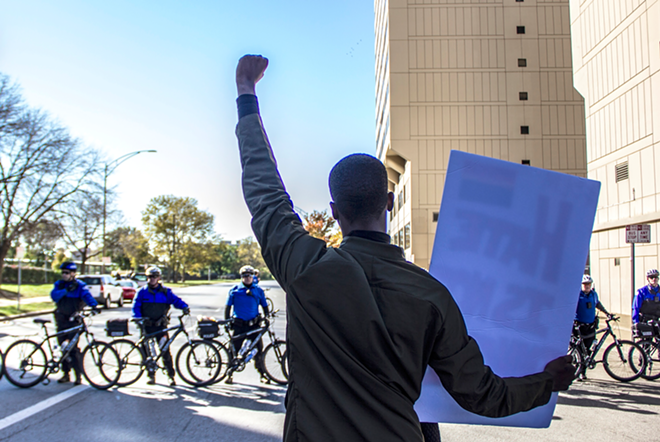 Nick Swartsell
A demonstrator squares off with police on Ninth Street during a march protesting a mistrial in the Ray Tensing case.

During a brief confrontation between police and protesters at that blockade, CPD Specialist Scotty Johnson told a group he thought Tensing should “be in a penitentiary.”

Many city officials were also frustrated with the trial's outcome. Councilwoman and mayoral candidate Yvette Simpson spoke briefly to the crowd at the courthouse, urging peace and calm, and then marched with protesters. She called for Deters to retry Tensing, saying his trial is “one of the most important” the county will see. 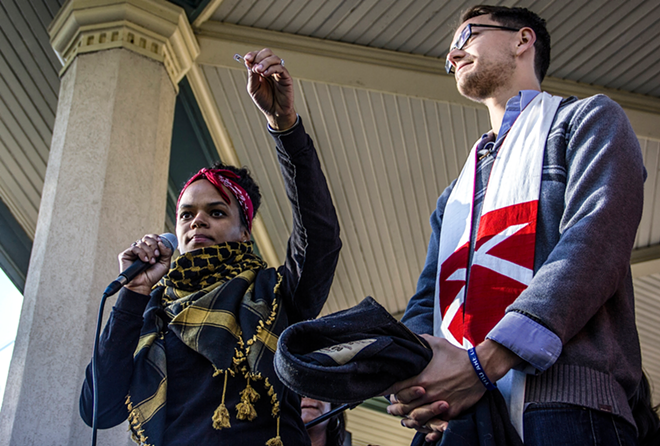 Nick Swartsell
Amos Project organizer Elizabeth Hopkins speaks to a crowd of more than 1,000 gathered at Washington Park to protest a mistrial in the Ray Tensing case.

As thousands streamed into Washington Park, speakers from the broad coalition of social justice and faith groups set up in the park’s central gazebo and talked about Cincinnati’s race issues — from disproportionate arrests and police shootings of people of color to the rising rents and gentrification seen in OTR in the last few years.

“We'll keep fighting until we get a conviction, until our people are free,” she said.