As they often do on Twitter, things went... rather badly. 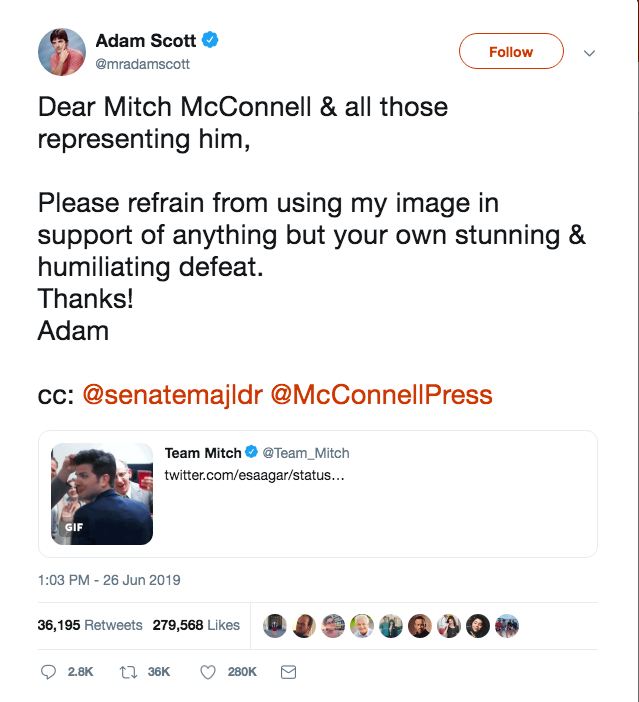 It probably seemed like a good idea at the time: a political campaign tweeting a cheeky GIF from a (sorta) recent popular television show. What could go wrong?

But then things took a... well... not great turn. At least for the campaign.

The official Twitter account for Kentucky Republican U.S. Senate Majority Leader Mitch McConnell's reelection campaign yesterday tweeted out the quick GIF of a scene from TV show Parks and Recreation that showed character Ben Wyatt (played by actor Adam Scott) winking at the camera as campaign workers celebrate behind him.

The tweet was in reference to an interview in which fellow Republican President Donald Trump indicated that, given the opportunity, he would nominate a U.S. Supreme Court Justice in 2020 — even though McConnell as Senate Majority Leader in 2016 blocked the appointment of Merrick Garland, a Supreme Court president Barack Obama's choice to replace the late Justice Antonin Scalia, because it was the end of the president's term.

But Scott is apparently not a huge fan of McConnell's. The same day, he tweeted back:

"Dear Mitch McConnell and all those representing him, please refrain from using my image in support of anything but your own stunning and humiliating defeat. Thanks! Adam."

The "Team Mitch" account fired back with a picture of a fictitious newspaper clipping from Parks and Rec showing Scott's character Ben Wyatt as the 18-year-old mayor of his hometown. On the show, that didn't go so well — Wyatt ends up bankrupting the town with a huge ice arena.

It must have been a satisfying moment for McConnell's social media team. For about an hour.

Then Scott replied with a picture of McConnell and another man in front of a Confederate flag at a Sons of Confederate Veterans event in Louisville in the early 1990s. The image has surfaced a couple of times in the past few years, but it's probably one that the McConnell campaign would rather not see pop up in its social media feed. 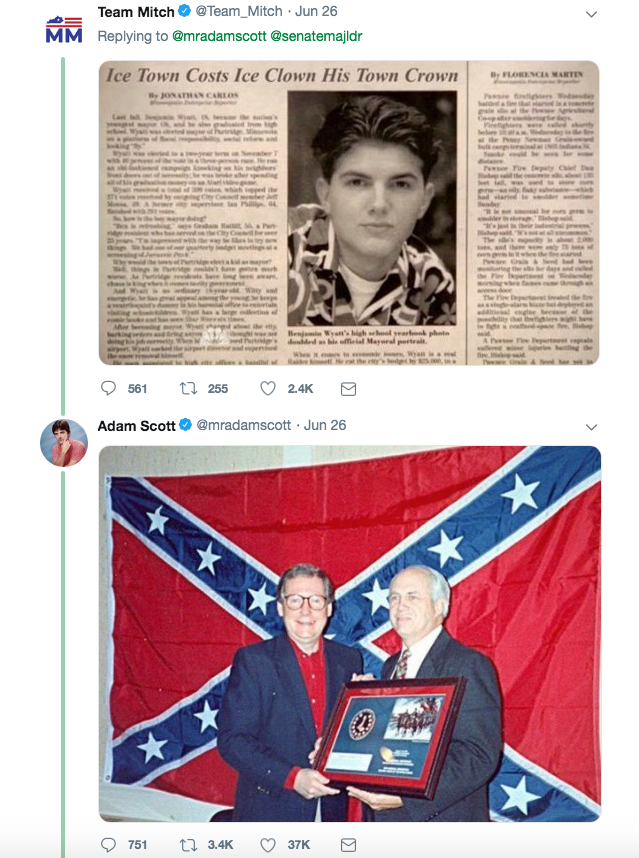 The "Team Mitch" account was then inundated with mocking Parks and Rec gifs and replies commenting on the asymmetry of the brief tussle.

"Politician McConnell tries to burn actor Adam Scott with a satirical image from a fictional show he was on," one Twitter user wrote. "Adam Scott replies with 'Thank you for this opportunity to share a real image about you that can do for you what that satirical story did for my fictional character.' ""I dunno man, guess they got you," another commenter wrote. "Reminding us that you played a beloved television character who at 18 was unable to be a proper mayor, while they support a 77 year old (white supremacist) unable to be a proper Senate Majority Leader."

Team Mitch has not replied yet.

"Yo @Team_Mitch where'd you go?," one commenter tweeted at the campaign.