This Date in Music History: March 16 On this day in 1991, Country superstar Reba McEntire lost eight members of her touring entourage when their charter plane crashed near San Diego, late at night after Reba and the band had performed a corporate gig for IBM. McEntire and her husband received the news at their hotel room nearby where they'd been sleeping. On a recent episode of Oprah's Master Class, hosted by Oprah on the Oprah channel, McEntire recalled the moment she got the news, calling it "the worst thing that's ever happened in my life." She had been extremely close with the musicians and her tour manager, some of whom had been with her for many years.

That October, McEntire released For My Broken Heart, dedicated to her lost friends. The album (her 18th) featured songs about loss and recovery; in the liner notes, McEntire called it "a form of healing for all our broken hearts." The album made it to No. 3 on the overall album charts and No. 1 on the Country charts (pretty much a forgone conclusion when Reba puts out a record); the title track became her 16th No. 1 Country single and the album's "Is There Life Out There" became her 17th.

Click on for Born This Day featuring Flavor Flav, Patty Griffin and "The Hug Guy":—-

Friedlander's profile has been raised considerably since his starring turn in Matthews and Co.'s 2001 vid. Getting his start in the biz as a cameraman on a Chris Rock short in 1989, the comedian with the distinct look (goofy trucker hat, usually with some non sequitur printed on it, oversized glasses and generally appearing as if he hasn't even seen a shower since the Carter administration) has had several roles in TV and film, from Wet Hot American Summer and Showtime to American Splendor and, um, Starsky and Hutch.

Today, he's best known for his role as aspiring lawyer turned TGS writer on 30 Rock, Frank Rossitano. But here's where most people first saw the actor/funnyman (who's actually shockingly quite handsome without the geeky ornamentation — check the pic below the video. It probably makes for some fun times when he's picking up men or women at bars — imagine that big reveal).

"What do I do for a living? Oh, you may have seen me on TV before — let me just put these glasses on and …" 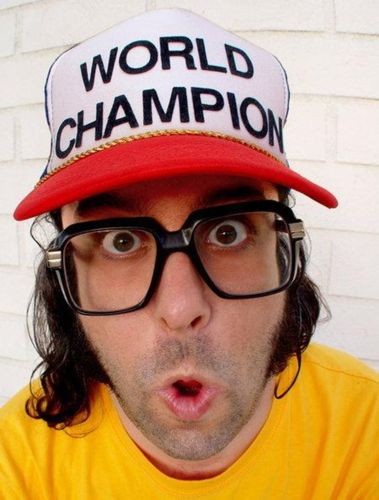