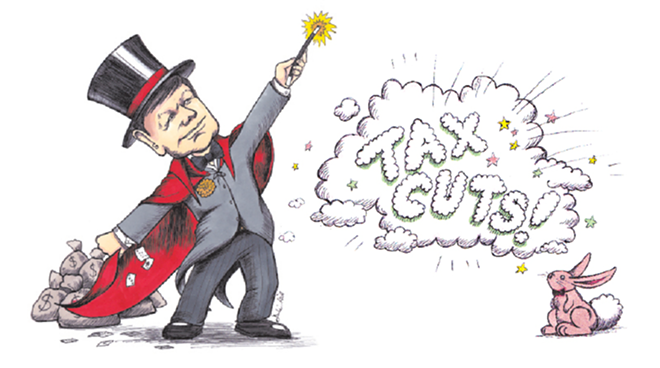 Gov. John Kasich is touting half a million dollars in tax cuts in his new budget proposal, released Feb. 2. But Ohio’s tax scheme could get more regressive if state lawmakers take it up as is.

The budget proposal would lower income taxes by 23 percent over the next two years and pay for it by raising sales taxes by .5 percent. All told, the proposal means $500 million less in taxes for Ohio residents.

Critics say lower-income residents will benefit least from the proposal. Kasich’s budget allows for a tax exemption increase for as many as 3 million low-income Ohio workers. But that exemption would mean only an extra few dollars per paycheck for most low-income families, according to most analyses. Another part of Kasich's budget proposal would require those making just over the poverty level (a bit more than $11,500 for a single person) to pay premiums on Medicaid. Those premiums would start at about $10 to $20.

Among the biggest moves in Kasich's proposal: a plan that would effectively eliminate the state’s income tax for more than 900,000 people who own small businesses grossing less than $2 million a year.

"The Ohio income tax is critical to a fair tax system and one that pays for education, health and other key services," said Wendy Patton, a director at Policy Matters Ohio, in a January statement about the state’s tax structure. "Attempts to weaken it will either redistribute income from the poor and the middle class to the rich, or cut needed public services."

Conservatives have also criticized the budget. Critics on the right, including tea party-aligned state lawmakers, say most of the changes aren’t cuts, they’re “tax shifting” that doesn’t result in the state spending less money.

Kasich’s plan does call for some measures that could help lower-income residents, including raising the income level at which parents can qualify for subsidies on child care. Other parts of the budget progressives might find more amenable include an increase on taxes associated with fracking.


Correction: due to a typo, an earlier version of this post said Ohio's sales tax rate will be 6.5 percent. This has been corrected to 6.25 percent.