The Bears wouldn't have had an album cover without the late "Mad" genius. Well, they would have, it just wouldn't have been that one. 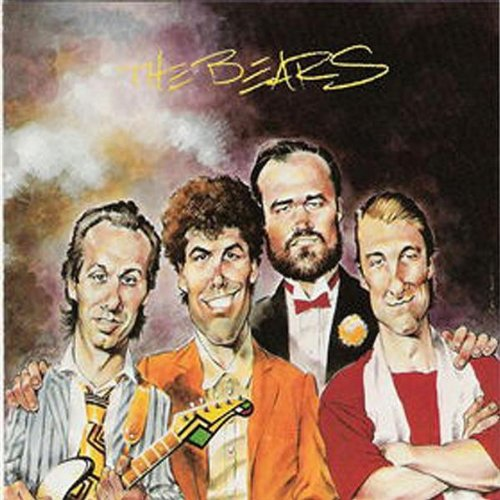 Legendary illustrator and caricaturist Mort Drucker passed away April 9 at the age of 91. Drucker's renowned career encompassed nearly his entire life; he began at 18 as an assistant on a comic book called Debbie Dean, Career Girl and the single-panel strip The Mountain Boys, then found consistent work with the publishing group that ultimately became DC Comics.

In 1956, at age 27, he joined the art staff of Mad magazine, where he was assigned the task of drawing TV parodies; he had never drawn a caricature before and quickly learned the craft, ultimately creating and perfecting the TV/movie parody format that would define Mad from that point on. In the process, Drucker became one of the best and most nuanced caricaturists in the world.

By the time he did his last movie parody for Mad in 2008, the Narnia-inspired spoof “The Chronic-Ills of Yawnia: Prince Thespian,” Drucker had crafted 238 parodies for the magazine, over half of their published total. In 2015, he was awarded the first lifetime achievement Medal of Honor from the National Society of Cartoonists, and two years later he was inducted into the Society of Illustrators Hall of Fame.

Drucker's work went well beyond the confines of Mad. He illustrated children's books, did two presidential coloring books (one for John F. Kennedy, another for Ronald Reagan), and a variety of advertisements, magazines — his cartoon for a 1970 Time magazine cover now hangs in the National Portrait Gallery — and movie posters.

Drucker also did a number of album covers over the course of his career and it was his renown as a Mad cartoonist that led to his assignment to create the cover art for the 1987 debut for The Bears, the Cincinnati supergroup comprised of three former members of the Raisins — guitarist/vocalist Rob Fetters, bassist/vocalist Bob Nyswonger and early drummer Chris Arduser — and native-son-made-good Adrian Belew, also on guitar and vocals.

Belew came to national prominence in the late '70s when Frank Zappa, on his chauffeur's recommendation, saw Belew play in Nashville and offered him an audition; Belew subsequently played on Zappa's Sheik Yerbouti album and tour, which opened the door for stage and studio opportunities with David Bowie, Talking Heads and King Crimson. Belew launched his solo career with Lone Rhino in 1982, and the following year, he was tapped to produce the debut album for the Raisins, whose line-up included Fetters, Nyswonger, keyboardist Rick Neiheisel (the once and future Ricky Nye) and drummer Bam Powell. Belew had known the Raisins since his early days in the local cover band Sweetheart and gladly accepted the production gig.

The results were spectacular. When Belew toured on his sophomore solo set, Twang Bar King, in the fall of 1983, the Raisins opened for his more-than-sold-out show at Bogart's. In the mid-'80s, after King Crimson's hiatal dissolution, Belew, Fetters, Nyswonger and Arduser formed The Bears, refracting their experimental inclinations through their mutual love of the Beatles.

With their signing to IRS Records, the band set to work on their self-titled debut, and when the time came to consider cover art for the album, another of the band's mutual obsessions surfaced.

“Every Bear loved Mad magazine,” says Fetters. “We didn't need to hide it from our parents like our dads tried to hide their favorite magazine from us.”

Belew came up with the idea of getting Drucker to do the band's portrait, but it was hardly a given. By that point, Drucker was a known commodity after his then 30-year stint at Mad, and he was wildly busy with other freelance assignments. And his high profile as an artist came with a fairly hefty price tag as well.

“We were amazed he said 'yes.' Mort was a heck of a lot more famous than we were,” says Fetters. “It didn't cost a fortune, just all the money we had.”

The Bears didn't sit for their portrait; manager Stan Hertzman provided Drucker with photos of the band to do the job.

“I remember he told Stan we were handsome,” says Fetters. “We knew that meant trouble.”

While Drucker's genius shines through on the finished album cover, Fetters noted that one major alteration was requested when Drucker sent them his initial illustration, which was apparently close to print-ready when he submitted it for approval.

“The first draft had a teddy bear in it and we asked him to remove it, or it might have been the label,” says Fetters, “You can see the shadow on the final. We left him alone after that.”

With the offending plush deftly removed — the shape of the bear's head is still visible on Fetters' lapel — The Bears' debut album cover was finalized and Drucker's illustration became the band's graphic introduction to the world. As he had done with countless Hollywood stars, Drucker captured the essence of each Bear: Arduser's casual confidence; Nyswonger's elegance (and height); Fetters' signature smirk and raised-eyebrow bemusement; Belew's quiet intensity, as evidenced by his enigmatic smile and the grip on his guitar neck.

The Bears did one more album for IRS, 1988's Rise and Shine; clearly looking to streamline the design process for the second album, the cover featured a Japanese flag. When Belew's solo and group work jammed his schedule, Fetters, Nyswonger and Arduser created psychodots, which kept them occupied for close to 30 years — the last few were characterized by their annual day-after-Thanksgiving gigs, their only activity from year to year — until the trio shelved the band with a raucous send-off at the Woodward in 2018.

The Bears never actually broke up, and the quartet has regrouped for occasional gigs over the years; their last studio album was 2007's excellent Eureka!. Belew continues to tour relentlessly and has self-released a number of solo projects, Nyswonger continues to play with various bands around town, including Tickled Pink, as an adjunct to his day job as a realtor, and Arduser has maintained his prolific solo career. Fetters has released intermittent solo albums as they fit into his incredibly busy commercial music schedule, and he also discovered Dawg Yawp and produced the band's first recordings. Most recently he's been performing living room concerts and, observing the new quarantine regulations, gigs from his own living room, which he describes as “monkey shows,” which are available to view through his website at robfetters.com.

In retrospect, Fetters allows that there are probably a fair number of people who have a copy of The Bears' first album hanging on their wall and have never actually listened to the band, simply because they wanted a great piece of art by Mort Drucker. Although no one's admitted it, Fetters always understood that Drucker's fame outranked The Bears.

“I'm sure somebody bought it for that reason,” he says with a signature smirk.

Hey, a sale is a sale. Even if the great Mort Drucker gets credit for the assist.