One of the biggest names in Cincinnati Hip Hop, DJ/producer Mr. Dibbs, yesterday released a tribute EP in honor of late fellow local artist Skandal Da Ruckus Man. Skandal passed away last month after a battle with leukemia, leaving behind a legion of friends, fans, students and family, including his daughter, and conjuring a ton of heartfelt "R.I.P.s" from artists inspired by him.

About a year ago, Dibbs (born Brad Forste), one of the Midwest's most respected and influential turntablists, found himself in the hospital suffering from the effects of Cirrhosis of the liver, a shocking turn of events for fans that led to numerous artists reaching out to raise money to help with his medical bills. In the message included with his new 5-track release tributing Skandal called Deadworld Reborn, Dibbs writes that he actually was technically dead for 53 seconds while in the hospital, not too long after issuing his then-latest release, Deadworld.

Dibbs — a member of the popular Rhymesayers crew, tour DJ for Atmosphere and a founder of Cincy Hip Hop institutions like the DJ collective 1200 Hobos and the legendary Scribble Jam festival, to name but a few of his accomplishments — writes that he was in the hospital for several weeks but that it wasn't as bad as it could have been because his longtime friend Skandal was at the same hospital, fighting his leukemia, and the pair hung out together as much as possible.

"Holed up in the hospital for a few weeks, I was an inadvertent resident of an impromptu hip hop retirement home," Dibbs writes. "Battling leukemia on the floor above me was my longtime friend Marcus 'Skandal da Ruckus Man' Mitchell. An epic MC and producer, of equally epic bodily proportions, Skandal’s heart was big, but his production skills and lyrical largesse were even bigger. I dragged my sometimes half-incoherent ass, IV and all, down the hallways and into the elevator to visit my homie. The nurses always thought I was lost. Fuck that.

"I was FOUND…in the strong lifeline we’ve all come to know and love as Skandal. He was my pusher man…keep on pushin’, Dibbs, until you get to the other side of you."

Deadworld Reborn is a dynamic mix that blends tracks from Deadworld that feature artists ranging from Doseone, Brother Ali and Murs to Juliette Lewis and The Black Keys. The release also features the Dibbs/Skandal collaboration "Where Pigs Fly," which you can sample below.

Deadworld Reborn (which has already been drawing attention across the web) is available as a "pay what you want" download. All proceeds are being donated to Skandal's family and daughter Chloe. Click here to purchase Reborn and read the rest of Dibbs' tribute to the man he says "gave me back my fucking life."

According to Rhymesayers, the release will be issued on picture-disc vinyl soon, featuring the image at the bottom of this post.

"I wish I could be like that dude," Dibbs writes. "He made me feel important enough for me to be reborn. I am doing it. I am doing it now."

For more on Skandal, read Mildred Fallen's 2005 interview with him here, her recent tribute to him here and Kathy Y. Wilson's essay about him here. 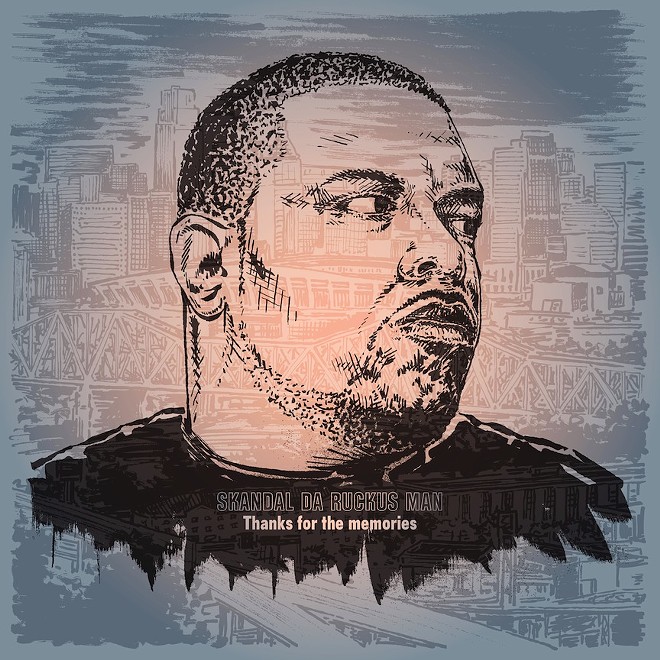