Soul food plays a big cultural role in the West End, residents say. Can one of the last places to get it survive a move to make way for the Major League Soccer stadium coming to the neighborhood? Starting at about quarter before 1 pm, the cars line up on West 15th Street and the customers wait outside the West End carryout Just Cookin' for tender, crumbly cornbread toasted dark brown around the edges, fall-off-the-bone ribs dripping sauce, crispy fried chicken and mountains of orange mac and cheese.

This day, however, Monica Williams has some news for the customers lined up out the door. The business, one of three renting space around a pale blue 100-year-old theater-turned church in the footprint of the coming FC Cincinnati stadium, is asking for help moving — and says it may close if it doesn't receive it.

Williams, who started the restaurant six years ago, got word earlier this year that she would need to move to make way for FCC's $200 million soccer stadium after the team announced it was building on the site of Cincinnati Public Schools' Stargel Stadium across the street. The team, which recently won a Major League Soccer franchise. will rebuild Stargel nearby.

FCC has offered Williams $20,000 in relocation assistance, she says. But she claims that won't be enough to keep her in business through a relocation, so she set up a GoFundMe account for Just Cookin'. She's hoping to raise another $15,000 for the move through the crowdfunding site.

"I funded my own business without loans," she says. "This is the first time ever I’ve asked for help. I really don’t know the future of Just Cookin' at this point, if there is a future."

In between pulling food trays from the buffet-style table that greets customers in the small carryout space, Williams juggles two phones. On one, she is taking calls about the restaurant, quickly rattling off to customers a long list on the day's menu from memory without pauses or hesitation.

"No, I didn't say cubesteak today, sorry," she says. "But yes, we have the meatloaf and grilled salmon."

On the other phone, she is calling up Cincinnati City Council members — asking what she needs to do next, telling them that she is committed to helping herself but also reminding them she isn't the only one depending on the business.

Sometimes, she’s on both phones at once, telling someone about ribs on one while council members promise help on the other.

There are still some zoning considerations and other city loose ends the stadium must navigate. Council approved a community benefits agreement between the team and a few representatives from the neighborhood earlier this year — something a board  mostly appointed by Mayor John Cranley will oversee.

Williams estimates she serves more than 100 people during the shop's eight-hour day, and says eight other people work at the restaurant in addition to her. On this day, in the sweltering kitchen behind the service counter, that includes Williams' grandmother, Ossie Mae Stewart, who sits at a table peering over her glasses as she carefully chops greens. Williams' mother, meanwhile, is hustling food back and forth between the kitchen and the carry-out window, and her father is cutting up chicken.

Williams credits Stewart with teaching her how to cook, especially when it comes to the southern favorites like yams and greens. Stewart came to Cincinnati in her early twenties from Troy, Alabama. Her mother died young, and the tasks of supporting her brothers and sisters fell to her — including the cooking. She got a job at Lazarus downtown, where she sharpened her skills in the department store's cafeteria kitchen.

“That’s where all this food originated from — Troy, Alabama," Williams says. "My food doesn’t compare to her cooking. I’ve got it a little bit, but I can’t touch her.”

These days, Stewart floats from station to station in the kitchen, filling in where she's needed. She's proud of her granddaughter, she says, and also likes getting out of the house and working. 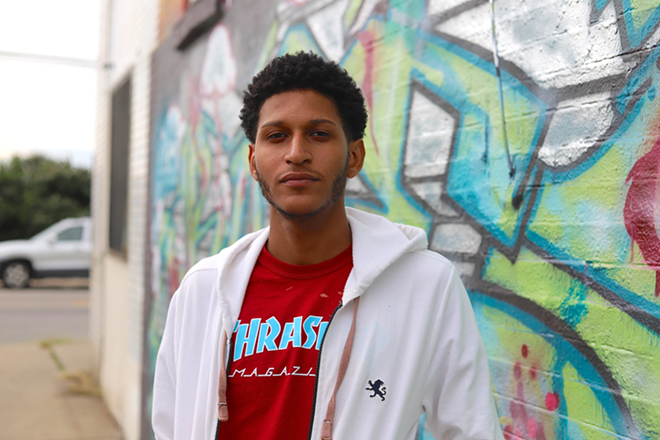 Working the walk-up window is another relative of Williams' — Dante Watson, who is her nephew. Watson says Williams gave him his first job, and he's been working off and on between moves and school ever since. For him, currently couch surfing between family members, the restaurant is a now-fragile symbol of stability.

"We’re all a family, and we stick together and help each other out," he says. "I’ve been down here my whole life and this is what we know, and now they want to come and build a stadium. It could cost me my job. I already don’t have anywhere to live. What are you trying to do? It’s just hard. This is our community."

Initially, Williams was hopeful about the development of the stadium, saying she was told she would need to move sometime before the new year and that the team would help her find a new place. She even took some trips hunting for spaces with former Cincinnati Mayor Mark Mallory, a West End fixture who works for the team doing community engagement.

Williams is less enthused about the move these days after learning that she will need to be out by November and that assistance will come as the single payment from the team plus a small amount from her landlord, Rev. Patrick Winkler. In addition to Williams' soul food restaurant, Winkler's property includes his church, Lighthouse Ministries, and a long-running barber shop run by Jason Briers as well as Briers' residence and a convenience store run by Briers' brother.

The convenience store and the barber shop took the $20,000. Williams, however, initially held out, saying it wouldn't be enough for her.

Briers took over the barbershop from his father, who founded it in the West End in the 1960s. He says he's still looking for new locations for the shop and his residence, though he expresses some doubt about whether he'll be able to stay in the barber business.

Eventually, Williams took the team's offer, though she says she will still need more help from other sources.

"It has been my pleasure to work with Monica Williams for the past five months, meeting dozens of times, to help her relocate Just Cooking," Mallory wrote in an Oct. 11 statement. "Ms. Williams has been a month-to–month tenant in a building owned and sold by a third party on the site of the future West End stadium.

"Jeff Berding and I had a fruitful, positive meeting with Ms. Williams yesterday. The parties have entered into a Relocation Assistance Agreement in connection with the relocation of Just Cooking.  The parties have agreed that the terms of the agreement are confidential. FC Cincinnati is proud of our support and efforts for Ms. Williams and the other two property rental business tenants located in the future stadium site."

Nick Swartsell
The block at W. 15th Street and Central Avenue that will need to be demolished for FC Cincinnati's coming stadium.

Records with the Hamilton County Auditor don't reflect the sale of the property yet, but sources close to the situation claim the eventual agreement could be worth millions, perhaps in the form of a new church facility elsewhere. Another business a block away, Tristate Wholesale Building Supply, reportedly received $25 million from the team for its land. That business will receive tax abatements and city land worth $176,000 to move to Lower Price Hill, where it will construct a new, $6.7 million headquarters.

Originally, City of Cincinnati administration recommended selling a portion of the Queen City Barrel site the city owns to Tristate for $1. But some members of Cincinnati City Council objected, citing the reported price the company had received from FCC. Council this week passed a deal that has the company contributing the $176,000 value of the land into a fund for affordable housing in the West End.

Some community opposition to the stadium in the West End — including a community council vote opposing its construction — resulted in wrangling between the team and residents, though FCC eventually signed a last-minute community benefits agreement with a team of community representatives.

Williams has some relocation prospects, but says places she's found as potential relocation spots are charging at least double the $650 a month she's paying now for rent. Plus, there will be costs for build-out at any spot she's looked at. That expense alone could easily cost more than the money she has, she says. And if she's going to move, she'll need to market her new location and try to draw new customers in addition to her regulars, she says.

Competing with other businesses will also require more equipment and a few more employees, Williams says.

Chuck Martin is a manager at Gordon Food Service, which supplies everything from take-out containers to a variety of meats to Just Cookin’. He says he’s watched Williams’ business expand substantially during the five years GFS has worked with her.

She’s drawn her share of committed regulars, and also some special out-of-town guests.

“Her type of cooking appeals to different demographics,” Martin says, noting that Danny Glover and other celebrities have dropped by multiple times in the hunt for good home-style cooking. “Definitely among some Hollywood actors familiar with soul food, that’s the place they go.”

Williams didn’t mention Glover’s visits at first, but when asked, she proudly showed a photo of the actor smiling inside the restaurant.

“What we’ve seen is a small, single minority, female-owned business that has really flourished and prospered,” Martin says, noting that Just Cookin’ is one of his top customers. “She single-handedly created a very successful business with few to no advantages. Unfortunately, it sounds like she’s going to have to do it all over again.”

Williams grew up in the neighborhood’s Lincoln Court, a Cincinnati Metropolitan Housing Authority project, but moved to Westwood after a program called Hope VI was launched in 1999 and resulted in the apartment complex’s removal.

Years later, she returned to live in a townhouse in City West, the mixed-income development built as part of the Hope VI project. Fueled by her love for the neighborhood, Williams started Just Cookin’ six years ago. At first, she did her favorites — lasagna, hot wings, salads. Those didn’t take off like she wanted them to, but the neighborhood spoke, and, as she says, designed the menu for her.

The fare is a continuance of a long tradition in the neighborhood, says regular customer John Lee Smith. For decades, Smith and his father, James Lewis, have lived in a building and run a barber shop at 15th and Elm a few blocks away in Over-the-Rhine.

"There used to be a lot of soul food restaurants here," Smith says between inquiring about other regular customers' families as he waits in line with them outside. "Now she's the only one. She's the only one who has taken the time to bring it back to the bottoms, as we call this neighborhood here. It means everything. Where else can you get a filling meal? This is the only place you can come and get a good meal, where you get one plate and feed two people."

Smith sees the changes coming with the stadium as part of a longer cultural shift.

"I've been here on 15th Street since 1960," he says. "This has been my little stomping ground my who life. I went to high school here. I've seen the area change, come back. They're knocking all this out, whatever they're trying to do with that kickball stadium there. We're one of the few black families that own a business here, and when we go, and she goes, that'll be just about it."