Which Ohio Mayor Had a Sexual Encounter with an Alleged Chinese Spy in a Car That Was Under FBI Surveillance?

Axios reported last night on the tale of Christine Fang, a Chinese national who allegedly worked as a spy and developed ties to U.S. politicians — including an Ohio mayor in office between 2011 and 2015. 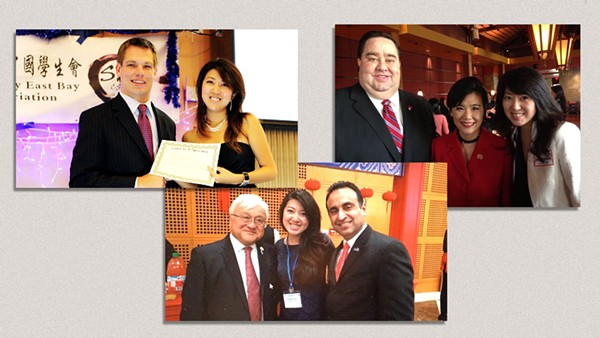 Which Ohio mayor had a sexual encounter with an alleged Chinese spy in a car under FBI surveillance?

That's the question that has Ohio politicos and political journalists positively aflutter today, with conjecture flying wildly via texts and DMs.

Axios reported last night on the tale of Christine Fang, a Chinese national who, according to a yearlong investigation by the outlet, worked as a spy and developed ties to politicians in California and across the country from 2011 until 2015, when she left the U.S. amid a tightening federal investigation.

Though officials said it was unlikely that she harvested any serious classified information from her targets, which were mainly young politicians on the rise, she did have access to intimate personal secrets as her relationships moved from professional to personal and even sexual.

The broad reach of Fang's ties, made and then nurtured through political contributions, networking, attendance at rallies and functions, is astounding and included city councilmen, state reps and a member of those in Congress.

Once she popped onto the FBI's radar via an unrelated case, that broad reach became quickly apparent and she was put under surveillance.

"The fact that she was traveling around the country" getting close to U.S. politicians "was a big red flag," one of the officials who spoke to Axios said. "She was on a mission."

And that mission included one Ohio mayor, who is not named in the piece.

Fang engaged in sexual or romantic relationships with at least two mayors of Midwestern cities, said one U.S. intelligence official and one former elected official.

At a 2014 conference in Washington, an older Midwestern mayor "from an obscure city" referred to Fang as his "girlfriend" and insisted the relationship was genuine despite the clear age difference between Fang and himself, according to former Cupertino Mayor Gilbert Wong, who was directly present for the conversation.

Fang also had a sexual encounter with an Ohio mayor in a car that was under electronic FBI surveillance, said one current U.S. official. When the mayor asked why Fang was interested in him, Fang told him she wanted to improve her English, the same official said.