Saeso is adjacent to The Carriage House, a posh Pendleton Airbnb just off 13th Street 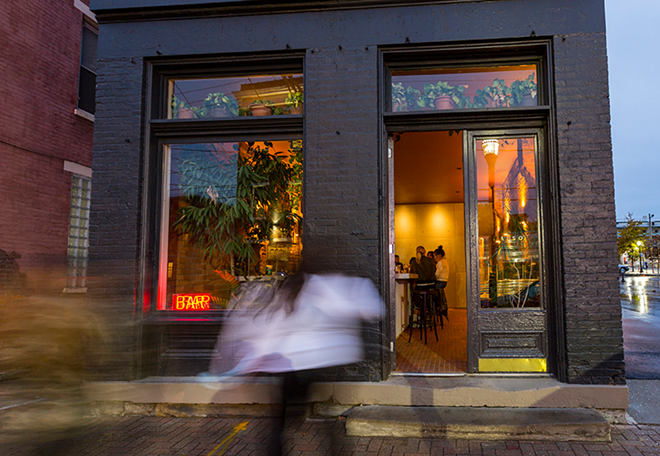 If you’re looking for an otherworldly escape without leaving the city, or a cocktail menu that takes the work out of ordering, Saeso might just be your new neighborhood bar.

“When you walk through the door, your experience starts. You don’t have to figure it out,” says Christy Wulfson.

She’s one half of Guilfoil & Wulfson (Michael Guilfoil is the other), the design duo behind Saeso and The Carriage House, a posh Pendleton Airbnb just off 13th Street that sits adjacent to the bar. Saeso opened for service in October and has been operating at limited capacity since. (The 900-square-foot space typically seats 12 at the bar, but less now for safety.)

Having designed bars for clients, they’re no stranger to the build-out process. But this is their first time being on the ownership end of a bar.

“Up until our doors opened, we knew what we were doing, but now we’re just making this up as we go,” Wulfson says, laughing.

The idea to open a bar called “Saeso” had been simmering in their minds for over a year. The name is a nod to Caeso, Lucius Cincinnatus’ rebellious son. The alternative spelling was born out of necessity, after far too many people mispronounced it.

“It’s C-A-E like Caesar, but people were saying ‘queso,’ and we just couldn’t do that,” says Guilfoil.

After finishing up The Carriage House, they acquired an adjacent building on Sycamore. They had been working out of the upstairs during lockdown and decided it was time to realize their dreams of creating Saeso in the downstairs space. They compiled a small team and contracted the place themselves. Guilfoil has experience hosting events, which overlaps a good bit into the food and beverage industry, but his first time pulling a shift behind the bar was the day Saeso opened.

The backbone of Saeso’s bar program is efficiency. An uncomplicated menu makes for a manageable shift for the bartenders, which in turn makes for faster, more focused service for guests.

The front and back bars were designed in such a way that the employees would never need to cross paths, which means they have enough space to work without bumping into one another when it’s busy — and, currently, the set-up allows for better social distancing behind the bar. 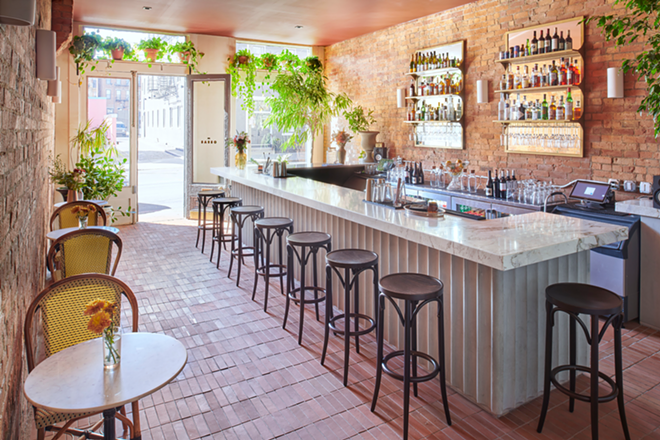 For now, they’re only running the front bar to minimize capacity, so it must be able to be run as a one-man show. No beer taps means no frantic dash to the basement to address a blown keg during a rush. An ice machine in both bars nixes the need for mid-shift refills and keeps each bartender at their station.

“We eliminated those problems with design,” Guilfoil says. “The more important thing is being a good host, not ‘where’s the ice?’”

No kegs doesn’t mean no beer. But if you’re looking to drink local beer, you’ll have to go down the street. Luckily, you won’t have to travel far. Saeso is sandwiched between BrewDog and Braxton and they know their place.

“We were never planning on being a beer bar,” Wulfson says.

You can still grab a can or bottle from a limited rotating selection. Saeso stocks some classics: Peroni, Red Stripe, High Life and the like.

The house cocktail menu is, as Guilfoil puts it, “no gimmicks.” There are six house cocktails — $12 a pop — each centering around one liquor, mostly straightforward with a twinge of creative freedom. Tequila pairs well with smoky-sweet and spicy; rye whisky with tartness; gin and fizz. But what about a dirty martini with pepperoncini juice instead of olive? Or a splash of Malbec atop a rye whiskey sour?

“It’s not that you’re here to taste something you’ve never had before,” Wulfson says. “If the bartender comes up and asks, ‘Do you want another one?,’ you don’t have to stop and think, ‘No, maybe I want to look at the menu some more.’”

Photo: Ross Van Pelt
The cocktail list at Saeso is "no gimmicks"

And then there’s the clarified milk punch. This cocktail doesn’t use milk as a flavor component so much as it uses milk as a clarifying tool. Suspend your sense of disbelief for a moment. The first iteration was a batch of Earl Grey tea, lemon juice, rum and vodka. The milk curdles upon contact with the acid from the lemon juice and then the whole concoction is strained through cheesecloth, leaving behind all color and curd.

“What comes out looks and feels like a pinot grigio,” Wulfson says.

It’s crystal-clear, sparkly almost, thanks to the curds. It’s a mainstay on the menu, but will be adjusted seasonally. The current punch situation swaps an orange spiced tea for Earl Grey and adds cranberries.

“It’s going so fast I can hardly keep up with it,” she says.

The most time-consuming part of the development process wasn’t concocting the cocktails, “it was the lighting and the music,” Guilfoil says, which is to be expected from a pair of designers. “Usually when the lights are low, you look good, there’s no shadows, the music’s loud — you just want to be there longer.”

They’ve created a space where they’d like to sit and enjoy a cocktail and invited you to join. You can linger, say yes to that second cocktail and bask in the terracotta glow.

There’s a quality about Saeso that’s hard to place. It’s vaguely nostalgic and equal parts familiar and foreign, reminiscent of many places all at once.

“Everyone who walks in here (says) it reminds them of somewhere they’ve been, and no one ever says the same place; Argentina, Mexico City, Lisbon, Rome, all across the globe,” says Wulfson.

In a time when travelling is limited, Saeso offers a brief escape from the here and now, where guests can stop in for a glass of beer or a cocktail and “feel like they’re somewhere else,” Wulfson says. “People aren’t going out as much, so when they do go out, they want it to be special, and they are always so grateful.”