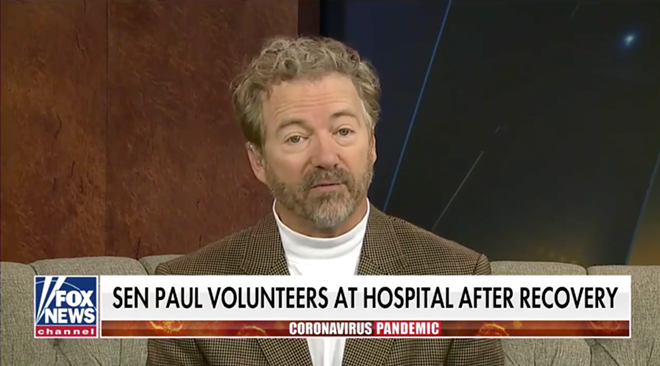 Growing a beard in quarantine is a popular trend among those who can produce facial hair.

Women's Wear Daily called the corona beard "men's new quarantine hobby," USA Today offered a guide on maintaining your new beard and Vogue offered expert tips on how to grow your own.

It seems Kentucky Senator Rand Paul has been taking notes because he has surfaced from quarantine with a new look.

Rand Paul has emerged from his Covid quarantine and has a beard now pic.twitter.com/54FMWTJT8P


The senator gave his first interview since recovering from the coronavirus on Fox & Friends, where he joked that his family banished him to the basement and agreed to feed him but refused to send down a razor.

He says he only went to the doctor because he had been traveling so much and may have been exposed.

Paul, also a doctor, is now volunteering at a local hospital.

On March 22, he was the first senator to test positive for novel coronavirus COVID-19. Paul's office announced he had a confirmed case of the virus in a statement.

"Senator Rand Paul has tested positive for COVID-19," the statement tweeted from his official account reads. "He is feeling fine and is in quarantine. He is asymptomatic and was tested out of an abundance of caution due to his extensive travel and events. He was not aware of any direct contact with any infected person.