When the first passengers board the Cincinnati Streetcar on Sept. 9, we will finally begin to redeem ourselves for a long history of regressive thinking and major transportation failures. 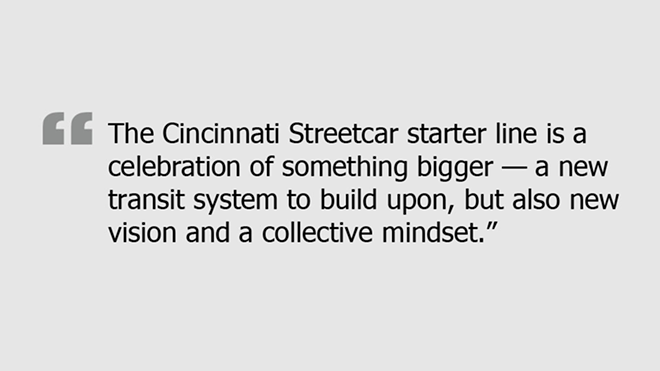 EDITOR’S NOTE: CityBeat has invited three local activists to write monthly columns on pressing issues facing Cincinnati. Derek Bauman is a public transit and urbanism activist and also a suburban Cincinnati police officer. His column will appear in CityBeat the third week of each month.

There is much to celebrate on Sept. 9, 2016 — the day the Cincinnati Streetcar finally opens after nearly a decade in the making. As the first passengers board our new transit loop, we will finally begin to redeem ourselves for a long history of regressive thinking and major transportation failures.

Let’s go back to the beginning of our city’s transit phobia.

In the mid-19th century, Cincinnati and the civic powers of the time clung to the riverboats even as the railroads were making their way westward, seeking out a new national transit hub. The riverboat magnates even held up construction of the Roebling Bridge for years because of concerns about obstructing river traffic.

Ultimately, while Cincinnati dragged its collective feet and clung to the past, the railroads focused their attention on Chicago as their new hub and gateway to points west.

Once again, beginning around 1915, progressive leaders realized that for Cincinnati to compete, a modern transit system would be needed. The resulting plan was a transit loop that included a downtown subway and surface-running rail, whose right of way instead ended up turning into I-75, the Norwood Lateral and I-71.

But World War I interrupted construction, post-war inflation drove costs up and political differences spelled the end of the transit loop.

The civic shame lingers in our empty subway tunnels to this day.

The Urban Mass Transit Act of 1970 offered another opportunity for Cincinnati, with a $12 billion federal fund for subway and heavy rail construction. Unlike the 80 percent federal/20 percent local deal that fueled highway construction, UMTA required a 50 percent local match.

Though the city could probably have used the already-constructed subway tunnels for a portion of this local match, Cincinnati and Hamilton County took a pass, and federal dollars instead went toward building major transit systems in Washington, D.C., the San Francisco Bay Area, Seattle and Atlanta, among others, fueling their growth.

Cincinnati continued to bleed population, which not coincidentally peaked in 1951, the last year a streetcar ran the 250 miles of track in the city. Just five years prior, the city’s streetcar system provided more than 123 million rides. Its ridership numbers broke at least 100 million a year for decades. Contrast that with today’s Metro buses, which provide a quarter of that number.

The misnamed Southwest Ohio Regional Transit Authority, which runs Metro, was formed in 1973. Unfortunately, there is nothing regional about it.

Meant to be a temporary provision until Hamilton County passed a sales tax, the paltry 0.3 percent still exists nearly half a century later, providing barely enough resources to keep the lights on and the buses running.

In 2002, the region had another shot with the MetroMoves plan that would have built light rail lines on I-71 and I-75, finally getting use of the subway right of way for transit as it was intended. The line would have run up I-74 and ultimately into Northern Kentucky to “Cincinnati’s” airport.

The plan also included a combined walk, bike and rail corridor on Wasson Way, enhanced bus routes and an “urban circulator” — or streetcar — connecting downtown to Uptown. Coming off the recent stadium tax debacle and the civil unrest of 2001, the half-cent sales tax to fund the $2.6 billion, long-term project went down in flames.

While leaders took a sober look into the ashes of defeat, some distinct voting patterns emerged. The highest support for the MetroMoves plan came from the center of the city — downtown, Over-the-Rhine, Avondale and Bond Hill, along with adjacent nearby neighborhoods.

The plan had two-to-one support in the core of the city, along the planned streetcar route. That support ran two-to-one and three-to-one against the outer precincts of Hamilton County.

The racial realities of the voting patterns appear rather clear, though they weren’t discussed in polite social circles at the time. Yet there was that pattern of support through the core of the city that provided hope.

And that is how planning for the Cincinnati streetcar began.

History has shown that Cincinnatians are a cautious lot who look skeptically at ambitious plans and the unknown. But here was something we could do, on our own, without county or regional support, necessarily. This modern streetcar was something that could put us, finally, on the path to transit redemption in a modest, manageable scope.

And we have finally arrived — after another decade of planning, of fits and starts, of opponents’ same tired game plan of block, obstruct and delay in hopes of wearing down and waiting out public support of transit.

Through the efforts of many, here we are. Congratulations, Cincinnati — you have turned the corner. But this isn’t the end — this is the beginning.

On Sept. 9, 2016, we will prove that we are no longer transit’s Charlie Brown. Mayor John Cranley gave transit obstruction one last dying gasp, attempting, like Lucy in so many Peanuts cartoons, to pull the football away at the last second. But in the end, he was denied the opportunity to do so.

The Cincinnati Streetcar starter line is a celebration of something bigger — a new transit system to build upon, but also new vision and a collective mindset.

This time we kicked the ball right through the uprights. The next play is right up the middle to Uptown — exactly where the voters told us they wanted to go.

And with a frame of reference building on success and a bit less trepidation, the discussion can, refreshingly, begin anew.