Actors Theatre of Louisville is presenting Tony Kushner’s Pulitzer Prize-winning two-part play about a web of eight friends, lovers, enemies and strangers struggling to make sense of a world plagued by AIDS and a disappearing ozone layer. 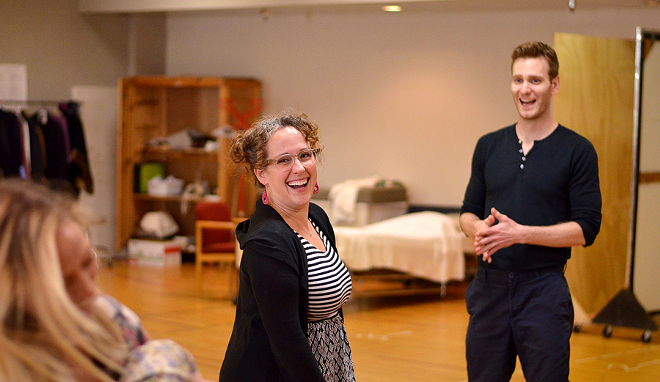 Meredith McDonough has loved Tony Kushner’s immense Pulitzer Prize-winning two-part play, Angels in America, since she was 16. She attended its 1994 Broadway debut six times while enrolled in a summer pre-college program in New York City. “You could get $20 rush tickets if you waited in line all day,” she says. “It was two rows of folding chairs above the lighting grid.”

She was enthralled with the theatrical landscape Kushner created, both intimate and epic. In the chaos of the mid-1980s, a web of eight friends, lovers, enemies and strangers struggle to make sense of a world plagued by AIDS and threatened by a disappearing ozone layer. At the conclusion of Millennium Approaches, Part One of Angels, a heavenly messenger literally crashes through the ceiling above Prior Walter, the play’s AIDS-infected central character.

Describing the show’s impact on her teenage self, McDonough says, “There was just something about it that I found so tremendously moving. It was happening in the late ’80s and early ’90s, when the AIDS crisis was still everywhere. It’s been incredibly important to me.”

Millennium Approaches was produced at Actors Theatre of Louisville during McDonough’s apprenticeship there in 1997-98. In 2002, as a grad student at the University of California, San Diego, she directed it. She returned to Actors Theatre in 2012 as associate artistic director; now she’s staging both Millennium Approachesand Perestroika, Part Two of Kushner’s seven-and-a-half-hour dramatic behemoth.

“The play has immediate relevance to today’s world,” McDonough says. “Looking back on it now, I don’t understand how anybody does just Part One. You get to the end of Part One, and there she is — a beautiful angel. You assume that great things are coming from her. But her message is, ‘I need you to stop moving.’”

Prior battles the angel throughout Perestroika. That gives Kushner’s show, subtitled “A Gay Fantasia on National Themes,” contemporary relevance.

“Right now, there are a lot of people in this country who would like to go backward or at least just stop,” McDonough says. “If you look at what’s happening today all over the country, you’ll see people saying, ‘No, we will not go backward. We will resist those who would create a false past and a false history.’ The play’s message is not subtle; it’s about forward motion.”

She convinced Actors Theatre artistic director Les Waters to let her stage the entire show. “We should do both parts of this because it’s a play about marginalized people that are coming together to say we won’t stop moving,” she says she told him. “As Prior says, ‘The world only spins forward.’ ”

She’s particularly interested in one of Angels’ characters: a fictionalized version of Roy Cohn, the closeted, power-hungry attorney who’s in total denial that he has AIDS. “It’s crazy to listen to the play now because Cohn was such a mentor to Donald Trump,” McDonough says. Cohn’s rhetoric and self-aggrandizement, which once sounded like comic relief,  are today painfully echoed in the White House.

Why should audiences today care about a political play written 25 years ago?  “First of all, I think it’s the most beautiful play ever written, a Pulitzer Prize-winning, epic theatrical masterpiece,” McDonough says. “Kushner’s intricate weaving of these characters reveals the basest and most beautiful in human nature. And what is happening in this country right now is terrifying — the amount of our country that’s losing its mind and very dangerously sentimentalizing a false past history — that’s what this is fighting against.

“It puts a marginalized group at its center,” she continues. “It’s not about white-straight-male America. It’s actually about the difficulty to continue to have more opportunity and more life. It’s a play that asks for more life — over and over. We all need to come together and sit in a shared space in the dark with other strangers who will share that experience. That feels very critical to me right now.”

ANGELS IN AMERICA PART ONE: MILLENNIUM APPROACHES is playing now through Oct. 10; PART TWO: PERESTROIKA follows Sept. 19-Oct. 14. There are some opportunities to see both in a single day. More information: actorstheatre.org.