The God and the Machine

The god in Manifest Gallery’s Deus Ex Machina does not arise from the traditional machine (that crane elevating a Greek actor of ancient times to meet a plot need for divine intervention), but instead from our handy modern device, the camera. 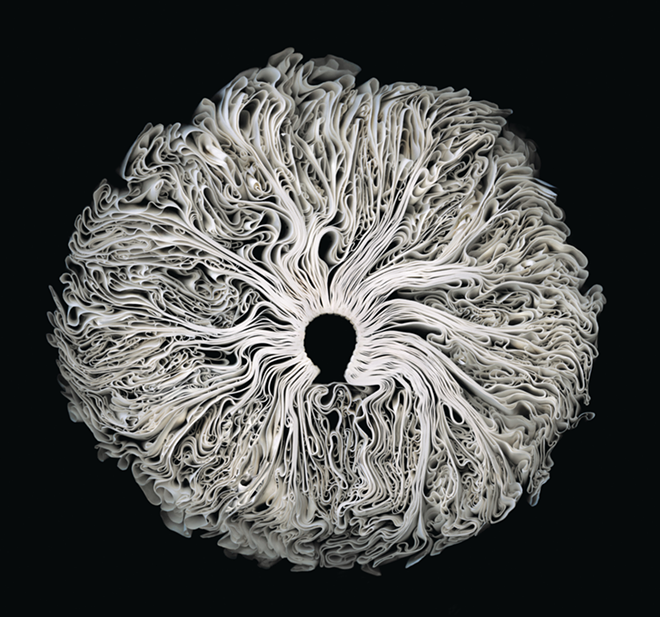 The god in Manifest Gallery’s Deus Ex Machina does not arise from the traditional machine (that crane elevating a Greek actor of ancient times to meet a plot need for divine intervention), but instead from our handy modern device, the camera. And what sort of godly image emerges when a camera is looking for one? A considerable variety, many quite beautiful.

Art is not necessarily beautiful, these days, but when it is there’s no denying the pleasure. Laura Hennessy’s “Dictionary (Book Series)” (2012) is an immediate delight rewarding further thought. The book is no longer recognizable as such. Its spine has been forced into a circle surrounded by a tangle of pages, looking more like some fanciful vegetable than something so serious as a dictionary. Printed in black and white on an aluminum plate, the elegant composition is given a fine sheen by the metal surface. Is “Dictionary” an elegy? In making this book a visual object rather than a useful one, does the artist note the diminishing importance of books themselves, their original purpose no longer theirs alone?

The exhibition is made up of roughly half color and half black and white works, with the latter holding their own even against the aggressive colors of Jim Shirey’s “Precious Fruit” (2012). Life force seems to be Shirey’s subject here, abstracted into fluid shapes at edges of the work. “Precious Fruit” is one of several pieces in this show adopting a pronounced horizontal format, perhaps three or so times as wide as high. Such proportions mark Bethany Pipkin’s “Echoed Plexus” (2012), a digitally altered scanning electron micrograph. This photograph makes plain that black and white are all that’s needed for a work reflecting swirls of movement caught and stilled.

The only local of the artists in the gathering, which range as far as Johannesburg, South Africa, is Matthew Albritton of Fort Thomas. His “Pilgrimage” (2003) is also a striking black and white horizontal, a broad expanse broken only by a few upright poles at left and the single figure of a man at right. Loneliness pervades. Still another strong black and white is the large pigment print on German etching paper, “Butterfly” (2012) by Nathalie Bertrams. A lovely young girl is caught in grand stride, back-lit, her big fishing net slung over her shoulder like a wing of her own.

Color makes for another world, and produces prints impossible to black and white. Michael Gard’s “Winter Mountainside, Alaska” (2004) is an exploration of subtle alterations in sunlight and shade on a landscape known mostly to Alaskans and apparently seen by Gard himself from an airplane. It’s another of the beauties of the exhibition.

Marcella Hackbardt’s two works also demand color and, like “Dictionary (Book Series),” invite a search for meaning. In “Imminence” (2010), a woman is at far left in the composition, facing left and gently holding a large and handsome orange and white snake. Variegated clouds dominate the background, perhaps anticipating danger and trouble ahead? In “Spinning” (2010), Hackbardt projects a wholly different scene from “Imminence.” Here, we take a moment to recognize the central figure as a human spinning rapidly; a globe is at left and a much smaller globe at right is surrounded by representation of the heavens, all this against a plain dark background. Everything in “Spinning” is understood to be in motion. Will nothing stay the same?

Deus Ex Machina was guest curated by Dennis Kiel, former photography curator at the Cincinnati Art Museum and now chief curator at The Light Factory in Charlotte, N.C. Kiel looked for works that “challenge the viewer to take a closer look and ultimately make those discoveries they never thought were there.” Eleven artists from 106 entrants made the cut for the show.

Manifest enters its ninth season with an innovation, regularly scheduled gallery talks for each exhibition period by Gallery Curator Tim Parsley. This month Parsley will discuss Deus Ex Machina and Holding On at 7 p.m. Tuesday, a free event open to the public.

DEUS EX MACHINA and the accompanying shows are on view through Oct. 26 at Manifest Gallery (