'Swim Team' was originally released on cassette as part of a limited-edition subscription series. 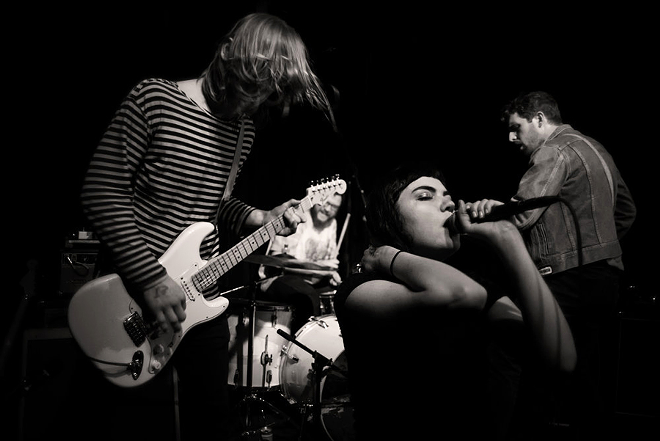 Photo: Provided
Swim Team
Last year, Cincinnati foursome Swim Team released its debut album through respected indie label Infinity Cat Recordings, but the release came with a catch — it was released on cassette, a part of a limited-edition subscription series from the label. The series sold out, but those who missed it get another crack at owning the album, this time on vinyl, as Swim Team gets a fresh release through Bloomington, Ind.’s Let’s Pretend Records this Friday (order here).


Before the group heads off on tour, it will host a hometown release show Friday night at Northside Tavern (4163 Hamilton Ave., Northside, northsidetav.com). The Fairmount Girls and Slugsalt open the 10 p.m. show.

The group’s debut is impressively diverse — just when you think you have Swim Team figured out, the album switches gears dramatically. Opener “Dirty Work” is a hyper-catchy, almost sugary nugget of strutting Punk Pop, but by the second track, “I’m Fine,” Currens steps her vocals up to a full snarl and the band explodes into a more ominous slash-and-burn approach. Elsewhere, “Cherri Girls” has a shoegazer-meets-’60s-girl-group vibe; “Everything Went Wrong” is what Enya might’ve sounded like if Guided By Voices had guided her career; “Teenage Mind” is more sweetened, slanted Pop (featuring only Currens’ voice and a distant guitar); and the album closer, “Closest Thing,” is a chugging slice of soulful basement Rock.

Several highlights are of a more straightforward variety, though that’s relative when it comes to Swim Team. Even when the songs are more direct — like “Reanimator,” “TV” and “Crash Life” — there is always something interesting and unique between the grooves that catches the ear. While the songwriting is consistently compelling, Swim Team is a great piece of work taken as a whole. Hopefully LP No. 2 will be out sooner than later, no matter what format.

Swim Team recently issued a new video clip for "Reanimator" in honor of the vinyl release:

• When the Bunbury Music Festival returns Friday-Sunday to the riverfront’s Sawyer Point, it will once again include a few Cincinnati acts in earlier time slots. Flying Underground, the evolving Pop Rock project formerly known as Brian Lovely’s Flying Underground and now featuring singer Kelly McCracken, kicks off the festival Friday at 1:30 p.m. on the Sawyer Point Stage, while passionate, melodic rockers The Upset Victory (which recently released a great new album, Life Like an Anchor) play Friday at 2 p.m. on the CVG River Stage. Saturday, Cincy Indie Rock foursome Current Events starts the day off at 1:30 p.m. on the Sawyer Point Stage and classic-styled Rock crew Lemon Sky rumbles onto the Southwest Sound Stage at 3:30 p.m. On Sunday, Hamilton, Ohio AltRock band Circle It (a recent winner of The Underground’s Battle of the Bands competition) plays at 2:30 p.m. on the Southwest Sound Stage. For the full Bunbury lineup and more, visit bunburyfestival.com.