Goats, Greens and a Grocery Bike 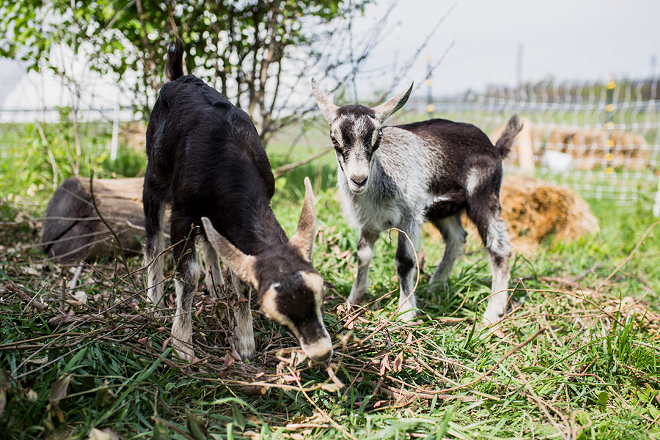 Photo: Hailey Bollinger
Hi, goats! Ambassadors Willow (left) and Rosie are part of the permaculture cycle at CWUF.
Nestled in the industrial belly button of Camp Washington, equidistant from the I-75 on-ramp, River City Correctional Center and everyone’s favorite salt dome, is an unassuming and unexpected oasis: the Camp Washington Urban Farm. Since its inception in 2013, this little two-acre tract of land has been providing sustainably grown produce and agricultural education to neighborhood residents.

Originally a project of the Camp Washington Community Board, executive director Joe Gorman established the nonprofit farm as a way to provide local, fresh produce within the Camp Washington food desert. It’s currently helmed by Samantha White and Kevin Graef, two neophyte homesteaders who are passionately committed to optimizing the productivity of the space despite coming on board only last year.

Under the reinvigorated supervision, the farm is thriving like a mini garden of Eden, but with fewer naked people and more goats.

“It’s the definition of urban farm,” Graef says. “It couldn’t have a better piece of property. I love that (the salt dome and correctional facility) are right next door. I love the challenges they present. I love the backdrop.”

Partners both at CWUF and in life, White and Graef relocated from Michigan three years ago for White’s day job (she’s in automotive lending). Graef fleetingly worked on a squash farm and then “wiggled his way” into Rhinegeist’s packaging team, where he’s still employed. The duo serendipitously met Gorman while living in Over-the-Rhine. He was their neighbor and was impressed by how they transformed their deck and patio into a series of highly harvestable raised garden beds and “the hanging gardens of Babylon,” jokes Graef — so impressed, in fact, that he hired Graef as CWUF’s crop manager.

“He hired me about a year ago,” Graef says before White pipes in.

“I kind of just helped out, and late in the year I jumped on board as partner,” she says.

“A full partner,” Graef adds. “She really took it on and jumped in more than just helping me out here and there.”

It’s evident that White and Graef’s symbiotic relationship mirrors what they’re trying to do with sustainable permaculture; they finish each other’s sentences as naturally as a rain garden gathers water.

Last year, the farm nearly doubled crop production. Graef calculates they had more than 120 tomato plants, 100 pepper plants that ranged from the hottest ghost peppers all the way down to candy-sweet peppers, 60 pounds of garlic, 30 pounds of lettuce, watermelon, onions, heirloom rosemary plants and edible flowers. Restaurants including Mercer OTR and Kaze used them on their menus, but much of the produce was donated to Churches Active in Northside to be distributed to those in need or given directly to those who sought food at the farm. Some went to Madison’s at Findlay Market for sale and some went to a table Graef set up at Rhinegeist like a tiny farmers market.

This year, with White’s infectious enthusiasm, they’ve added peas, beets, carrots, herbs and squash and pumpkins for a you-pick patch in the fall, plus two adorable Alpine goats — Willow and Rosie — and eight types of chickens. Eggs should be available in August and eventually milk from the goats will be transformed into added-value products like ice cream and cheese — “lots of cheese,” says White. They’ve also partnered with Gomez Salsa to provide hundreds of pounds of tomatoes for the restaurant.

Willow and Rosie were CWUF’s first new attractions this year. The goats serve two main purposes: to be conversation starters and as cost-effective lawn mowers to graze and cut down invasive species like honeysuckle. When Willow and Rosie were babies, White was bottle-feeding them up to three times a day and inviting the public — neighborhood kids, volunteers, people at the gas station — to help and learn about the farm.

“It’s a great component for what we’re trying to do here,” Graef says. “Not only to give people nourishment in this community and in neighboring communities but also to teach those people that they can do this for themselves — that this can be duplicated on any scale, larger or smaller.”

“Whether it’s goats or three chickens in your backyard,” White says. “You don’t have to rely on a food system to feed you.”

The goal is to have four-season growing at the farm, which will be accomplished without traditional training. White and Graef are self-taught — two humans you’d definitely want with you in the Apocalypse.

“There’s been a bit of a learning curve, but I’m certainly enjoying the art of research and learning rapidly and as much as you can in a very little amount of time,” White says.

They built the chicken coop and goat barn by hand, and are aiding in the construction of permaculture rain gardens and natural watering systems, and there are photos on social media of White breaking down roosters for meat, a completely newfound skill.

But they don’t do it alone. They view the farm as a public space and welcome any and all volunteer assistance and support.

“Do you want to get your hands dirty? Great,” White says. “Do you want to just sit and snuggle a goat and read a book? Do that, too. I just want it to be a peaceful place for anybody to come anytime you need it.”

The community outreach extends beyond CWUF’s space. They operate the CAMP cart, which is essentially a mobile produce and art cart attached to a tandem bicycle. Constructed by the artist group SlapFace with a bike built by MOBO and SPUN in Northside, the cart idea was initiated and organized by Camp Washington’s Wave Pool gallery, a continuing partner in the operation.* The cart carries fresh produce and crafty activities to educate the community about food awareness. Produce is offered based on monetary donations, “but if you need it, take it,” White says.

“We’re able to bring the food to people,” Graef says of the CAMP cart. “People may not have a car to get to the Kroger on Mitchell or downtown, or maybe you’re just not as mobile as someone else and can’t leave the house, so we’ll ride it around or have one of our volunteers do so if we can’t.”

“We’re changing lives,” he continues. “We’re feeding people and we’re teaching them to feed others.”

The CAMP cart will be in the Northside Fourth of July parade, where the team will be handing out free seeds and plants. To learn more about the CAMP WASHINGTON URBAN FARM, visit cwurbanfarm.org or facebook.com/cwurbanfarm.

*An earlier version of this story failed to mention SlapFace and MOBO as builders of the cart.