Work to gain recognition from the United Nations could secure a better future for the roughly 2,000-year-old sacred sites. 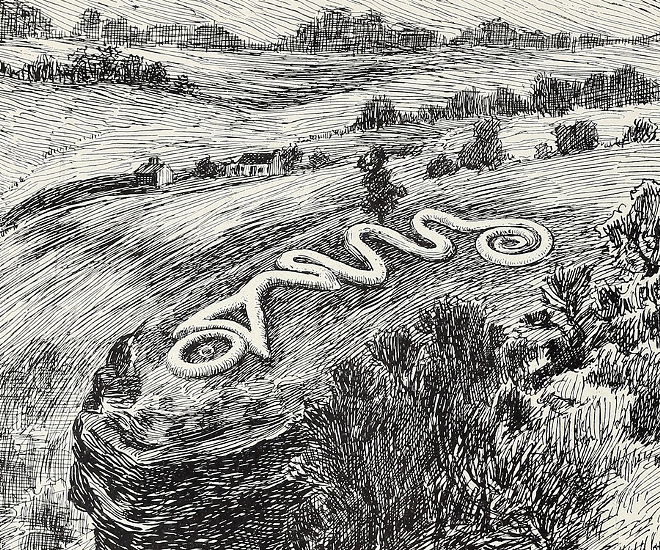 Harpers New Monthly Magazine Volume 104, December 1901-May 1902
In 2011, a Scientology-like group damaged Serpent Mound by burying into the earthwork anumber of “organites” — pieces of quartz and resin — attempting to detect its “life energy.”

Ohio’s ancient earthworks, including nearby Fort Ancient and Serpent Mound, represent incredible achievements by the region’s first peoples, experts say. For centuries, European settlers and their ancestors demolished them, seeing them as nothing more than piles of dirt.

But work to gain recognition from the United Nations could secure a better future for the roughly 2,000-year-old sacred sites.

Professor John Hancock at the Center for the Electronic Reconstruction of Historical and Archeological Sites at the University of Cincinnati is seeking atonement for the disregard and destruction visited upon Ohio’s native earthworks, and he’s asking the world to follow his lead.

According to the Ohio History Connection (formerly the Ohio Historical Society), Hancock was one of the first Ohioans to push for Fort Ancient, Serpent Mound and others to achieve World Heritage Site inscription as designated by the United Nations. Such a designation would both recognize the sites as extraordinary human accomplishments and protect them according to international treaties.

After a decade of work, Hancock, the Ohio History Connection and several other Ohio archeology-related organizations are a year away from submitting an application to the Paris-based UNESCO — the United Nations Educational, Scientific and Cultural Organization — the arm of the UN that decides World Heritage Site status. At the moment, Fort Ancient, Serpent Mound, The Earthworks at Newark and the Hopewell Culture National Historic Park in Chillicothe are on UNESCO’s “U.S. Tentative List.”

“If we get the designation, from the people who have been working to publicize and interpret these places, it will be a culmination of all our careers,” says Hancock, who chairs Ohio’s World Heritage Site steering committee. “For the earthworks to become a World Heritage property it will be the ultimate prize. Because then they are world famous, which they deserve to be.”

What’s more, this could bring to Ohio an extra 200,000 tourists per year, tens of millions in spending and create scores of jobs, according to the Ohio History Connection.

With walled mounds enclosing more than 100 acres, Fort Ancient in Warren County is considered North America’s finest pre-history hilltop enclosure. The popular and enigmatic Serpent Mound in Adams County is an effigy mound — a mound in the shape of an animal — and considered the world’s largest.

It’s likely that international tourists considering Fort Ancient and Serpent Mound would choose Cincinnati as a vacation base because it is a short drive to the small towns where the sites are located, which lack hotels, restaurants, entertainment and more culture.

But increased tourism and their money is just a secondary goal, he says. It’s about recognizing and protecting what many archeologists and historians consider masterpieces of human creative and mathematical genius that are sacred to Native American or indigenous peoples — treasures with a significance the Ohio History Connection says equals that of the Acropolis, the Pyramids of Egypt, Stonehenge and other icons of human culture. The Newark Octagon, for instance, was designed to track the motions of the moon, including its major cycle of 18.6 years, and is theorized to be twice as precise as Stonehenge.

There are more than 1,000 World Heritage Sites across the Earth, but Ohio has none. The application is a complicated process that could span 10 to 15 years before submitting. An application initiated in 2005 will utilize the research and technology of the Center for the Electronic Reconstruction of Historical and Archeological Sites.

Back in the 1990s, a grad student of Hancock’s suggested Ohio’s earthworks could be mapped by software and virtually reconstructed into 3-D animated tours showing what they looked like when they were first built by Native Americans. Because many of the earthworks have deteriorated or been damaged over the last two centuries by farming and modern life, Hancock’s project is built upon archeological data produced by sensing devices, aerial photography and aging frontier maps.

“These visual images allow people to have a strong mental picture of what these ancient monuments looked liked when they were new,” Hancock says.

Like any application, there’s no promise of success, and several years ago the Ohio earthworks inscription was in limbo when Congress ordered the federal government in 2011 to stop paying its annual dues to UNESCO. The U.S. then lost its UNESCO voting rights after not paying its dues for two consecutive years.

The issue’s roots date back to the 1990s when Congress passed legislation denying payment to any agency of the UN if it accepted Palestine as a member. When UNESCO admitted Palestine in 2011 it triggered an automatic shutoff of payments, which has cost UNESCO more than $300 million in U.S. taxpayer funding.

“That was a real question mark when it happened,” Aultman says. “What we have seen since that time is that UNESCO has continued to inscribe World Heritage Sites from the U.S. — the San Antonio Missions in 2015 and Poverty Point, Louisiana in late 2014. All we can go on is what they’ve been doing, and they’re continuing to inscribe U.S. sites.”

Aultman says after the application is submitted next summer, UNESCO-sanctioned reviewers will come visit the sites.

Guy Jones of Dayton is full-blooded Native American of the Hunkpapa Lakota tribe from the Standing Rock reservation in South Dakota, which over the previous year became a flashpoint of protest over the Dakota Access Pipeline. When he came to Ohio in 1981 he says there were close to 27,000 sacred burial sites. Presently there are only 7,600, and his life mission is to preserve and protect what earthworks are left in southwestern Ohio. He has attended several World Heritage Site application meetings.

Jones believes one of the greatest impacts World Heritage Site inscription will have will be UNESCO’s effort to strengthen the earthworks’ connection to Native peoples. He says in recent years too many New Age groups and non-Native peoples have co-opted the sites for their own self-perceived needs and interpretation.

For instance, in 2011 a Scientology-like group called Unite the Collective damaged Serpent Mound by burying into the earthwork a number of “organites” — a piece of quartz and resin molded by a muffin pan. They said they were trying to “reactivate” Serpent Mound to detect its “life energy.”

Jones believes World Heritage Site inscription will have a greater influence on convincing these people, and the world for that matter, to accept the truth — that the Ohio earthworks were built by Native peoples who were forced to abandon them nearly two centuries ago.

“It will open up the doorway for Native peoples to actually participate and be involved not only in the decision making but as to what and how these sites are being preserved and their history,” Jones says. “UNESCO really encourages Native involvement. They really would involve Native people.” ©