If painting is dead, Glenn Brown is carrying on with the corpse 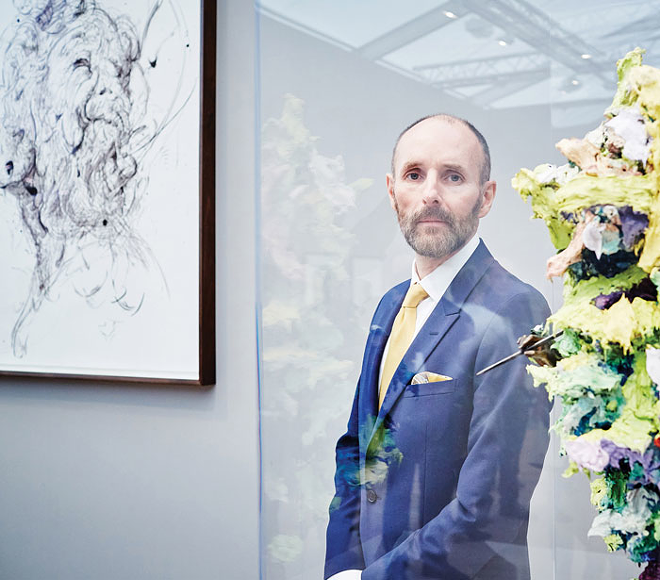 Image courtesy of Gagosian Gallery // Photo: Michael Bowles
Glenn Brown poses by his work at last year’s Frieze London art fair.
The Contemporary Arts Center opened a solo show by British painter Glenn Brown the same day that the Cincinnati Bell Connector debuted just outside its doors. That’s fitting, because both attractions play with the notion of time travel. What happens when we bring something from the past — whether it’s a streetcar or an Old Master — into the present world?

After years of political fighting, it’s too early to conclude whether the Connector is a success. But Brown, who has weathered his own controversy over his use of appropriated images, makes a case for looking back as a way to move ahead.

Ironically, Brown gives fresh life to the Old Masters by making decay a hallmark of his art. With the help of Photoshop, he turns the skin in centuries-old portraits a ghostly green, melts faces and clouds eyeballs. We might breeze by the originals in a museum, but as consumers of pop culture, we can’t turn away from these beautifully grotesque characters that could inhabit a Rococo version of The Walking Dead. And Brown does want us to linger before these paintings in order to better appreciate a supposedly dead art.

Brown, 50, says he’s spent his whole adult life hearing that painting is dead. When he left college in the early 1990s, video and performance art were in vogue. “If painting was really dead,” he told a CAC audience on opening night, “I figured, ‘Let’s see what we can do with the corpse.’ ”

To highlight what he calls “the sexiness of oil paint,” he loves tricks such as trompe l’oeil. “The more games, the longer you look,” he says. Using tiny brushes, Brown meticulously produces swirling yet smooth-as-glass paintings that flatten the original artists’ impasto strokes. The effect is both fascinating and frustrating for a viewer living in the digital age. “Are you looking at a photo or a strange print?” he asks during a walk-through of the exhibit.

Conversely, his sculptures — or “3-D paintings,” as he refers to them — are thick with layers of oil paint that resemble gobs of taffy. Working on panels up to 6-and-a-half-by-10-and-a-half feet, Brown produces only a few paintings annually. Because of drying times, a sculpture might take two years.

The New York Times last month reported that auction prices for pre-1800 works are falling as bidders favor Contemporary art. But Brown, whose paintings have sold for more than $8 million, says he isn’t consciously trying to make the Old Masters relevant to today’s buyers. Nor does he want to skewer their work as he mixes elements of high and low art. On the contrary, Brown reveres his predecessors and their skillful brushstrokes. Their medium — paint — is his message, with some contemporary social commentary thrown in.

“I love the Old Masters,” Brown says. “Viewing them is as close as we can get to traveling to the 18th and 19th centuries.”

Working with images that he’s scanned from art history books or found online, Brown changes original colors, backgrounds and positions in order to showcase figures in ways that represent the cultural climate of the late-20th and early-21st centuries.

“What would they think of us?” Brown asks before passing by “In My Time of Dying,” his spooky chartreuse version of Bernardo Strozzi’s “St. Jerome Meditating over the Bible,” a work from the 17th century. “Are we less in touch with nature? Have we lost a sense of humanity?”

“The Great Queen Spider” is a headless, upside-down mashup of a range of sources: Diego Velázquez’s 17th-century portrait of Pope Innocent X, Francis Bacon’s 1953 appropriation of the same piece, Pablo Picasso’s Blue Period and a 2002 episode of South Park that imagines a giant arachnid controlling the Catholic Church. Yes, dark comedy is another artistic trick.

“I was brought up on Monty Python,” Brown says. “It feels normal to communicate that way. Am I sincere or ironic?”

This exhibition of more than 30 works is Brown’s first solo U.S. show and comes here after debuting in Des Moines, Iowa. A survey of his past two decades, it includes a trio of sci-fi scenes that Brown painted in the mid-1990s. These pieces lack the stormy brushstrokes of Brown’s more recent paintings and they feel out of place amid the works that reference Old Masters. But at the same time, it’s easy to imagine some of Brown’s amorphous, alien-like beings leaving Earth to inhabit these desolate places.

“Is our world getting better or worse?” Brown asks. “Do we need religion? Is science fiction a new kind of religion?”

While Brown raises questions with his work, questions have also been raised about his work. Following some legal action, Brown’s sci-fi titles now acknowledge that his slightly tweaked images were copied from book illustrators Chris Foss, Anthony Roberts and others. Not surprisingly, Brown truly transforms the source material for his later works.

With some humility, Brown presents himself as one of a very long line of artists appropriating the works of others. The practice starts in art school.

“We only achieve something great when we stand on the shoulders of those who have gone before,” he says. “I use a computer to make up for lacking in my abilities.”

One of his sculptures, “The Glory of Spain,” appears to capture the artistic struggle to reconcile past and present. A 19th-century bronze statue of a young man shoulders an abstract, multicolored plume of paint. The cloud wraps around his neck, yet he’s remaining steady. In fact, what appears to be a grimace on his face might actually be a smile.

“The contemporary and historical clash and fight -- maybe wrestle is a better word,” Brown says. “And they’re both enjoying it.”