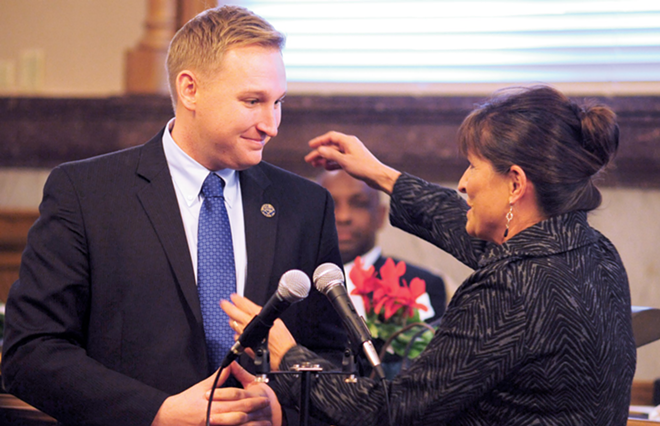 n an effort to help attract the brightest young professionals to Cincinnati, a city councilman is proposing that domestic partners of city employees be granted health insurance benefits.

Seelbach, who is Cincinnati’s first openly gay council member, believes that the domestic partners of all municipal employees — straight or gay — should be given the same health insurance benefits as the spouses of married municipal employees.

“We are asking the city’s administration to research the best way to implement equal partner benefits for all city employees,” Seelbach says. “This would include all lesbian, gay, bisexual transgender (LGBT) and heterosexual employees’ partners.”

While married employees’ spouses are offered health insurance benefits from the city, domestic partners who co-habitate with city employees are not.

Many cities in Ohio and nationwide, however, are recognizing domestic partnerships and have enacted ordinances granting them the same rights as their married counterparts. Last year both Cleveland and Columbus passed ordinances giving city employees’ partners health insurance benefits.

Elected in November, Seelbach vowed to introduce the issue within his first 100 days in office.

“On general principle of equality and justice, it is just the right thing to do because all people deserve the same benefits,” Seelbach says. “On the business side, it is what we need to do to make Cincinnati as competitive as possible with other cities and corporations. If we offer the best person a job, they may say no and go somewhere that offers these benefits.”

Cities like Ann Arbor, Mich., and Louisville, Ky., as well as states like Oregon and California, grant full health insurance benefits to the domestic partners of state and government employees.

Several other nations — such as Australia, Croatia, Argentina and Portugal — have similar health insurance benefits for domestic partners.

“This really is just a matter of playing catch up on what is fair and works,” says Scott Knox, a local attorney who specializes in LGBT issues and is a board member of Equality Cincinnati. “We have fallen behind other cities, as well as industries and the business community.”

Advocates note many companies have changed their benefits to stay competitive with other corporations.

“Over half of the Fortune 500 companies offer health insurance benefits to their employees’ domestic partners,” Knox adds. “Some companies that do this include Fifth Third Bank and Procter and Gamble.”

Regarding how much this will cost City Hall and how many employees would be affected, Seelbach says it is too soon to know.

In Columbus, city employees’ partners must be at least 18 years old, been in relationship with the city employee for at least six months, plan to stay in the relationship for the foreseeable future, be mentally competent and have their finances intertwined.

When asked if there is a concern that people may try to defraud the system, both Seelbach and Knox were confident that wouldn’t occur.

“I do not think people would want to risk their jobs in order to help someone else get health insurance,” Knox says. “Also, because there is a bias or stigma with being gay, people tend to not act like they are if they are not. Plus, people talk in the workplace, so it would be pretty clear to co-workers if someone was not in a legitimate relationship.”

But Seelbach didn’t mince words about a potential cost increase.

“The additional costs would come from our general operating budget,” Seelbach says. “This is a issue of equality and this should never be an issue of cost. We will have to find the money for this, if that means cutting other programs, that is something we will have to do.”

Critics argue that if the ordinance were passed, it would be a violation of the state’s 2004 Marriage Amendment. That year, Ohio voters approved a constitutional amendment that banned same-sex couples from marrying, as well as legal recognition for other types of same-sex unions.

CityBeat’s telephone calls and emails to both Phil Burress and David Miller from Citizens for Community Values (CCV) weren’t returned by press time. (Miller is also chief of staff for Cincinnati City Councilman Charlie Winburn and has an office just a few doors away from Seelbach’s.)

Burress, CCV’s president, has said he doesn’t understand “why homosexuality — which is a behavior — is such a big priority with some people,” according to comments he gave to The Cincinnati Enquirer.

Burress vowed to fight this in court if it is passed. “I don’t want another fight with the city of Cincinnati,” he said. “But they’re begging for it and we’ll give it to them,” according to The Enquirer.

“Besides the comments from Citizens for Community Values, we have had overwhelming support for this,” Seelbach says.

The item is expected to be on City Council’s agenda for this week, and could be decided shortly.

“This is just the right thing to do for our hard-working employees,” Seelbach says. “No one should go without health care and you should not judge a person based on who they love. Let’s move past this and talk about real issues like the economy and our school systems.” ©