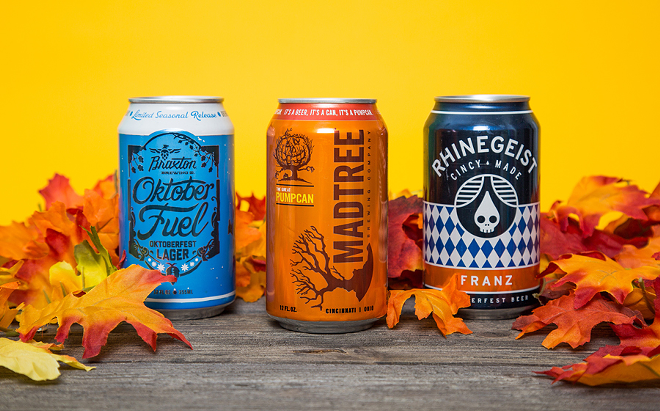 Photo: Hailey Bollinger
Fall in a can

It’s Oktoberfest Zinzinnati this weekend — the nation’s largest Oktoberfest celebration — and local fall beers started hitting the shelves in August. After asking a swath of breweries what to expect beer-wise this fall, it’s clear there are some amazing pumpkin brews (made with real pumpkin), Oktoberfest lagers and innovative barrel-aged fare on the horizon.

Bad Tom – On Oct. 13, Bad Tom will release Bad Luck, a coffee porter made with Peg Leg Jim beans from Anderson’s Luckman Coffee. During the evening, they’ll have a pig roast to complement the beer.

Braxton Brewing Co. – After halting production in order to can water to send to areas affected by Hurricane Harvey, Braxton is back. Their October Fuel, released in cans last month, is an authentic German lager that uses a method called “decoction” to boil a portion of the beer’s mash, resulting in a rich malt complexity. They’ll also be debuting a new secret collaboration with Graeter’s at their Oktoberfest booth this weekend: a Braxton ice cream.

Brink Brewing Co. – The College Hill microbrewery’s head brewer teamed up with Northside’s Higher Gravity for a yet-untitled wet-hopped beer using hops from Ripley, Ohio farm Levanna Heights. The beer will be available at the end of September. They’re also working on an Oktoberfest, which should be pouring by mid-October.

Darkness Brewing – Leave it to a brewery named Darkness to release a black pumpkin ale. Named Blumpkin, the beer is brewed with real pumpkin and pumpkin pie spices from Colonel De; it will hit distribution before All Hallows’ Eve.

Fibonacci – On Oct. 4., the brewery will release Pepo, a pumpkin porter named after cucurbita pepo, the scientific name for a field pumpkin. They’re also bringing back their popular Taps & Tarot event, featuring tarot card readings at the brewery every Friday night in October.

FigLeaf Brewing Company – On Oct. 14, the Middletown brewery celebrates one-year in business with a party. They’ll have 18 taps with current beers and a collaboration brew with Liberty Center’s FlipSide burger. That beer is named F2 and is a hoppy amber ale.

Listermann Brewing Co. – On Thursday, the brewery kicks off Oktoberfest with a party featuring live music, cheap wings from Renegade Grille and $4 pours of their new Fest Bier, a drinkable German lager with a smooth malty character and slight bitterness.

MadTree – On Sept. 21, MadTree will release cans of Pilgrim, a pale ale brewed with cranberries, walnuts, vanilla beans and pilgrim hops, previously available only on draft. It’s also time for the return of the Great Pumpcan, a seasonal spiced ale with 7.9 percent ABV available in six-packs and on draft. Unbeetable Cornclusion is a new beer brewed with beets, corn and honey from Carriage House Farm. It’ll debut at the Cincinnati Food + Wine Classic on Sept. 22.

Mash Cult – The guys from the experimental nanobrewery, who once named a pumpkin latte ale “White Girl,” will soon bring back Debbie, an oatmeal-cream-pie brown ale brewed with lactose sugar, oats, cinnamon, vanilla bean and brown sugar — just like a Little Debbie cookie.

Municipal Brew Works – On Sept. 22, the Hamilton-based brewery will release 1791 Oktoberfest, which alludes to the city’s founding.

The Queen City Brewery of Cincinnati – This week they’ll release Zinzinnati Oktoberfest. And in October comes the release of The Queen City Pumpkin Ale.

Rhinegeist — The brewery recently hosted their annual Frankztoberfest party to commemorate the release of Franz, a seasonal Oktoberfest made with pale ale, Munich, Vienna and Caramunich malts, which they describe as “not traditional but über German.”

Streetside Brewery – On Sept. 30, Streetside commemorates its first anniversary with a party featuring food trucks, live music and the debut of Demogorgon, a brew named after that pesky villain from season one of Stranger Things. (Season 2 hits Netflix on Oct. 27; for more fall TV, see page 43.). The stout beer was barrel aged in Heaven Hill distillery barrels and will be released on draft and in bottles. Clocking it at 13.1 percent ABV, the beer is strong, like its namesake. This isn’t the brewery’s first foray into Stranger Things beer: Last year they released 011(El), a pale ale.

Taft’s Ale House – The “anti-pumpkin” autumn brown ale Gourd to Death returns at the end of the month. Brewed with toasted pepitas, maple syrup, brown sugar and chicory root, it’ll be on tap at their OTR location and at their new Brewpourium location in Spring Grove Village, which has a grand opening this weekend. (See To Do on page 36.)

Urban Artifact – Urban Artifact collaborated with Sam Adams for a special beer. Tricorne, a tart New England IPA brewed with local pawpaw fruit, debuts at Oktoberfest Zinzinnati and the Ohio Pawpaw Festival. Named after a hat worn during the Revolutionary War and its resemblance to the pawpaw flower, the beer is juicy with tropical notes. Urban’s seasonal Chariot, a cherry-pie gose, will be released next week.

The Woodburn Brewery – On Sept. 1, the brewery tapped Han Solo: The Great Pumpkin. The blonde ale is infused with pumpkin spices and coffee. Coming Sept. 20, they’re upping the pumpkin game with an 8.5 percent ABV Imperial Pumpkin harvest ale. It’s made with six pounds of pumpkin per barrel, Colonel De pumpkin spices and lactose to give it a slight sweetness. Woodburn’s head brewer, Chris Mitchell, modeled it after his family’s pumpkin pie recipe. ©