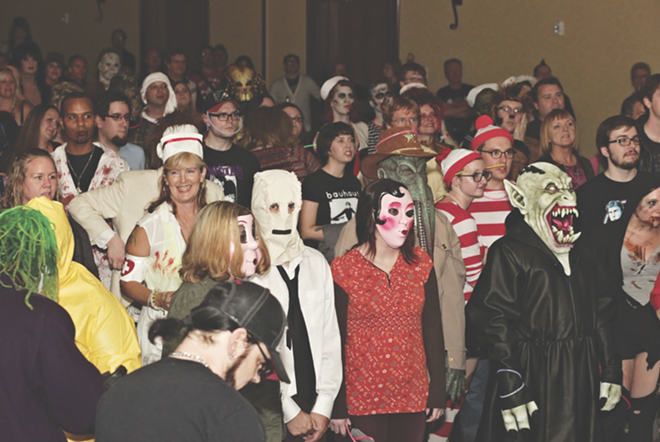 nce a year Cincinnati likes to let the freaks out — but we’re not talking about Halloween. After a 16-month absence, HorrorHound Weekend descends onto Sharonville promising vis-à-vis celebrity encounters, film screenings, burlesque performances and horror author signings. Put on your best Michael Myers mask and be prepared to meet your worst nightmare.

Cincinnati’s known for a lot of things, but now the city can add “horror cognoscenti” to its resume. Our city is home to HorrorHound Magazine and its spawn, a horror convention called HorrorHound Weekend, which is sponsored by local publishing house Samhain Publishing.

Samhain was founded in 2005 as a publisher of romance novels and e-books, but in 2011 they formed their horror imprint under the tutelage of newly acquired Executive Editor Don D’Auria, who had overseen Dorchester Publishing’s horror line, Leisure Books. The last Cincinnati HorrorHound festival unfolded in November of 2011 and was the first one that Samhain sponsored, a match made in horror heaven.

“With [D’Auria], we actually began getting some wonderful authors in

… and almost immediately we began to reach out to organizations like HorrorHound so that we could get the word out that Samhain was open for business for horror,” Jenn Stark, Samhain’s publicist, explains. “And then HorrorHound was a wonderful fit because not only was it definitely in the genre we were looking for but it was located here in Cincinnati.”

As a sponsor, Samhain has a booth where a few of their published authors sign their horror novels. “A lot of it is to build awareness for the authors themselves and their works,” Stark says about the partnership. What distinguishes Samhain from other publishing houses is they release their books within a few months to a year of acquiring the manuscript, unlike larger houses which can take up to a couple of years. They also publish the e-book along with the print copy and, surprisingly, their readers prefer to read horror in print instead of using an e-reader.

“It’s still a niche that we are developing, deepening,” Stark says. “We’re always looking to get new authors and new voices.”

At HorrorHound Weekend, regional authors like Cleveland’s David Searls and West Lafayette’, Ind.’s Jonathan Janz will be on-site to sign their Samhain-published books, but it’s Naperville, Ill., novelist John Everson who’s aiding Samhain’s accretion with his Bram Stoker Award nomination. The award is like the Oscars of the horror world (Stephen King and George R.R. Martin have won). Everson is nominated for Superior Achievement in a Novel for his book NightWhere, and he’ll be representing Samhain this June at New Orleans’ World Horror Convention, where the awards will be announced.

Northside resident Nathan Hanneman not only runs the HorrorHound convention, but he is the editor of HorrorHound Magazine, a bi-monthly publication encompassing everything horror. Since the con’s 2009 arrival in Cincy, it’s grown in size so much it has moved from Crowne Plaza to the commodious Sharonville Convention Center.

“With the attendance increase, our magazine subscription base grows — they feed into each other in a great way,” Hanneman says. “The funniest thing is there are still a lot of people coming to HorrorHound Weekend who don’t even know we are a magazine first!”

The bi-annual con debuted 2007 in Indianapolis and this weekend marks the 15th HorrorHound Weekend and the fourth in Cincinnati; typically Indianapolis has the larger fanbase of the two cities, but this weekend looks to surpass that.

“Based on our sales for this event, we have set a new bar for attendance, cementing Cincinnati as the place to be,” Hanneman says. “We still have our Indy events, but it will be hard to top the impact this March 2013 show is going to make. I think a lot of people will be talking about this event for years to come. We are very excited!”

Hanneman has a right to be eager, considering this year has the biggest lineup yet: a few cast members from the zombie-hit The Walking Dead; horror maestro John Carpenter; Diane Franklin from ’80s cult films Better Off Dead and TerrorVision; Eddie Munster himself, Butch Patrick; and Terminator 2 villain Robert Patrick. Unfortunately, sometimes guests have to cancel — Virginia Madsen, Karen Black and Michael Parks dropped out — but this is always expected.

“Last time we were in Cincinnati, a few Walking Dead actors couldn’t make it last second because filming on the Season Two finale was switched to nights. The trick is learning when to take risks,” Hanneman says. “After the 2011 debacle, we decided to stay away from Walking Dead guests during filming [May-November].”

Horror conventions used to be a graveyard — so to speak — for the long-forgotten horror celebrity, but not anymore.

“There is a great level of appreciation for the convention circuit in recent years,” Hanneman says. “Any time a big horror film comes out — a new Chainsaw Massacre or Friday the 13th — and you see all of the fresh names hitting the local conventions. It actually becomes more rare to find classic names such as Michael Berryman (The Hills Have Eyes) or Ricou Browning (Creature from the Black Lagoon) at these shows. We try to juggle a perfect mixture of classic, modern, cult and crazy.”

For Indy’s HorrorHound Weekend last November, Hanneman scored his “Moby Dick”: Scream Queen Jamie Lee Curtis, who never makes appearances at cons but was enticed by charity and raised $175,000 for Children’s Hospital Los Angeles from her appearance. Curtis was a triumph for Hanneman, but other actors like Bill Paxton and Christopher Walken elude him.

“We just tried to get Neve Campbell and I thought it was going to happen … but alas.”

HorrorHound Weekend will return to Cincy again in March 2014, something that Hanneman and staff have already started planning. A scheduling conflict was the reason there wasn’t a Cincy HorrorHound Weekend 2012 (Columbus filled in), but as the maxim goes, “absence makes the heart grow fonder.”

“Stay out of Cincinnati for an entire year and come back bigger than ever …” Hanneman says. “It upset many to see us gone for so long, but it seemed to have worked.”