The Epicurean Mercantile Company is an urban gourmet grocery store that sells everything from Dawn dish soap and Tylenol to vegan Toona and flavored marshmallows. 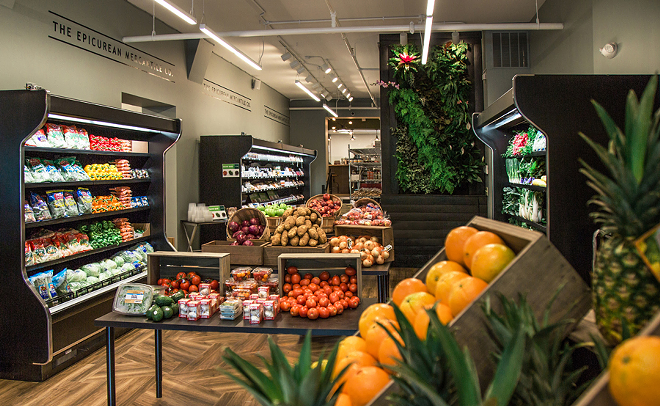 Photo: Hailey Bollinger
Findlay’s new EMC grocer blends gourmet goods with practicality.
New York City has Dean & DeLuca, St. Louis has Straub’s and now Cincinnati has EMC — aka the Epicurean Mercantile Company — an urban gourmet grocery store that is both practical and beautiful enough to be called glamorous. Depending on your preferences and priorities, that may not matter much, but that’s where the practicality comes in.

Sitting adjacent to Findlay Market, EMC fills a gap. You’ll find vegan Toona next to Vienna Sausages. There are small-batch, flavored marshmallows and an olive bar and there’s Dawn dish soap and Tylenol. There’s shelf-stable duck fat and Reynolds Wrap. And with a basement, a sub-basement and a sub-sub-basement (both previously used for brewing), EMC’s physical space fits in perfectly with Cincinnati’s treasured past and the history of Findlay Market itself.

Since Trombly and Snowden have been so in tune with the customers at Fresh Table and the ebb and flow of Findlay, they soon started hearing complaints about the overall experience. Customers wanted a one-stop shop. They wanted to come to OTR, buy their farmers market produce, their Eckerlin Meats and their toilet paper and head home with the week’s shopping complete. EMC answers that call 8 a.m.-8 p.m. daily.

“It’s a 5,000-square-foot urban grocery store that encourages discovery with every shopping trip,” Trombly says. “The four different rooms of EMC (once four separate stores) encourage the shopper to investigate the space and it will make for a more gratifying shopping experience.”

Some of that shopping experience comes in the form of what Trombly calls “hooks.” They’re add-ons that don’t necessarily mean better food or better prices but, rather, more satisfaction on the whole. For instance, 8-foot-tall living walls from Urban Blooms have been designed and installed, including an herb wall inside the 1,000-square-foot restaurant in the back of the building called The Counter. There’s also a “hydration station” with a tall mounted faucet to fill a large water bottle — or you can buy one of the water bottles hanging next to the station.

Trombly really wants the emphasis to be on urban shopping. “We’ve hired most of our staff from the OTR neighborhood,” she says. And everything in the store is set up to support the concept of smaller shopping trips more frequently.

How does this translate to layout? Well, for starters, there are only two checkout lanes, and the groceries are registered on iPads. There’s a third “mobile unit” for the busiest hours when someone has a few items that can be rung up fast. There are also many more small grocery carts than big ones, and since the carts aren’t allowed outside the interior of the store, it makes sense. Carrying a full load would be difficult, especially if you’re taking the streetcar, conveniently stationed right outside the building.

Another part of the concept is the grocery shelves. They mostly consist of wheeled units with thick wire shelving that Trombly intends to move at her discretion. She doesn’t want things to stay the same inside the store. Customer preference will also ultimately decide what’s chosen to fit inside the coveted four-door freezer. For now, there’s ice cream, pizza, vegetables, frozen fruit and a selection of veggie burgers.

The other big draw of EMC is The Counter café. Food will be made to order and seating is varied. There are three big communal tables and bar seats available, plus an outside bistro area. The menu is written on big sheets of paper with iPads to order underneath, and the production space is open to the dining area with a partial glass wall.

Although Trombly and Snowden plan to keep the offerings separate from their success at Fresh Table, one can only imagine The Counter will be seeing rave reviews when the food starts rolling out.