The musical, about the bumpy road to stardom for an African-American female singing group, recalls the stories of The Supremes and The Shirelle 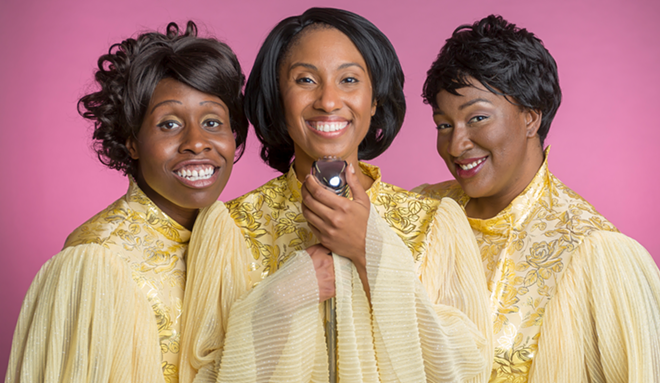 The musical Dreamgirls has a storied history: A Broadway hit in 1981 (winning six Tony Awards) and a major motion picture in 2006 (nominated for eight Academy Awards), it’s the story of three African-American female singers from the 1960s starting out as “The Dreamettes” in Chicago, finding their way to New York’s Apollo Theatre and then to national stardom. When they become “The Dreams,” their stories resemble Pop stars such as The Supremes and The Shirelles; other characters reflect Soul singers James Brown and Jackie Wilson.

Staged on Broadway by Michael Bennett, best known for A Chorus Line (1975), it was the director/choreographer’s final production. (He was a victim of AIDS, dying in 1987 at age 44.) Given reputation and skills, it’s no surprise that the show is both ambitious and full of physical movement. With music by Henry Krieger and lyrics by Tom Eyen, Dreamgirls is mostly sung and danced, with little spoken dialogue — most of the dramatic action is conveyed through sung numbers. That means it’s a demanding show to recreate, especially for a theater with the physical limitations of The Carnegie in Covington, where it’s currently onstage.

Such challenges have not been an impediment to Torie Wiggins, a veteran local actor and director, who assembled a remarkable cast of African-American talent: The story involves eight well-defined characters, requiring performers that can sing, act and dance. Wiggins recruited another local theater professional, Darnell Pierre Benjamin, to choreograph the show, which seldom employs blackouts for scene changes, but rather flows cinematically from one moment to the next, sometimes juxtaposing backstage and onstage moments simultaneously.

Wiggins’ cast features three fine singers as The Dreams: Sharisse Vernelle Santos is Deena Jones, who becomes the group’s lead singer; Lormarev Jones is Lorell Robinson, the group’s peace-making back-up singer; and Tia Seay (a powerhouse singer imported from Dayton) takes on the daunting role of Effie White, the lead singer who is rudely supplanted and who sings several of the show’s star-making numbers, especially the iconic heartbreak song, “(And I Am Telling You) I’m Not Going,” as well as the second-act comeback number, “I Am Changing.” Seay’s performance all but stopped the show both times.

Brandon Burton is Curtis Taylor Jr., the hard-driving and often manipulative manager of the group. He covertly romances Deena while leading Effie on (and fathering a child with her), all in his pursuit of his own dream, a more broadly appealing direction for Pop music. Along the way he intersects with and reshapes James “Thunder” Early, played with exceptional energy and presence by Dedrick Weathersby of San Francisco, whose star turn is initially backed by the Dreamettes but eventually spirals down to a manic — yet constantly watchable — washout performer.

Reginald Hemphill plays C.C. White, Effie’s good-natured songwriting brother, and Ernaisja Curry is Michelle Morris, the back-up singer Curtis brings in for the thankless task of replacing Effie when she becomes too difficult to manage. As Marty, James’ conservative manager and the persistent guy who helps Effie restore her career, Javon Cameron (from Dayton), brings solid support to several scenes.

These capable regional performers are repeatedly assembled in scenes featuring three to six of them in unison; they are constantly augmented by a hardworking 10-member ensemble in numerous small roles (especially as dancers).

Truth to tell, there’s a lot going on in Dreamgirls, and it takes awhile to sort out the characters, discerning the good guys from the troublemakers. In fact, just like in life, those designations aren’t fixed in this story: No one is all good or all bad. That keeps the show exciting and thoroughly entertaining.