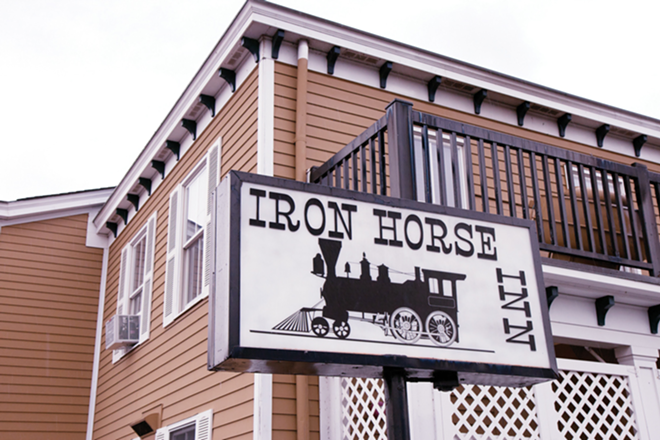 t the Iron Horse Inn in Glendale, there’s a new sheriff in town. His name is Chef Ernesto Luna, and he’s shaking things up a bit with a seasonal menu. As you dine at the Iron Horse, you’ll hear trains in the near distance and have a pretty good meal.

The façade of the building has a southern flair, and inside offers two distinct dining environments (both with the same menu). We were downstairs in the more formal dining area, but upstairs guests enjoy the bar; an art deco space with live music for a much more laid-back feel.

Our meal got off to a rocky start, as it took some time for our server to take our drink order, and once the order was placed, we were told they were out of many of the beers on their list. Also, there was confusion over the menu. One of our dinner menus was different than the other three, and it took the manager a while to figure out which version was correct.

We were told that the new seasonal menu was just days away, so we were ordering from the summer menu. Hummus ($7), Lump Crab Cakes ($10) and Peruvian Ceviche, a combination of shrimp, calamari, local tomatoes, leche de tigre (a citrus marinade) and sliced avocado were a few options, but we settled on the Fresh Rhode Island Calamari ($9), Arancini ($8) and Bruschetta ($7).

The calamari was some of the best I’ve had: lightly battered and delicate with orange aioli adding a creamy, citrus freshness. The arancini, which are fried balls of rice and beef, were so-so. The rice was formed around beef and mozzarella, then breaded and fried. They were a bit bland and the meat was sparse. The bruschetta was simple, as most are, and a perfect few bites. The best part of the dish was the homemade focaccia and a smattering of thick, rich balsamic vinegar. Literally finger lickin’ good.

You can dine on the cheap at the Iron Horse with the sandwich and pizza options, but we wanted entrées. Shrimp and Grits ($16), Portuguese Trout ($18) and Coq Au Vin with Cornish game hen and a cabernet reduction piqued some interest at the table, but it was the Osso Buco ($26), a slowly cooked veal shank, the Organic Scottish Salmon ($22), the Filet Mignon ($28) and the seafood special of fresh pasta, mussels, shrimp and white fish in a spicy tomato sauce ($20) that won out. There are hand-cut French fries offered as a side item ($6), and since fries are my favorite food, they were added; I pretended that they were for “the table.”

We had a deliciously sweet and spicy Rocket Salad ($6) with arugula, candied walnuts, manchego cheese, blueberries, pears and that same balsamic cane emulsion dressing found on the bruschetta. Having forgotten our shaky start, we were enjoying the energy of the busy dining room and paid a visit to the lively upstairs dining area to hear some live music.

There were hits and misses with the entrées. The biggest hit was the seafood special. The pasta was soft and silky, and the mussels, fish and shrimp were tender and perfectly cooked. The fresh pasta and delicate seafood, combined with the slightly spicy, light tomato sauce, tasted very authentic, which makes sense as the Chef is Italian. The Osso Buco was in the midrange as successes went.

The veal shank was rich and tender from the low and slow braising, and the small mound of risotto resting beneath it absorbed all the juices. But, and this might be a personal preference, it seemed one-note. There was a lot of meat and nothing to really contrast it. The Filet Mignon, a 6-ounce cut of Wagyu beef with a rich bordelaise sauce made of wine, butter, shallots and bone marrow, was “nothing to write home about,” commented my guest.

But the Organic Scottish Salmon proved most problematic. The menu promised a Kentucky bourbon glaze, basmati rice primavera and baby bok choy. What the menu did not mention was that the basmati rice primavera is swimming in soy sauce. There isn’t much worse than a menu that leaves off critical elements. Aside from the terribly salty rice, the fish sitting atop it was fresh tasting, flaky and nicely medium rare, though I ate most of my friend’s seafood pasta special and crushed the thick and salty French fries.

A restaurant remains in business for decades for one reason: people like it. While the meal at the Iron Horse won’t make my best of 2011, it was certainly far from the worst. ©