Honor the National Anthem by Playing It Less

If we truly do revere the anthem, why don’t we make it truly special and perform it only on national holidays or at championship games? 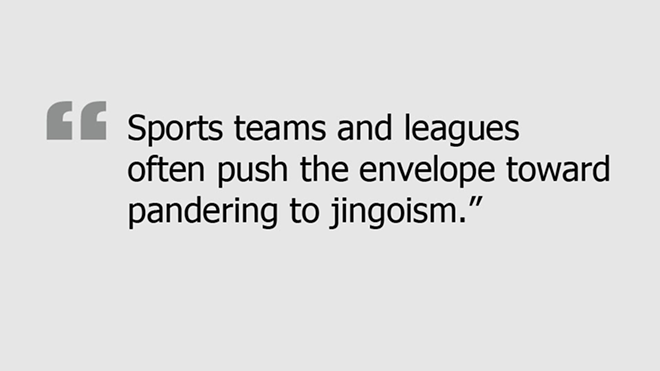 Now that National Football League players (and even some owners) have rebuked Donald Trump and other hardline conservatives, establishing by the sheer force of numbers their right to dignified protest during the national anthem, let’s move to another anthem-related issue.

Why, for anyone’s sake, do we choose to perform the anthem at every U.S. sports event above the high school level, and even many at that level?

Let me start this discussion by recapping a behind-the-scenes incident from my time as public relations director for the Bengals: It was 10 or so years ago at Paul Brown Stadium, long before Colin Kaepernick or any other NFL player thought of kneeling during the anthem. But at anthem time on this Sunday, the FOX TV producer working the game was livid.

“Goddammit, your anthem is running long!” he screamed to me by phone from the production truck. “You gotta speed this up! We’re on the air at exactly 1:00:30, and if we have to open and that anthem is not finished, you guys are going to be hearing from us next week!"

A hurried call to our team’s “gameday presentation” staff reached only a voicemail, and it was pointless anyway. It was too late to affect the course of events. As for the cause of this horrid situation? Possibly the anthem had started late, due to a previous element in the meticulously tight “Pregame Time Format” running too long. Or perhaps the singer was just not well-disciplined and hadn’t held to the rehearsal time. Maybe it was partly my fault, for not properly ensuring full mid-week communication between the producer and the gameday people.

Either way, a TV disaster loomed, and I was powerless to do anything but watch and listen as Francis Scott Key’s words and music played out on the field…

Then sighs of relief, as the singer put a wrap on it just in the nick of time. The producer had overreacted. But though it was ultimately a non-issue, it sticks in my mind to this day how angry and frantic the producer became when he thought his NFL game was going to open with The Star-Spangled Banner.

Yes indeed, the same TV networks that join sports leagues in so reveling in the anthem on special occasions consider it a loser most of the time. When protests aren’t dominating the news, garden-variety anthem presentations at the vast bulk of games (and not just football) are something to be scrupulously avoided for the TV audience. It’s considered dead air, two minutes and 30-odd seconds of something very few really care about. It’s boring, OK?

And that one close call at PBS helps me realize how much better it would be if we rejected the conservative political correctness that says the anthem MUST be played before every friggin’ game on everybody’s schedule.

If you don’t go to ballgames — if plays or concerts or something else non-sports is your thing — you rarely or never encounter the anthem. It’s just not on the program, and no one thinks a thing of it. It’s a sports thing to perform it every time. And if you go to a lot of sports events, you know what anthem time can be like.

Some people deftly manage to be in a concourse, outside the area where custom demands their attention. They can efficiently use the dead time in a conversation or a concession line. As for those still in the stands, some pay reverent attention, but others just look like zombies and still others are staring at their phones or whispering to their neighbors.

So if we truly do revere the anthem, why don’t we make it truly special and perform it only on national holidays or at championship games? Why do we submit it to quiet disrespect by playing it before every mundane and less-than-consequential contest?

Do it enough relatively meaningless times, and by sheer force of chance and numbers it can even get ugly. As an Enquirer reporter covering the Reds in 1990, I was made to witness in person the arguably Worst Anthem Ever, the Roseanne Barr one at a San Diego Padres game when she spit, grabbed her crotch and sang just horribly. I’ve never really figured out what the hell her deal was with that, but it was quite a mess.

Really, though, we know why the anthem is singularly attached to sports. Much as many of us liberals enjoy them, sports at their genetic core are tied up with hardline conservative “values.” They mostly feature patriarchal authority figures enforcing strict codes of discipline, and they prize muscle and aggressiveness over intellect and empathy. And what’s more conservative and traditional than the way we present the anthem?

Hey, I get it that sports are kind of inherently conservative. Teams need strict regimens to perform well. You can’t stop practice every 20 minutes to make sure no one is feeling tired, or stifled in the area of their personal expression. And it’s OK that even with kids, one side has to “lose."

But it’s still a shame that the “Love It or Leave It” segment has managed to exercise such philosophical control over the anthem, and particularly at sports events. I see it as in large part as a feel-good exercise for people who don’t really “Support Our Troops” in any meaningful way. (After they cheer, some go vote down levies for mental and physical rehab services.) And sports teams and leagues often push the envelope toward pandering to jingoism (defined by Webster as “extreme chauvinism or nationalism, marked especially by a belligerent foreign policy.”)

So in addition to saving the anthem for truly meaningful times, how about we occasionally link it with something great about America besides soldiers and flyover warplanes? Yes, our military personnel are worthy of our great respect and gratitude, but honoring some marching Peace Corps workers might be nice for a change.

And instead of making the auxiliary song be Lee Greenwood’s “God Bless the USA” — which glorifies war and implies there’s no need to change a thing in this country — imagine backing up the anthem with Lennon’s “Imagine,” which says that maybe our highest ideals should include striving for a bit more justice and equality.

Prior to the last couple weeks, I didn’t think there was a chance in hell we could actually come to honoring the anthem more by playing it less. There seemed no way that the hard right wing could be stopped from ferocious pushback in such a case, and the teams and their leagues weren’t about to risk that.

But now, ironically, the players’ spirited defense of their right to protest might cause the right to rethink its stand. If the anthem is played fewer times, after all, it means fewer chances for it to be used as a vehicle for the statements those puffed-up “patriots” just hate.

And maybe the protests, however legitimate, would move on to another platform. And then the national anthem would finally be where it should be on the scene of American sports.