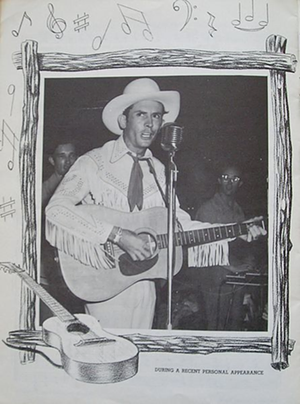 Well, I’m in love, I’m in love, with a beautiful gal
But she don’t care about me
Lawd, I tried and I tried, to keep her satisfied
But she just wouldn’t stay
So now that she is lea-eav-in’
This is all I can say...
I got the lovesick blues


It was a quirky arrangement of a 20-year-old Tin Pan Alley song. It had no bridge. The first verse was used as a chorus; the original chorus became the first verse. There were weird chord changes along with falsetto and yodeling vocals.

A session player thought Hank Williams had lost his mind. “You ain’t gonna release that are you, Hank?”

Release it he did. “Lovesick Blues” became the most important song in Hank Williams’ career and one of the most influential singles in Country and Pop music history.

And it was recorded in downtown Cincinnati on Dec. 22, 1948, at E.T. Herzog Recording Company, on the second floor of 811 Race St. In all, the “father of contemporary Country music” would record eight songs at two sessions at the Herzog studio, including “My Bucket’s Got a Hole in It” and “I’m So Lonesome I Could Cry.”

Yes, before Nashville had Music Row — and even before legendary King Records made its mark — Cincinnati had Herzog on Race.

“It’s a lost history of Cincinnati,” says Brian Powers, music archivist at the Public Library of Cincinnati and Hamilton County who's become the expert on the studio, with a labor-of-love research effort that documents many Herzog sessions. “It’s our music heritage and should be remembered. It shows the city’s contribution to Country and popular music before Nashville had it cranked up.”

A two-sided historical marker will be unveiled Sunday afternoon on Race Street in front of the building that housed Herzog, now home to CityBeat and ArtWorks. That evening's Cincinnati Entertainment Awards will pick up the celebration, adding another link between the area's current musicians and their historical counterparts.

The marker project was sponsored by the Cincinnati USA Music Heritage Foundation, which won approval from the City of Cincinnati Planning Commission. Last year the foundation was instrumental in placing a similar marker at the Brewster Avenue site of King Records.

From the Nation's Station to Herzog Studios

Herzog was Cincinnati’s first commercial recording studio. Powers thinks its ultimate significance for the local music scene is “it turned Cincinnati into a recording town instead of a radio town.”

Groundbreaking tunes in Country, Bluegrass and R&B were cut at Herzog — songs that would become templates for their genres. Just to list a few of the seminal sessions:

• Lester Flatt and Earl Scruggs recorded “Foggy Mountain Breakdown,” one of the most recognizable Bluegrass tunes, in December 1949.

• The Delmore Brothers cut “Freight Train Boogie,” bringing the boogie woogie Blues sound to the hillbilly market in what some call the first Rockabilly song.

• “The Honeydripper,” a song cited by musicologists as laying the foundation for R&B, was recorded in 1945 by Bullmoose Jackson.

The Herzog story — its rise and fall — can’t be told without telling the WLW Country & Western story. By the late ’30s the “nation’s station” was booming out a signal of 500,000 watts, but owner Powel Crosley was under government pressure to justify why he deserved that much wattage.

“His argument was, ‘We are in the center of the population area of the country and there are so many rural areas that don’t have radio service. We are providing that for them,’ ” says Mike Martini of Media Heritage Inc. “Crosley realized he needed to beef up his rural programming to justify that argument.”

WLW began to hire the finest Country & Western singers and musicians in the land. At one point it produced two weekly barn-dance shows, Midwestern Hayride and Boone County Jamboree. One of the great session bands in Country music history, the Pleasant Valley Boys, moved here from Nashville in 1948, lured by the offer to be the house band for the TV version of Midwestern Hayride.

In 1945, WLW engineer E.T. “Bucky” Herzog started a little side project, opening a recording studio just around the corner from the station, which back then was at Ninth and Elm. He realized the cream of the Country music crop was coming through WLW every week to perform and thought maybe they’d want to record.

It was the same thinking that sparked Syd Nathan to found King Records in 1943. But Nathan wouldn’t have a recording studio at his Evanston complex until 1947, so he sent many artists down to Race Street and Bucky Herzog.

Hank Williams came here in 1948 specifically to record with the renowned Pleasant Valley Boys. He’d worked with them previously when they were in Nashville, producing a couple minor hits. He was still looking for the big breakthrough.

They cut three songs in a session booked for three hours. When Williams found he had extra time, he said he wanted to record “Lovesick Blues,” which he’d been performing in concert and on radio shows. His manager, Fred Rose, hated the song. When he learned Williams wanted to cut it, he fumed out of the studio saying, “You got 30 minutes left in the session. Don’t go over the time.”

One take was enough. In Williams’ yearning, pleading voice, it became a signature song.

Released in spring of 1949, “Lovesick Blues” was No. 1 for 16 weeks, earning Williams a performance at the Grand Ole Opry in June that received an unprecedented six encores. The song became the quintessential ballad of lost love, covered by dozens of singers across all genres, ranging from Little Richard and Arlo Guthrie to Linda Ronstadt and LeAnn Rhimes.

Williams would return to Herzog to recapture the magic with the Pleasant Valley Boys in August 1949, recording four more songs.

Meanwhile, Herzog continued to crank out recordings. Record labels like Columbia, RCA and Mercury would send their artists to town. Along with King — which was becoming the country’s most successful independent label — Cincinnati indeed had become Music City.

By the early ’50s, Herzog’s glory days were ending (although King’s were just beginning with its incredible R&B lineup). Studios had opened in Nashville and the emerging Country stars didn’t need to travel to record. And Nathan had built his own studio.

Most significantly, WLW began firing its live musicians, many heading to Nashville, removing the talent pool that fueled Herzog. Crosley sold his station to Avco in 1953, and the new owners started making cuts (in what seems to be a familiar story in corporate broadcasting).

“They looked at other DJs in town spinning discs and making all that money,” Martini says. “Here WLW was with this huge staff of something like 100 musicians. I’m sure they said, ‘Why are we spending all this money when one guy can spin discs?’ ”

Bucky Herzog sold the studio, and the new owner moved it to Mount Adams, mainly doing commercial production. It was gone by 1955.

Yet the studio survived Hank Williams, who would die at age 29 on New Year’s Day 1953, officially of heart failure, likely brought on by alcohol abuse and injections of vitamin and morphine shots. He passed away in the back seat of his chauffeured Cadillac on his way to a concert in Canton.

The Hank Williams Sessions at the E.T. Herzog Recording Company

The historical marker recognizing Herzog’s studio and Hank Williams’ sessions will be unveiled at 1 p.m. Sunday in front of 811 Race St., Downtown. A reception will follow in the former studio space on the second floor. The 13th annual Cincinnati Entertainment Awards start at 7 p.m. Sunday at the Madison Theater, Covington.