Redistricting helped the GOP win the House, and it almost caused the fiscal cliff 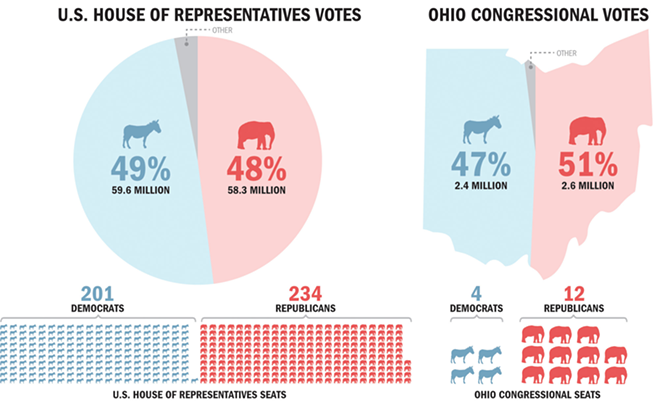 ver the past few weeks, the political drama in Washington, D.C., has circulated around the “fiscal cliff,” a series of tax hikes and spending cuts set to kick in for 2013. On Jan. 1, U.S. Congress narrowly avoided the fiscal cliff. But the close call left some wondering: Could it have been more easily prevented, particularly through redistricting reform?

If Congress had not averted a fiscal cliff, the simultaneous tax hikes and spending cuts would have sent the U.S. economy back into recession. The Congressional Budget Office estimated the wave of budget austerity would have spiked the U.S. unemployment rate to 9.1 percent by the end of 2013, up from November’s rate of 7.7 percent.

The Washington, D.C., drama mostly focused on President Barack Obama, the lead Democrat in talks, and U.S. Speaker John Boehner, the lead Republican in negotiations. Both men claimed that they each had a mandate from voters to pass their own set of policies. Obama, bolstered by big Democratic victories on Nov. 6, said his progressive plan is clearly what voters want. Boehner, bolstered by Republicans holding onto the House, said voters clearly want a bipartisan compromise.

Specifics of the final fiscal cliff deal aside, the debate over who earned a mandate in the Nov. 6 election is based entirely on nonpartisan numbers, and it seems Boehner’s claim to a mandate is flimsy at best and outright false at worst, according to CityBeat’s analysis of election data.

Moreover, CityBeat’s analysis shows state Republicans gained an inordinate number of congressional seats in comparison to their overall voter support. It’s an anomaly that is directly tied to controversial redistricting policies around the nation, including Ohio. And it’s an anomaly that’s helped fuel the gridlock and close calls in the nation’s capital.

During the days following Election Day, political pundits pointed out that any victory Republicans see in the U.S. House of Representatives, which Boehner heads, is not a majority-vote victory. With the full election results in, it’s now clear Republicans claimed the most seats but actually lost the vote in the legislature. While House Republicans gained the votes of 58.3 million Americans, House Democrats gained 59.6 million votes. That puts Democrats at 49.1 percent of the total vote and Republicans at 48.1 percent. Yet Republicans will control the next session of the U.S. House with 234 seats, compared to Democrats’ 201 seats.

By all intents and purposes, this is a clear failure of the U.S. democratic process. The U.S. House is supposed to be the chamber that’s divided proportionally by population. By its nature, whoever wins the most votes should be able to win the House.

So what went wrong? Over the past few years, Republicans have steadily gained control of state governments, including in Ohio, particularly through the tea party movement in 2010. For Republicans, the timing could not have been any better. Those elections just barely preceded redistricting, a process taken up every 10 years that’s meant to adjust for population trends. But instead of using the process to adjust for shifting demographics, politicians — both Democrats and Republicans — typically use the process for political gain.

In Ohio, Republicans seized control of the state government just in time to redraw district boundaries in a way that clearly favors Republican politicians. On a local level, the First Congressional District, home of Cincinnati, was redrawn to include Republican stronghold Warren County, effectively making the district an impossible prospect for any up-and-coming Democrat.

These fairly even results did not translate to a relative distribution in congressional seats: Republicans ended up getting 12 out of 16 U.S. House seats, or 75 percent of seats, while Democrats only got 4 out of 16, or 25 percent.

So while Boehner could probably claim he got a bipartisan mandate from his home state, he can’t claim he got the representation in the U.S. House that voters intended. After all, Ohio voters were close to evenly split when it came to the U.S. House, yet Republicans got three times more seats than Democrats.

But the latest redrawing of district boundaries added Republican-leaning Warren County to the First Congressional District, effectively cancelling out any votes from urban, Democratic-leaning Cincinnati. With all the votes counted, Sinnard lost to Chabot 37.6 percent to 57.7 percent.

The disparity shows the only factor that made Chabot’s victory a big win was Warren County. For all intents and purposes, the race in Hamilton County was fairly close, especially for a candidate like Sinnard who got limited support from his party. In fact, Sinnard apparently didn’t have the resources for even a campaign website, as he never put one up. So the race could have been very different if the district was mostly Hamilton County, like in the past, and Democrats had put up a real fight for the seat, which Democrat Steve Driehaus temporarily took from Chabot in 2008.

But that’s not what happened. In the end, Republicans are keeping the U.S. House despite their candidates losing the overall vote at a national level.

With that kind of momentum, it’s possible Obama could have pushed his preferred plan, which emphasized tax hikes on the wealthiest Americans and stimulus initiatives. Even if he couldn’t get a deal done in the lame-duck session, Obama would have been able to wait for a much friendlier Congress around the corner.

The year-end dynamic would have been completely different. The payroll tax cut, which favors the lower and middle classes, likely would have been approved. Infrastructure spending would have been on the table. Spending cuts would have been dismissed in favor of tax revenue, particularly from the wealthy and the capital gains tax, instead of merely delayed for two months.

But the problems with redistricting go much deeper than the political make-up of the U.S. legislature. Redistricting actually reshapes the opinions of different legislators.

A study from election reform group Fair Vote found politicized redistricting makes both sides of the U.S. House more partisan. As the group explains, by redrawing district boundaries to always favor one side, officials are creating partisan echo chambers. When Chabot visits the First Congressional District, he knows he’s going to win through strong support from conservatives in Hamilton County and especially Warren County. In fact, the only realistic threat to his political career is a Republican primary challenge. That means Chabot has to constantly up the ante on his conservatism in order to shore up the vote from his Republican constituency.

In other words, redistricting encourages politicians to harp on their partisan roots. Even worse, trying to appeal to both sides could actually present a primary challenge within a relatively partisan constituency.

The system is making Congress into two immovable walls, and the result is the ongoing bout of congressional gridlock.

One thing is for sure: Redistricting is a necessary part of American politics. Congressional districts have to be regularly redrawn to adjust for population trends. The problem lies in the politics behind the system.

It’s a problem even former president Ronald Reagan pushed to fix. In his last interview as president, the Republican hero told David Brinkley, “I think that this is a great conflict of interest to ask men holding office, elected from districts, to change the lines of that district to fit the new population changes. … The result is that I think gerrymandering (politicized redistricting) is the basis of what takes place.”

So the problem is clear. What’s the solution? In Ohio, Issue 2 was one measure put in front of the state’s voters. If voters had approved the ballot initiative, redistricting would have been moved from the hands of state officials and into the hands of an independent citizens commission. But voters rejected the measure in big numbers, perhaps due to long, confusing ballot language put in place by the Ohio Ballot Board, which Republican Ohio Secretary of State Jon Husted chairs.

This year, the Ohio legislature is expected to take up reform once again. A bill reforming the system to put a bipartisan commission in charge of redistricting already made its way through the Ohio Senate during the lame-duck session, but the Ohio House didn’t have enough time to study and pass the bill. It’s likely it will come back up as the Ohio legislature reconvenes.

Still, that would only take care of Ohio. The majority of states still deal with redistricting through their state legislatures, with only nine states — Arizona, California, Florida, Hawaii, Idaho, Iowa, Maine, New Jersey and Washington — acting as exceptions.

But as the politicians in charge cling to power, nationwide reform seems unlikely in the near future. As it stands, the United States barely avoided the fiscal cliff, and the deal only delayed big spending cuts. Without politicized redistricting, it’s likely a fiscal cliff crisis would have been a Republican fantasy, not a barely avoided reality.