Both Sides of Wallace Shawn

The beloved family-film star and provocative writer celebrates his two careers at events this weekend. 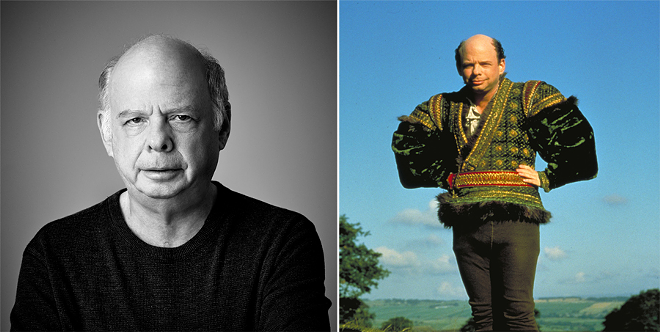 Wallace Shawn is a curious case. The 73-year-old native (and still) New Yorker is best known for his character actor turns in enduring mainstream movies like The Princess Bride and Clueless — a distinctive, amusing presence marked by his diminutive size and high-pitched speaking voice. He’ll be one of the many film and TV stars at this weekend’s Cincinnati Comic Expo at Duke Energy Convention Center; he’s here on Saturday and Sunday to meet and greet fans of his work in such fantasies as the aforementioned Princess Bride, Toy Story (the voice of Rex) and the series Star Trek: Deep Space Nine.

But his real, if lesser seen, big-screen breakthrough came courtesy of 1981’s My Dinner with Andre, a semiautobiographical philosophical comedy of sorts in which Shawn and his buddy — the theater actor, director and writer Andre Gregory — sit in a Manhattan restaurant and talk about everything from Gregory’s spiritual and artistic adventures to Shawn’s love of a good cup of coffee. It’s a provocative, often funny little movie that revealed Shawn’s humanist approach to life and politics. It has become an indie classic.

Which brings us to Shawn’s far lesser known work as a writer: His latest book, the recently published Night Thoughts, is an incisive 75-page essay about nothing less than the story of civilization and how he is “upset about what my species has turned out to be — the species that went mad and destroyed the planet,” as he writes. At 7 p.m. Friday, a day ahead of his Comic Expo appearances, he’ll be discussing and signing copies of that highly literary and intellectual book at Joseph-Beth Booksellers in Cincinnati’s Rookwood Pavilion.

In fact, Shawn had been investigating his interest in humanism and leftist politics for more than a decade before My Dinner with Andre. He’s also a playwright of some accomplishment and controversy — his 1977 play, A Thought in Three Parts, was allegedly investigated by a London vice squad and attacked in Parliament for its pornographic content — and is the author of a previous collection of political essays, 2009’s succinctly titled Essays, which Toni Morrison rightly called “lovely, hilarious and seriously thought-provoking.”

“I’ve written essays before, but I thought, ‘I’m going to write one sort of long essay which contains everything I think I’ve learned about the world and to throw it out there,’ ” Shawn says about Night Thoughts by phone from his apartment in New York City. “I also had been invited by a friend to give a talk at a conference, and by chance my friend is also a publisher. He said, ‘Why don’t you turn your talk into a book?’ And I was eager to do that.”

What Shawn has learned about the world is distilled in the book through what he calls the Lucky vs. the Unlucky. “For the lucky ones on the banks of the Nile, the lucky ones who were right there in the right place at the right time when the river overflowed, it was all fantastic,” he writes early in Night Thoughts. “More could be grown than they even needed — a surplus! How amazing! So, should the surplus be shared with the less lucky people who lived farther from the river and had less fertile soil? No!”

Flash forward to our contemporary situation — we now have a president who was lucky enough to have been born in the most powerful nation on Earth, to a father who gave him a head start unimaginable to all but a miniscule few.

“The United States, from the point of view of someone in Latin America or Asia or the Middle East, has looked like a swaggering bully, drunk with itself — that’s Trump,” Shawn says, his voice a little deeper on cellphone than in his various movie roles. “He’s just a personification of what the United States has looked like for a long time.”

Shawn says the rise of Trump is the culmination of a political and cultural system that has been going down the wrong road for decades now. “I could have written the book, and did write this book, before that particular individual became president,” Shawn says. “I’ve been thinking about these things for many decades, and I suppose why I wrote this book now had more to do with the fact that I thought I was reaching a certain age where if I waited for another year or two or 10, it might be too late. Once you’re dead, you can’t write any books at all.”

Shawn speaks in a deliberate manner. He takes his thoughts seriously, unlike the man who currently occupies the White House.

“Trump to me is just a kind of exaggeration really of the way our country has looked to less privileged people in the United States and around the world during my lifetime,” Shawn says. “He says things very recklessly. He’s ignorant of history. When he speaks, I don’t think he hears that he’s echoing certain things from the 1930s that ended in millions of people being exterminated.”

Serious, sobering thoughts from a man who is best known by kids everywhere as the voice of Rex, the amusing Tyrannosaurs Rex character in the Toy Story movies. Which brings us back to the curious, almost bipolar, nature of Shawn’s life and career. The Princess Bride is in the midst of its 30th anniversary and Shawn has been attending various conventions around the country that are celebrating that fact.

“I’d never heard of them up until this year, but now I’m addicted,” Shawn says of the convention circuit. “I meet as many people as a politician would, but I can have a little exchange with them. Pretty much everybody there is extremely friendly to me.”

“That’s a kind of fantasy, like a dream that almost anybody might have,” he continues. “But instead of having people come up to you and say why they feel you’ve fallen short or why they think your ideas about life are totally wrong, people come up to me and say very nice things. It’s absolutely addictive. It’s mindboggling. It’s exciting for me. It’s an unusual experience in my or really anybody’s life.”