Sacred Beast, Over-the-Rhine’s new diner-meets-bistro, lives up to the hype

Inside the belly of the Beast 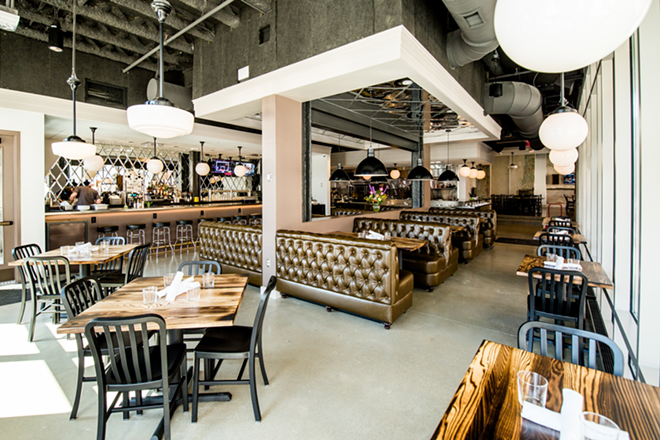 Sometimes a lot of advance hype doesn’t do a new restaurant much good. At least, not unless the place lives up to it.

Sacred Beast qualifies as a case in point. Before I had the chance to eat there, I had heard so much buzz — about the concept, the owners and their impressive pedigree, the physical design and the “simple food, taken seriously” motto — that my expectations were over the moon. A doorman at a favorite cocktail bar said the burger and fries were “awesome.” And then one of my foodie friends wrote on social media that Sacred Beast was “the restaurant of (her) dreams.”

It took me two tries to understand the raves, but then I did become a believer.

First time, I made my way down to the upper reaches of the gentrified portion of Vine Street to meet a friend for lunch. The restaurant feels like one of the largest in OTR, although the effect may be enhanced by its corner location, floor-to-ceiling windows and open floor plan. You have a choice of seating areas, including a back room with tables, plenty of counter stools, roomy leather booths and a few patio tables on one sidewalk. We settled into a two-seater table by the window.

I noticed right away that the drink offerings take up more room on the two-sided paper menu than do the food choices. “Strong Cocktails” dominate one side of the front page, paired with most of the food under the heading, “Now Serving.” On the back you’ll find beer, wine and “craft shots,” or two-ounce cocktails served in shot glasses.

I had to pass on the liquor at noontime but made a mental note to try some of the libations another time. We had a light lunch. Hers was a chopped vegetable salad (no longer on the menu) with a side of french fries and Mornay sauce; I tried the cheeseburger and helped her with the fries. The burger — two three-ounce beef patties with cheddar, lettuce, tomato and a housemade sauce — came naked on a large plate and struck me as nothing special. I prefer a thicker piece of meat with some pink in the middle, which really can’t be done with small patties. The fries didn’t have much crispiness and we thought the sauce was unremarkable. But it was only lunch.

A week later, my husband, two friends and I went for supper. It was early in the week and not busy. It was hard to tell which of the food choices might qualify as a main course, but our server said that the bottom portion of the “Now Serving” column could be considered entrées.

Those entrées include king salmon, steak tartar with french fries and an egg, chicken thighs, hash browns (yes, in the main course section) and the cryptically listed “ham and cheese,” all priced between $13.95-$18.95. Descriptions of these and other presumably lighter dishes are sparse, and you might want to ask before you order. For instance, I assumed ham and cheese meant a sandwich, but actually the dish comes as a creamy concoction with pieces of toast for dipping or spreading that I think  would work best as a shareable appetizer.

We each ordered one of the “strong cocktails,” which I found out later meant strong flavors and not what one would expect — heavy on the booze. Most of the drinks were hits, although my sidecar had too much ice and was too quickly watered down to deliver much strong flavor. But I liked the tall citrusy tequila drink they call Sweet T, and my companions agreed that the house martini and Hemingway Daiquiri tasted great.

It wasn’t easy to decide what to eat, but I’m happy to report that my choice of the Diner Breakfast hit the jackpot. It’s a truly great plate of food and I’d be hard-pressed to order anything else upon a return visit. Soft scrambled eggs, a short stack of ricotta pancakes topped with two strips of maple-glazed pork belly and a small grilled tomato make up this scrumptious meal. Clearly, this kitchen knows how to get the very best out of the humble egg: My husband had the equally delicious omelet filled with a simple combo of goat cheese and sweet peppers. I’ve heard that the deviled eggs with pork rinds and chilies are excellent, as well. 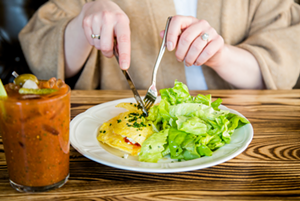 The chicken thighs spiced with turmeric and served with a heaping portion of marinated cucumbers had a tasty mix of flavors, although the chicken came out a bit overcooked. The cucumbers rocked, though. Matzo ball soup rounded out our dinner choices and tasted fine, but it wasn’t quite filling enough to satisfy our friend’s hunger. Overall, the men at our table left feeling a bit underfed, even after the four of us split a couple dishes of chocolate pudding.

Our friend Michael, an architect by trade, made an interesting observation about the diner’s acoustics. He noted that even though we could converse easily, the ambient music also was crystal clear and enjoyable. That makes Sacred Beast unusual among so many eateries not only in OTR but pretty much anywhere you go. Music is often either too loud and adds to a general din or is so faint that it may as well not even be there. When I brought the subject up with chef and owner Jeremy Lieb, he was happy to elaborate.

“Music is so important,” he said. “It’s a big part of the vibe when you walk into a restaurant.” But in most restaurant design music is an afterthought, he added.

Lieb said he put a lot of thought — and money — into working with specialists to install a reel-to-reel system and create a variety of playlists featuring all-analog music. “The acoustics here are about the same as at Music Hall,” he said.

That’s another feature to appreciate while you enjoy those delectable eggs.