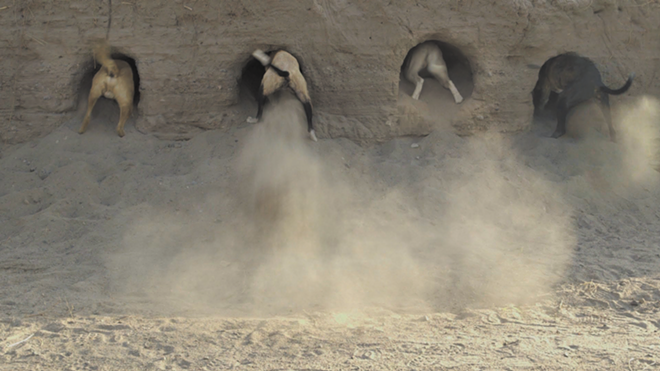 A plaque on the wall at the Contemporary Arts Center’s newly opened Creatures: When Species Meet informs visitors of the etymology of the word “animal.” It comes from the Latin animalis, meaning “having breath” or “soul.” It’s a perfect introduction for an exhibition that celebrates the artistic relationships between human and animal.

After five years as head curator, it also marks Steven Matijcio’s last exhibition with the CAC. In March, he began a new position as director and chief curator at the Blaffer Art Museum on the University of Houston’s campus.

“The genesis of the exhibition happened over five years ago,” he says over the phone from his new office in Texas. It all began when he saw Miguel Calderón’s “The Steps of the Enemy,” which is now featured in Creatures. In a small and dark room, a panther — projected on a screen — paces under a blacklight. Only a pair of glowing blue eyes and a mouthful of pointed canines identifies it. What begins in the panther as a low, guttural growl gives way to the gnashing of teeth and a roar that can be heard across the gallery. As a sense of intrusion sinks in, it’s hard not to jump back. If the panther could talk, it’d probably snarl, “Get out.”

“That piece just hit me in the chest,” Matijcio says. “It resonated with me so deeply in that it was this negotiation of who is the enemy, who is the intruder, who is the aggressor, and trying to find a place of orientation that never quite happens.”

Among the gallery’s many video installations is a more lighthearted feature courtesy of artist William Wegman and one of his famous weimaraner dogs, Man Ray. In the 49-second clip “Spelling Lesson” Man Ray sits at a table after presumably completing a spelling quiz. He whines and tilts his head attentively as Wegman grades his work, offering praise for correctly spelled words and reviewing incorrect ones. It’s a familiar scene to anyone who’s ever spoken to their pet as if they were a person; the video acts as an endearing reminder of the tight-knit, sometimes silly bond between humans and animals.

Dozens more stories delving into complex human-animal relationships unfold at the CAC. In Duke Riley’s luminous “Fly By Night” series, a flock of trained pigeons follows the sound of a whistle as they swoop through the night air above the East River in New York City, carrying LED lights in tiny bands attached to their legs. The use of leg bands — which historically had been used to deliver messages — harkens back to a time when the Brooklyn Navy Yard was home to the country’s largest naval fleet of carrier pigeons. (The last known carrier pigeon, a 29-year-old female named Martha, died at the Cincinnati Zoo in 1914.) In two chromogenic prints, the birds create mesmerizing swirls of blue that appear like shocks of lightning through an otherwise dark sky.

Another collection of work opens a window into animal art therapy. In 1998, Russian-born, U.S.-based artists Vitaly Komar and Alexander Melamid founded the Asian Elephant Art and Conservation Project. Through the AEACP — now a 501c3 organization — they “taught” elephants rescued from Thailand’s logging industry to paint by outfitting them with aprons, giving them paintbrushes to hold with their trunks and encouraging them to make strokes on a sheet of paper or canvas.

Four of these paintings can be seen on display at the CAC. Created by elephants Lukkop, Ramona and Renee, the vibrant Abstractionist works employ the use of color as well as any human artist. Still operating as a charity, the AEACP auctions off most of these paintings. The most expensive was painted by Ruby, a female elephant at the Phoenix Zoo, and was sold for $25,000. The exhibition stays away from work where animals are employed merely as subjects, instead favoring pieces where they are active participants in the process of art making. “I really wanted to highlight work where there was some capacity for change, where the animal — the other — had this possibility of affecting the outcome of the artwork,” Matijcio says.

In one instance, the act of creation called for the presence of live animals. Brian Jungen’s geometric “Plaza 19,” a plywood and carpet-square model of the famous Terrace Plaza Hotel on Sixth and Vine streets downtown, is the palace of a house cat’s dreams. Adoptable cats and kittens from the SPCA lounge in its cubbyholes, supervised by SPCA employees. (In the past, Jungen had cats living in similar structures 24/7, but these cats will only be at the CAC 1-4 p.m. every Saturday.)

There was consideration of how to navigate such an exhibition within the context of animal rights — and Matijcio expresses that he was mindful of how Creatures might be perceived. Art involving animals can easily delve into extremism: Consider Damien Hirst’s controversial use of animal cadavers in works like his 1991 “The Physical Impossibility of Death in the Mind of Someone Living,” which featured a dead tiger shark eerily suspended in a tank of formaldehyde. A lonely ode to the shark — who never lived to see its infamy — the work wouldn’t belong in a collaborative exhibition like Creatures, wherein the CAC has instead erected a shrine to the beauty of animals’ life and agency.

“I think work in the past has grabbed the headlines for all the wrong reasons when artists work with animals,” Matijcio says. “I wanted to show that there could be a more complex dynamic and negotiation that’s happening with the work showcased at the CAC.”

“When I wade into terrain that is unwieldy, yet thought-provoking and inspiring, that’s what I want to pursue,” he continues. “And the CAC gave me that platform to do so. And yes, this exhibition is going to be one that could potentially cause controversy, but I felt like it could inspire passions and conversation. And so to have that be kind of my final gesture at the Contemporary Arts Center, I couldn’t think of anything better.”