A Surprise at Live

The restaurant Live! at the Ludlow Garage hits high notes 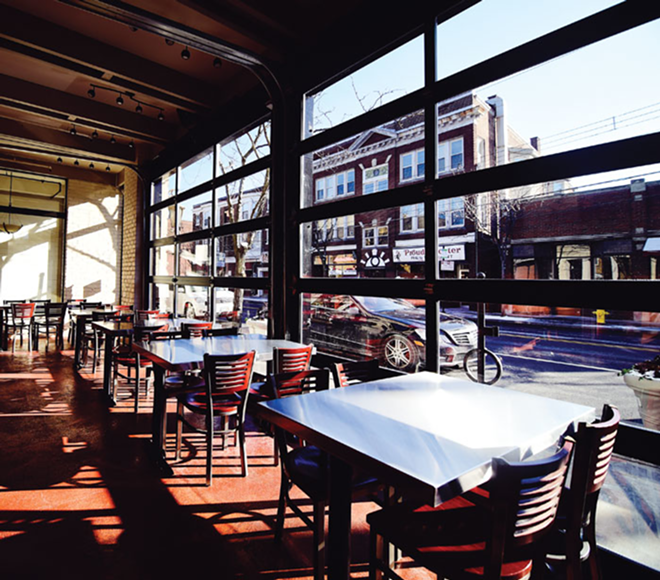 As a Cliftonite, I can think of no better development for which to devoutly wish than a thriving business on Ludlow Avenue, preferably one that includes food. Whether the forthcoming Clifton Market will provide the anchor the neighborhood needs is an open question. But with the late-2015 opening of music venue and restaurant Live! at the Ludlow Garage, perhaps we won’t have to wait to see what the Market contributes.

Acoustic concerts in the newly renovated Garage cellar have been well-received, and owner Scott Crawford says the frequency of bookings will pick up significantly early in 2016. Meanwhile, the upstairs restaurant and bar remains open five nights a week, even when the concert venue is dark. We waited a couple of months for the newness to wear off and then booked a table on a Saturday night.

First impressions didn’t bowl me over. The establishment has no signage — Crawford says a big, impressive one is overdue from his provider — and not much sidewalk appeal. In its previous incarnation as Olive’s, also owned by Crawford, passersby could see a bar and large-screen TVs. But the new configuration has the bar in back, not visible from the street, so all you see is a couple rows of plain-looking tables not usually filled with patrons. I’m told they are working on improvements to make things more inviting.

On our visit, the room was about half filled, and a couple of large tables provided a welcome jolt of weekend festiveness. The host seated our party of four promptly and distributed paper menus with “Live! at the Ludlow Garage” at the top. (An odd choice for a restaurant name, to say the least.) Seating is divided about evenly between tables and booths, and our booth was spaciously comfortable for four.

We started with a round of drinks: Rhinegeist porter ($6) for my husband, glasses of Fourteen Hands merlot ($8) for our friends, and I went with the featured cocktail, dubbed Winter in Clifton ($10). It took a little too long for the cocktail to appear, but the Bulleit rye drink — with cinnamon apple cider, molasses, ginger maple syrup and bitters — was worth the wait. I hope bartender Jake Poole gets more of a chance to show off his mixology chops.

Apparently a forthcoming iteration of the menu will include a selection of his craft cocktails as well as a few new directions with the food offerings.

Owner Crawford worked for a couple of months with chef Steve Hermes — most recently a sous chef at the Anchor-OTR since its opening — to create the current Ludlow Garage menu, which consists of three appetizers ($6-$8), two salads ($6-$9), six entrées ($14-$22), five flatbreads ($9-$10) and a daily soup ($6). There’s also a separate “tapas” menu that serves the music venue on concert nights; it’s simply three different small, cold plates at $5 each — cheese and toast, cured meats or pickled veggies. Wines by the glass ($7-$9) and a separate reserve by-the-bottle selection ($25-$70) are on an additional menu.

For our first course, my husband tried the butternut squash soup with thyme and sour cream, while our friends split a Fall Harvest salad (featuring beets, feta cheese and golden raisins; $9) and I had the small cheese plate ($5). The salad was a standout, and plenty for two to share.

Entrées hit all the right notes, with only one exception: an overcooked pork chop. We all agreed that my hand-cut strip steak with wild mushroom ragu ($21) was stellar; “this is the way steak should be done,” our friend Jim pronounced. He ended up with the steak after our server promptly replaced his ruined bone-in pork chop and chorizo cornbread ($14). Although we couldn’t detect a trace of “wild” mushrooms in the steak’s sauce, the savory button mushrooms had been so perfectly cooked and seasoned that we didn’t need more exotic varieties. The meat had a nice sear and came to the table medium-rare, as requested. The portion was more than we could finish, but not by a lot. Vegetables and potatoes don’t come with most of the entrées, so we ordered a side of green beans with shallots ($5).

We tried one of the flatbreads, saag paneer ($9). It’s definitely an unusual preparation to top a pizza-like creation with an Indian dish, but it worked. This flatbread — with curried paneer, spinach, tomato, red onion, cilantro and Srircha-ranch dressing — is one of several vegetarian offerings, along with a couple of vegan dishes, including fusilli bolognese ($14).

To round out our sampling of as many entrées as possible, my husband — the fish-lover — ordered sea trout with Israeli couscous ($22). He loved the seasoning on the couscous and enjoyed the sea trout, although the portion was a bit smaller than his appetite.

Nobody felt inclined to tackle dessert, of which three were available that night: apple bread pudding with Calvados sauce, a Woodford Reserve Manhattan sundae and vegan crème brulee ($6 each). But the sundae sounded too delicious to resist, so I went ahead and ordered it with the requisite four spoons. The mound of housemade bourbon ice cream came topped with sweet-vermouth cherry sauce and whipped cream, and it tasted just as scrumptious as that sounds. I hope they don’t remove that one from the repertoire.

Bottom line: very good start on the food, but Ludlow Garage needs to work on sidewalk appeal — and that name — to attract diners on the many nights when the music venue is dark.