The show, onstage at Ensemble Theatre Cincinnati, tells the story of 18-year-old Tray, who has been shot and killed in a moment of senseless street violence. 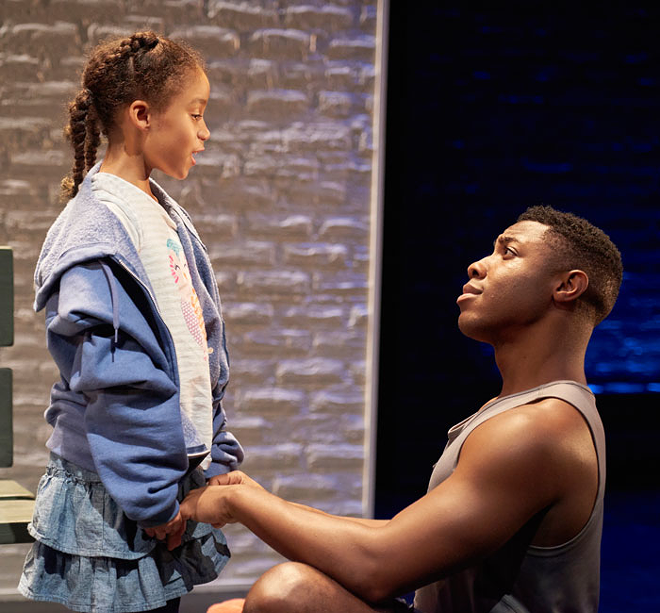 Photo: Ryan Kurtz
It’s a sad state of affairs, but all too real in today’s world: A guiltless youth is gunned down and then barely remembered. That’s the fundamental story of brownsville song (b-side for tray), Kimber Lee’s 90-minute, one-act play that recently opened at Ensemble Theatre Cincinnati. The tough Brownsville neighborhood of Brooklyn is the setting; the “b-side” is a metaphor for the forgotten flipside of a music recording that gets negligible attention, perhaps a quick listen just once.

Lee wastes no time getting to the meat of her play. The show opens with a choked, angry monologue by Tray Thompson’s grandmother Lena (the formidable Deborah Brock-Blanks), who pleas, “Do not begin with me/Do not start your telling with me.” But we do begin with her and her fury mounts: “HE WAS NOT,” she fiercely asserts three times, doing her damnedest to stress that her grandson Tray (Kameron Richardson) should not be misunderstood or relegated to anonymity.

Nevertheless, the truth is, he IS not — alive anymore, that is. A promising kid, 18, a Golden Gloves boxer with college aspirations, Tray has been shot and killed in a moment of senseless street violence. Lee’s storytelling in brownsville song moves back and forth in time, so we meet Tray and his sweet kid sister Devine (Ari Elizabeth Johnson) before the tragedy. We see him banter lovingly with his grandmother and play happily and caringly with his half-sibling. He’s a good, responsible young man who is thoughtful and who aspires to make more of himself, despite having friends (including Chauncey Ragland as Junior) who are clearly running the streets and living dangerously.

We also catch a whiff of the darker corners of his life when his one-time stepmother Merrell (Lissa Urriquia Gapultos), Devine’s mother, resurfaces after an absence of several years. Following Tray’s father’s death, another senseless murder, she descended into addiction and irresponsible behavior, struggling with menial jobs and unemployment. When she randomly turns up as a job applicant at the Starbucks where Tray works, he’s not completely the good-natured teen: His animosity overflows during an interview that becomes an inquisition about her behavior and abandonment of her children. Gapultos nicely conveys Merrell’s reticence and regret, but could do more to capture her desperation.

The story slides from one moment to another, not chronologically. Sometimes we witness grief, other times joy. But it all knits together neatly with the thread of Tray struggling to write a personal essay to apply for a college scholarship. Merrell, a onetime schoolteacher, gives him good advice, and he finally pulls it together. Of course, timing is everything — and Tray runs out before he achieves the desired result.

Lena’s protective manner makes her dubious of Merrell’s motives toward Devine, so there’s tough communications between the show’s two adults, although a rapprochement of sorts eventually dawns, a residual of Tray’s good wishes. We view so many scenes presented with dreamlike brevity — sometimes flowing from past to present or vice versa with little notice — that the story feels more like a song or a poem, with just glimpses of moments, than a fully fleshed-out portrait of a life lived and lost.

There is a choreographic element to brownsville song, proposed by Lee’s script and executed for ETC with supervision by Darnell Pierre Benjamin. Devine is in a school production using melodies from Tchaikovsky’s ballet Swan Lake; the music evolves from a straightforward rendition to one with a heavy Rap beat. She’s disappointed to be cast as a mere tree, but Tray convinces her and demonstrates how to be a tree worthy of notice. He tells her, “You gon be the flyest tree anybody ever did see.” It’s a touching moment early on, especially with Richardson’s beefy physique juxtaposed with the tiny third-grade actress; when it recurs later, it has extreme emotional resonance.

One could argue that Lee’s play romanticizes a very sad moment, and that its characters teeter on the brink of predictable stereotypes. However, with Meyers’ steady directorial hand, this tale is humanized and broadened in a way that audiences will relate to as they feel the pain of loss, the joy of potential and the hope that from such sadness good can still be derived.